Sikh pilgrims have begun to arrive in Pakistan to visit one of their holiest shrines before the birth anniversary of the religion’s founder after India gave them the green light to cross the border.

The Kartarpur corridor is a visa-free crossing allowing Indian Sikhs to visit the temple just 4km (2.5 miles) inside Pakistan where Guru Nanak died in 1539.

The corridor first opened in 2019 for Nanak’s 550th birth anniversary but was closed last year because of the coronavirus pandemic.

The corridor connects Pakistani and Indian Punjab, the birthplace of Sikhism, which was divided between the two countries after they gained independence from Britain in 1947. 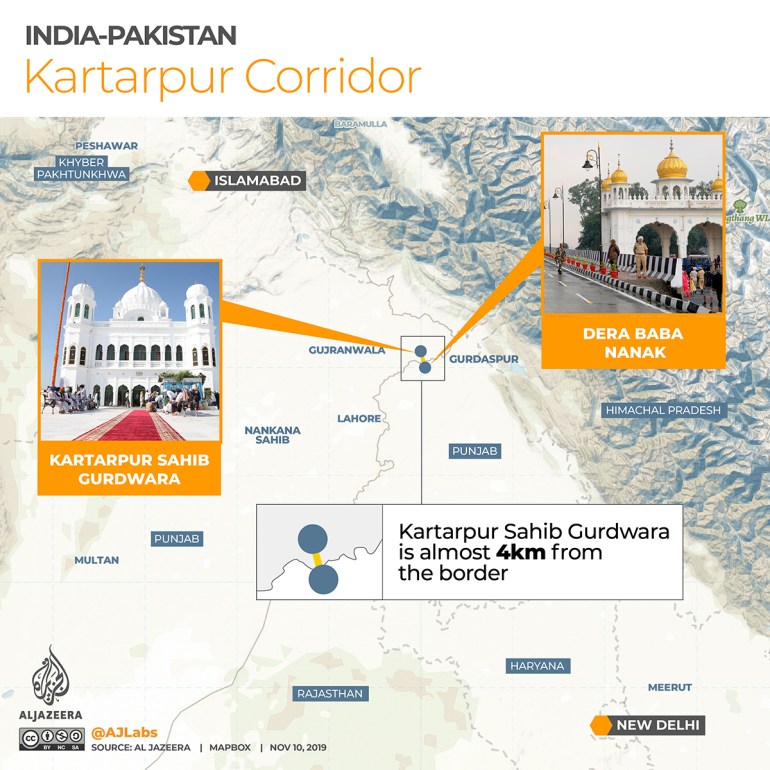 Sikhs are a tiny minority in Muslim-majority Pakistan, although many of their religious sites remain there.

Pakistan and India have a history of bitter relations, having fought three full-scale wars since independence over Kashmir, a Himalayan territory divided between the two countries in parts but claimed by both in its entirety.

Hailed as a peace corridor, the Kartarpur crossing was reopened as the nuclear-armed South Asian rival nations upheld their ceasefire agreement in the disputed region for months.

“In a major decision, that will benefit large numbers of Sikh pilgrims, PM @narendramodi govt has decided to re-open the Kartarpur Sahib Corridor from tomorrow,” India’s Home Minister Amit Shah tweeted on Tuesday.

“I am sure that [the] govt’s decision to reopen the Kartarpur Sahib corridor will further boost the joy and happiness across the country,” Shah added.

Dozens of Sikh men and women from India crossed into Pakistan on the first day of the reopening, said Haji Ashraf, a Pakistani official who received the pilgrims on Wednesday.

Thousands more were expected to pass through the corridor in the coming days to participate in an annual celebration on Friday.

Guru Nanak spent the last 18 years of his life at Kartarpur Sahib. His white-domed shrine is visible from across the border in India.

Sikh pilgrims from India have a difficult time visiting it and have long been demanding a road link and easing of travel permits.

India also opened the Wagah border crossing in Punjab for the weeklong celebrations in Kartarpur.