Mexico says it has granted documents to allow more than 1,500 migrants and asylum seekers who began marching in a north-bound caravan last month to stay and work in the country.

About 3,000 people were in the caravan as it left the southern border city of Tapachula on October 23, with organisers initially planning to head to Mexico City to demand refugee status. Last week, organisers said the dwindling group would instead push on towards the US-Mexico border.

Witnesses say about 1,500 people remain in the caravan, which entered the Gulf state of Veracruz from neighbouring Oaxaca on Tuesday. They had walked about 500 kilometres (300 miles) since their initial departure.

At checkpoints along the way, Mexican immigration agents offered one-year residency permits on humanitarian grounds to those who continue.

The National Migration Institute (INM) said on Tuesday it had given 1,574 foreign nationals migration cards and ensured they could work in Mexico since the caravan set off.

Meanwhile, those who continue to press for the US-Mexico border say they are hopeful they will be granted aid by the administration of President Joe Biden.

“He has to help those of us who really need it,” Elsa Pineda, who said she was fleeing gang violence in Honduras with her eight-year-old daughter, told the AFP news agency.

Erlinda Lopez who fled Nicaragua with her 10-year-old daughter and 14-year-old son because of the “repression” that she said was rampant, also continued the journey.

“All we want is to reach our destination (the United States) and raise our children,” she told the AFP. “We want to be free.”

Mexican officials have denied trying to block the caravan’s progress as the procession, which includes many women and children, contend with extreme heat and exhaustion.

However, they have cracked down on drivers who in the past had offered migrants rides along the route, forcing those in the caravan to proceed entirely by foot.

‘We want to be free’

One of the caravan leaders, meanwhile, accused the Mexican government of treating the migrants like “animals”.

“They don’t see us as human beings,” he told the AFP.

Some of those marching said they were sceptical about the Mexican government’s offer after weeks of mounting tensions between the caravan and authorities.

In early November, National Guard agents shot and killed two migrants and wounded others at a checkpoint.

The National Guard said the truck the migrants were travelling had refused to stop and attempted to ram the agents.

Mexican President Andres Manuel Lopez Obrador later contested that the truck had tried to ram the National Guard members and ordered an investigation into the incident.

Those marching are still hundreds of kilometres away from the US-Mexico border.

If they do reach the US, their admittance by authorities is far from assured as Washington contends with a surge in border crossings, although, the numbers of crossings have begun to gradually decline in recent months.

The Biden administration has continued to use a Trump-era public health rule to expel many migrants crossing the border.

Meanwhile, Biden officials have struggled to end a Trump policy that requires asylum seekers to wait in Mexico – often in makeshift camps – for their cases to be processed.

A federal judge had ordered Washington to reinstate the policy, known as “remain in Mexico”, by the middle of November. 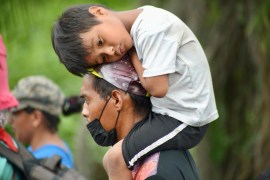 The 2,000-member caravan risks being blocked by Mexican forces or expelled by US officials, if it reaches the border. 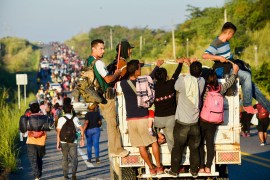 US Customs and Border Protection says migrant encounters at the US-Mexico border in October decreased by 14 percent. 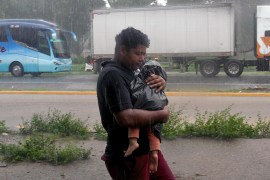 Migrant caravan headed to US border amid Mexico tensions

The group has seen dwindling numbers amid harsh conditions and standoffs with Mexican authorities as it heads north.