Athens, Greece – Sarah Mardini, the Syrian competitive swimmer who was hailed as a hero for saving refugees in peril at sea, is among dozens of humanitarian workers in Greece facing charges that could see them imprisoned for decades.

The trial of the 24 defendants, who worked on the Greek island of Lesbos assisting vulnerable people arriving on Europe’s shores, is set to begin on Thursday.

They were members of an NGO, the Emergency Response Center International (ERCI), a search-and-rescue group that operated on the Greek island from 2016 to 2018.

They face up to eight years in prison for state-secret espionage and disclosure and 25 years in jail for charges including smuggling and money laundering.

Amnesty International has called the accusations “unfair and baseless”.

Three years ago, Mardini and Sean Binder, a German citizen and rescue diver, were volunteering their time on Lesbos when they were arrested on a series of charges, including smuggling, espionage, unlawful use of radio frequencies and fraud.

They spent more than 100 days in pre-trial detention before being released on bail in December 2018.

The trial beginning Thursday could be the first of a possible series of court cases related to the proceedings brought by Greek authorities in 2018.

She and her sister Yusra Mardini, now an Olympic swimmer, were widely celebrated for their bravery and humanitarian spirit. When the engine of the refugee boat they were on failed, they saved 18 fellow passengers by dragging the sinking vessel to safety.

Sarah returned to the island three years later, in 2018, to volunteer on a search-and-rescue mission. There she met Binder, who grew up in Ireland, and the two worked to support asylum seekers arriving on Lesbos before they were arrested.

Rights groups have called for the charges to be dropped and pointed out inconsistencies and inaccuracies in the prosecution’s case.

“The slipshod investigation and absurd charges, including espionage, against people engaged in life-saving work reeks of politically motivated prosecution.”

Colm O’Gorman, head of Amnesty International Ireland, said: “Sean Binder, who grew up in Ireland, has seen an outpouring of support for him from across our society, and we know that the world will be watching what happens in Greece this week. The fact that he and other humanitarians are facing up to 25 years in prison for showing basic human decency and compassion is a moral stain on Europe.

“Seeking asylum is not a crime; trying to save people from drowning at sea is not a crime. Europe has to stop criminalising humanitarians, and to start protecting those fleeing to our shores in search of safety.”

Some spying charges were raised because authorities said the volunteers communicated via an encrypted messaging service, which was revealed to be the commonly used application WhatsApp.

Zacharias Kesses, the lawyer for Mardini and Binder, told Al Jazeera that he has submitted “solid evidence” showing that ERCI communicated with port police whenever it had information so that the police force and the NGO could work together for the best possible outcome for search-and-rescue operations.

“This is the most characteristic incident of judicial harassment against humanitarians,” he said.

“This is the way that they chose three years ago in order to send away humanitarians and NGOs from the islands and they achieved it. This case was very high profile as the first time that volunteers were imprisoned [and] because of this many other volunteers left the islands frightened that they would have the same result.”

Nassos Karakitsos, who was the field director for ECRI and is among those facing charges, told Al Jazeera that the case came as a shock as they had been supporting the Greek Coast Guard and Frontex in their work.

“I am facing 25 years in prison for actually helping people,” he said.

“They try to scare people, that’s why we are afraid because maybe they need us as an example,” he pointed out that the case has made others fearful to help asylum seekers for fear of criminalisation.

“Even now nobody dares to assist people with some water, some food, some blankets.”

The Greek government says it has taken a hardline approach on refugees but considers its policies “firm but fair”.

Greek authorities have however been repeatedly accused of pushing back asylum seekers who have arrived on the Greek territory.

Extensive reporting has shown how asylum seekers, including children and babies, are removed from the Greek islands after their arrival and abandoned at sea in life rafts.

“I feel angry about the fact that we have to go to trial,” Binder told Al Jazeera. “We did nothing wrong, and we are ready to argue that. It’s taken immense financial and emotional cost and we want this to be over, we have nothing to hide.”

He said the case is dissuading aid workers, “and now, three years later, there are no civilian search-and-rescue [teams] left on Lesbos”.

Binder and Karakitsos plan to attend the trial in person, but Mardini, who lives in Germany where she has asylum, is barred from entering Greece – a ban which was not lifted for her day in court.

“Search and rescue is morally and legally the right thing to do, every inch of maritime law requires it,” said Binder.

“Yet we see the securitisation of the border to make a fortress around Europe which casts the most vulnerable as illegal. Because now the crisis is seen through the prism of ‘smuggling’, search and rescuers are thrown in with smugglers, that is the core issue with this false narrative of ‘pull factors’.” 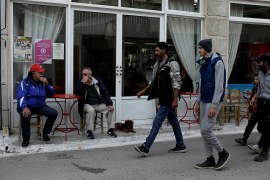 The Greek island’s residents discuss how years of hosting thousands of refugees and migrants have affected them. 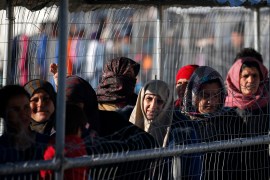 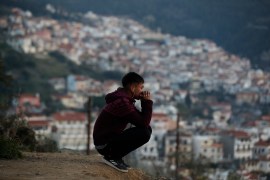 Increased and more violent border policing does not work. It is time to abolish it.