The United States has denounced Russia for conducting a “dangerous and irresponsible” missile strike that blew up one of its own satellites, creating a debris cloud that threatened seven astronauts on board the International Space Station (ISS).

US officials said Washington had not been informed in advance about the test and would talk to allies about how to respond.

“The Russian Federation recklessly conducted a destructive test of a direct-ascent anti-satellite missile against one of its own satellites,” Secretary of State Antony Blinken said in a statement.

Blinken added that the “dangerous and irresponsible test” had generated more than 1,500 pieces of trackable orbital debris and will likely create hundreds of thousands of pieces of smaller orbital debris.

Four Americans, a German and two Russians are currently on board the orbital outpost, a multinational collaborative project involving five space agencies including the United State’s NASA and Russia’s Roscosmos.

They were first asked to close the station’s hatches and then took shelter in their return ships, the standard “safe haven” alarm procedure in the event of an emergency that might force evacuation.

They made their way to the Dragon and Soyuz spacecraft at 2am Eastern Time (07:00 GMT) and remained there for about two hours, NASA said. The ISS continues to pass near or through the cloud every 90 minutes.

NASA administrator Bill Nelson added in a statement he was “outraged by this irresponsible and destabilising action.”

“With its long and storied history in human spaceflight, it is unthinkable that Russia would endanger not only the American and international partner astronauts on the ISS but also their own cosmonauts” as well as Chinese “taikonauts” on board China’s space station, he said.

Britain’s Defence Minister Ben Wallace slammed Russia for the anti-satellite weapons test. “This destructive anti-satellite missile test by Russia shows a complete disregard for the security, safety and sustainability of space,” Wallace said in a post tweeted by the defence ministry.

Russia’s defence ministry on Tuesday admitted to destroying its own satellite during the missile test, but rejected accusations that it had endangered the ISS and its crew.

“The Russian defence ministry successfully conducted a test, as a result of which the Russian spacecraft ‘Tselina-D’, which had been in orbit since 1982, was destroyed,” the military said in a statement.

“The United States knows for certain that the resulting fragments, in terms of test time and orbital parameters, did not and will not pose a threat to orbital stations, spacecraft and space activities,” it said.

Russian Foreign Minister Sergei Lavrov, meanwhile, said the allegation that Moscow’s actions “creates risks for the peaceful use of space is, at the very least, hypocrisy.”

For it’s part, Russia’s space agency reacted to the criticism saying its “main priority” is the safety of the ISS crew.

“For us, the main priority has been and remains to ensure the unconditional safety of the crew,” Roscosmos said in a statement, adding that it was continuing to “monitor the situation”.

The standoff reignites concerns about the growing space arms race, encompassing everything from the development of satellites capable of shunting others out of orbit to laser weapons.

Russia is increasingly flexing its muscles in space as it seeks to reassert global influence under the leadership of Vladimir Putin.

China meanwhile, is developing a weapon known as Shijian-17, with a robot arm capable of grappling space vessels.

“Both China and Russia are increasingly building space into their military capabilities,” the US Director of National Intelligence Avril Haines said at a space seminar in Washington last week.

“They have directed-energy weapons that allow them to essentially blind sensors on various satellites,” she added.

Despite these tensions, the US and Russia have maintained strong space ties since the end of the Cold War, cooperating closely on the ISS, which they built together. 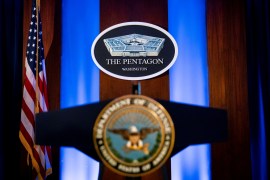 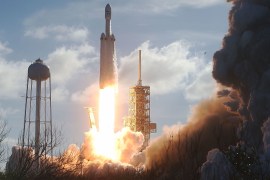 ‘NASA will resume work with SpaceX,’ the agency said in a statement after the US court ruling. 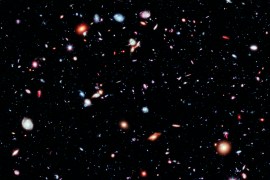 Life in space? Astronomers say search for it is a top priority

New report recommends development of $11bn telescope to explore the origins of black holes, galaxies and the universe.