“I felt like I was banished from the world,” Asmaa al-Natour told Al Jazeera via WhatsApp, messaging from Sjaelsmark, a so-called “return centre” in Denmark, north of Copenhagen.

The 50-year-old Syrian refugee and her husband, Omar, 54, were placed at the site on October 26, almost a year after their residence permits were revoked last November.

They were forced to leave the home they rented for seven years in the central city of Ringsted and are now separated from their two sons – Hani, 25, and Waseem, 21.

They are two of the 90 Syrian refugees who have been told to return to Syria since Denmark began declaring parts of the war-destitute country safe as early as 2019, according to the Danish Refugee Council (DRC).

Al-Natour is despondent about her situation.

“Denmark destroyed my life and my husband’s,” she said. “Since we entered the deportation camp, we feel lifeless.”

The dozens of refugees who have been singled out are not being forced to return – but if they refuse, they must stay in facilities such as Sjaelsmark, run by the Danish Prison and Probation Service – unable to work, study, or even cook their own meals.

Now, human rights groups are ramping up the pressure on Denmark to rescind its decision, and reinstate protections for the refugees – many of whom fear death if they return.

Syria’s capital, Damascus, and its countryside have been deemed safe because they are “not experiencing active hostilities”, said Nadia Hardman, a researcher at Human Rights Watch.

“Our perspective is, yes, but the targeting by the Syrian authorities is indiscriminate,” said Hardman, who recently visited Denmark to present her findings on the potential dangers returning Syrians would likely face.

At the time of publishing, Tesfaye’s office had not responded to Al Jazeera’s request for comment.

Hardman has documented 21 cases of arrest and arbitrary detention, 13 cases of torture, three kidnappings, five extrajudicial killings, 17 enforced disappearances and one case of alleged sexual violence of Syrians who have returned recently from various countries.

Al-Natour is among those who would fear death if she returned.

“I fear for my life and the life of my husband if we go back to Syria, because we will be arrested and killed,” she said.

Al-Natour was active in the early days of the uprising against Syrian President Bashar al-Assad.

“Returning to Syria is like a death sentence for us,” she added.

Other Syrian refugees in Denmark – even those who are able to stay – feel conned by their choice to flee to the Scandinavian country.

“Syrian refugees in Denmark [have] been fooled,” one refugee residing in Copenhagen, who wished to remain anonymous, told Al Jazeera.

“When we made the decision to come to Denmark, Denmark had the most amazing government that I’ve ever seen … they were acting very well with the refugees.”

The man, who arrived in Denmark in 2014, has been granted political asylum and works as a software engineer in the capital. He will soon receive permanent residency.

But he laments the Danish government’s rightward shift on migration policies in recent years, and is sympathetic to the situation of fellow Syrians such as the al-Natours, and the conditions of the prison-run return centres.

The shared bathrooms are “old and filthy” and the rooms are barely furnished, but have “dirty beds”.

Her mental health is also at risk since she is now separated from her sons. Their permits were renewed because they face military conscription in Syria.

“[It’s] not a place where you’re supposed to stay for too long,” she told Al Jazeera.

But even a recent case brought to the European Court of Human Rights, Singer explained, in which the court considered it a violation by Russia to detain and deport a group of Syrian refugees back to Syria, has not prompted Danish authorities to budge on their policy.

Unlike Russia, Denmark is not forcibly sending Syrians back home, Singer further explained, meaning the court is unlikely to act urgently in the cases of refugees in the Scandinavian country.

“There’s an argument that this indirect pressure [of] making people live out their days in return centres could amount to a breach of non-refoulement,” said Hardman, explaining that non-refoulement is one of the most fundamental principles of international law.

The measure forbids a country from returning refugees to a place where there is a credible threat to their life.

Meanwhile, al-Natour and her husband are living in limbo – but they are not without support.

Activists and friends in their previous home of Ringsted have marched for them and others, to call attention to their plight.

“Ringsted has become known in the wider world as the first city in Denmark to lose a Syrian family to a miserable and unworthy life at an exit center,” a Facebook page set up for the protests read. “But we will also be remembered for being the city that shows our compassion and distances itself from Denmark’s inhuman foreign policy.”

Al-Natour hopes for a resolution in her case; she appealed the authorities’ decision in May this year.

The only place she wants to return to is the city that gave her refuge.

“My desire is to return to my normal life, to continue my studies and my life, while I live with my neighbours … in the city I loved, Ringsted,” she said. 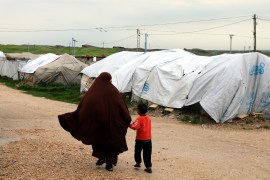 Germany and Denmark repatriate 37 children and 11 women from a camp where suspected ISIL members are being held. 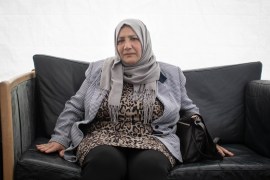 Rihab Kassem, a Palestinian-Syrian refugee, is among hundreds who have been urged to leave the Scandinavian country. 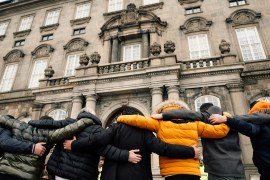 After being told to return to Damascus, Syrians, some of whom arrived as children, stage a sit-in outside parliament.