The secretary-general of Tunisia’s powerful General Labour Union (UGTT) has said the country’s suspended parliament should not be reinstated after President Kais Saied seized political power in July, and has called for fresh legislative elections.

In remarks made to Al Jazeera on Sunday, Noureddine Taboubi said he was reiterating the UGTT’s spokesperson’s stance who urged Tunisians not to reinstate parliament. He had previously stated that Tunisians had suffered from the actions of the now-frozen parliament.

President Saied seized nearly all powers on July 25, suspending the parliament and dismissing the government in a move his critics called a coup, before installing a new prime minister and announcing he could rule by decree.

The president said his actions were needed to end governmental paralysis after years of political squabbling and economic stagnation, and has promised to uphold rights and freedoms won in the 2011 revolution that brought democracy.

His moves appeared to have widespread popularity and thousands of his supporters gathered for a rally to back him last month.

But many Tunisians have repeatedly protested against his actions. On Sunday, thousands rallied on the streets of the capital to demand that Saied restore the parliament and normal democratic rule.

Increasingly vocal opposition, along with a looming crisis in public finances, may pose a new test of how Saied and the new government he has appointed will tackle threats to their authority.

According to Taboubi, in a phone call he had with Saied following Sunday’s anti-government protests, the president was “open” and “listening” to find a solution to the ongoing crisis.

Taboubi said it is essential for the government to review the country’s electoral law to hold legislative elections as soon as possible.

“We have the ability to find solutions through meaningful and calm dialogue,” he said.

UGTT, which has about one million members and is a dominant force in Tunisian politics, called last week for a judicial investigation after a demonstrator died from inhaling tear gas fired by police to disperse protests against the reopening of a landfill site in Aguereb.

Meanwhile, a US State Department spokesman urged the Tunisian government to respect freedom of expression and other civil rights, as stipulated in the Tunisian constitution.

In remarks made to Al Jazeera, the spokesman also urged the government to avoid measures that would restrict democratic discourse. 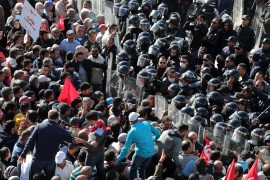 The president in late July sacked the prime minister, suspended parliament and granted himself judicial powers. 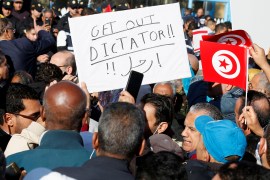 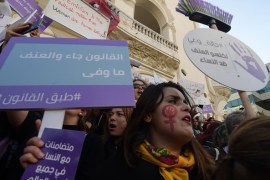