After two weeks of intense negotiations, countries have struck a climate deal at the 26th Conference of the Parties (COP) in Scotland.

Saturday’s Glasgow Climate Pact is the first climate package to directly reference coal and fossil fuels, although many countries were angered by a last-minute change to the text replacing the call to phase “out” the use of coal with a call to phase it “down”.

However, current pledges made at COP26 are unlikely to limit global warming to the 1.5C (2.7F) needed to avert disastrous weather events.

Here, you can see what pledges your country made in Glasgow.

The Glasgow Leaders’ Declaration on Forests and Land Use, signed by more than 141 countries, aims to conserve and restore forests over the next decade and facilitate policies to keep global temperature rise below 2C (3.6F).

The deal, the first major agreement to come out of the summit, includes a $19.2bn pledge.

“The actual work has to be done when everyone comes back from COP,” Anders Haug Larsen, head of policy at the Rainforest Foundation Norway, told Al Jazeera.

“What creates further momentum is that you have these financial pledges … supporting rainforest countries in achieving their targets,” Larsen said.

“With these great sums of money comes a great responsibility for the donors to make sure the funding ends up in the right hands and incentivises further actions.”

Absent from the agreement were India, Bolivia, and Venezuela, which are in the top 20 countries with the largest percentage of land area covered by forest. 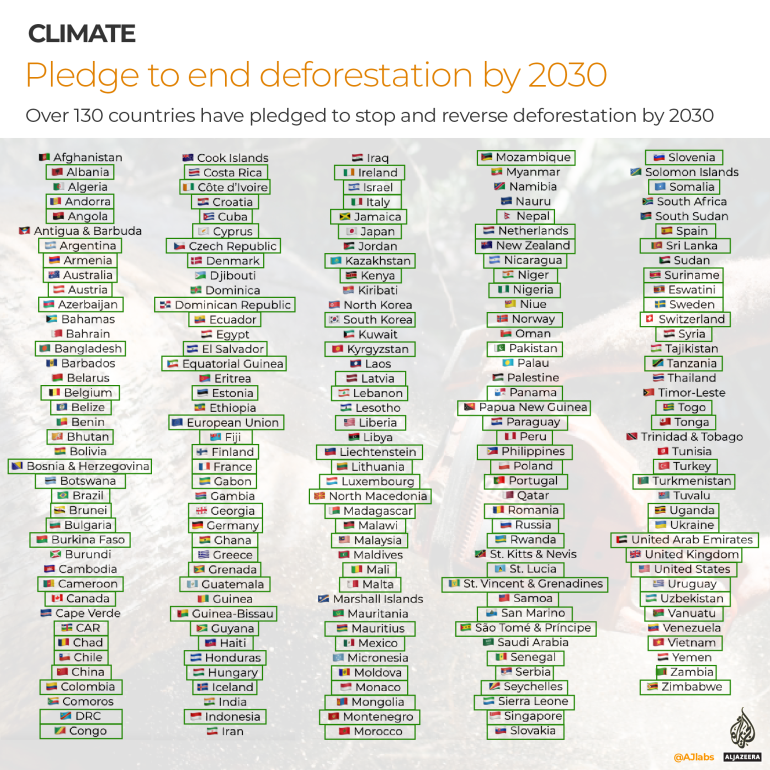 More than 40 countries agreed to phase out their use of coal power while 23 countries signed the COP26 Coal to Clean Power Transition Agreement, committing for the first time to stop constructing and issuing permits for new coal plants.

However, some of the largest coal producers and consumers were absent from the agreement, including China, which was responsible for 54 percent of global coal consumption last year.

Other notable absentees were India, the US, and Australia, who along with China account for nearly three-quarters of coal consumption. 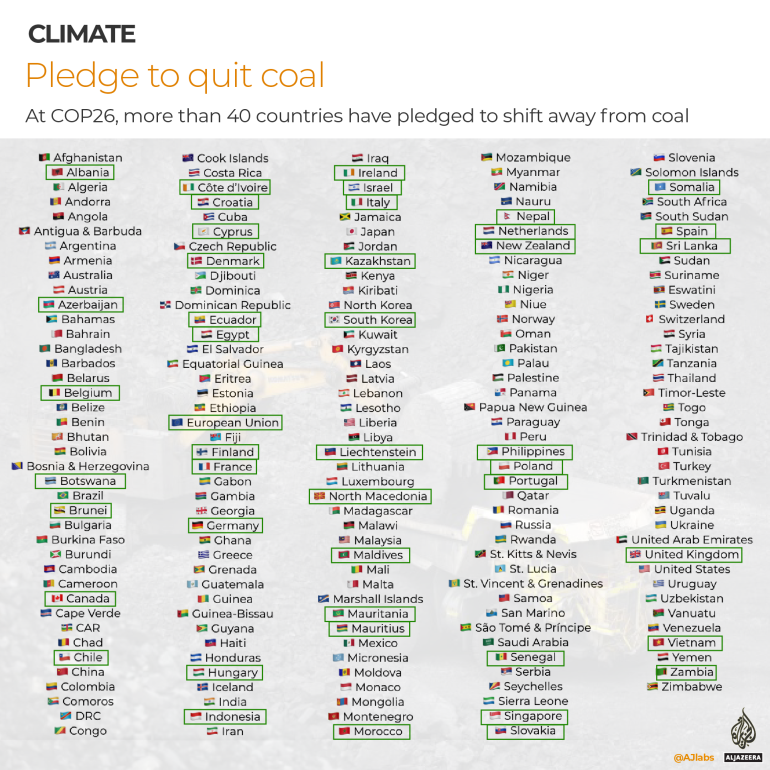 Responding to calls to phase out coal and fossil fuel subsidies on the final day of the COP26 summit, India’s Climate Minister Bhupender Yadav said his country still has to “deal with their development agendas and poverty eradication”.

The final agreement would allow new coal-fired power plants to be built if they are able to capture and store their carbon emissions.

The new wording on coal was a contentious change but was accepted by delegates in order to reach an agreement.

The Global Methane Pledge, which covers countries that are responsible for nearly half of all emissions related to human activity, was proposed by the US and the EU in September.

It aims to reduce global methane emissions by at least 30 percent from 2020 levels by 2030. The top three emitters of methane – China, Russia, and India – did not sign. 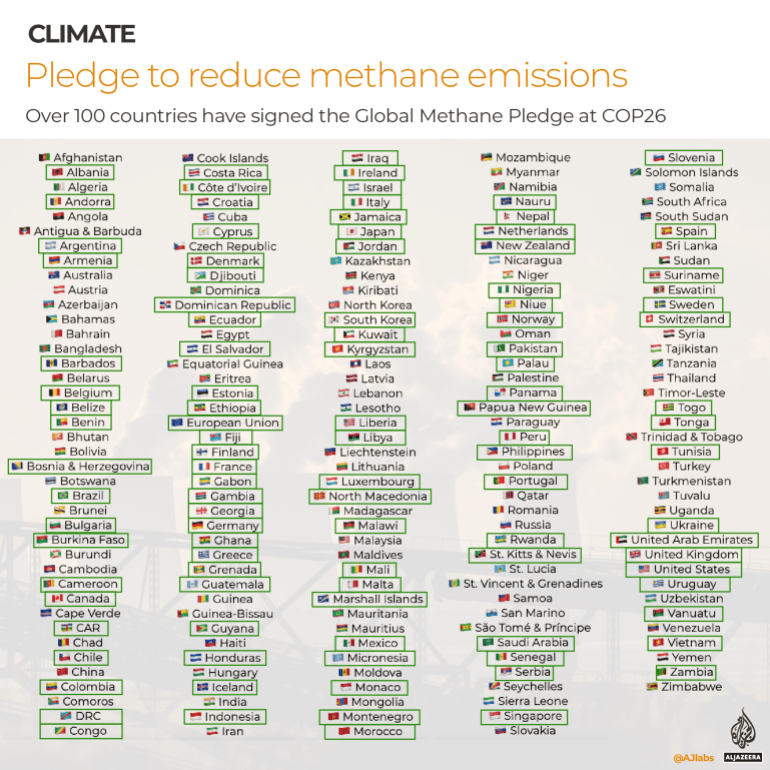 Methane is considered a worse greenhouse gas than carbon dioxide because of its potency to trap heat in the atmosphere.

New research published in Glasgow earlier this week says the short-term goals set out by countries at COP26 will see global temperatures rise by 2.4C (4.32F) by the end of the year, far exceeding the 2C (3.6F) limit of the Paris accord.

A main goal at COP26 was for nations to reach net-zero emissions – the balance between greenhouse gases released and removed from the atmosphere – a target they are urged to achieve by 2050.

A surprise was Prime Minister Narendra Modi’s pledge for India – the world’s third-largest contributor to CO2 emissions – to reach net zero by 2070. Despite missing the 2050 target, it is seen as a significant step.

The commitment includes a promise to secure 50 percent of India’s energy from renewable resources by 2030.

Nigeria also pledged net zero, aiming to reach it by 2060.

A report by Climate Action Tracker says only 6 percent of countries pledging net zero have robust national net-zero targets and that more governments need to improve their targets.

The US and China – the two largest emitters of CO2 – signed an unexpected joint declaration promising to boost climate cooperation over the next decade.

The agreement seeks a reduction in methane emissions, tackling deforestation, and regulating decarbonisation.

China accounts for 28 percent of global CO2 emissions, the US for 15 percent.

Although the commitment has been welcomed, it lacks concrete steps to meet the 1.5C (2.7F) Paris Agreement goal. 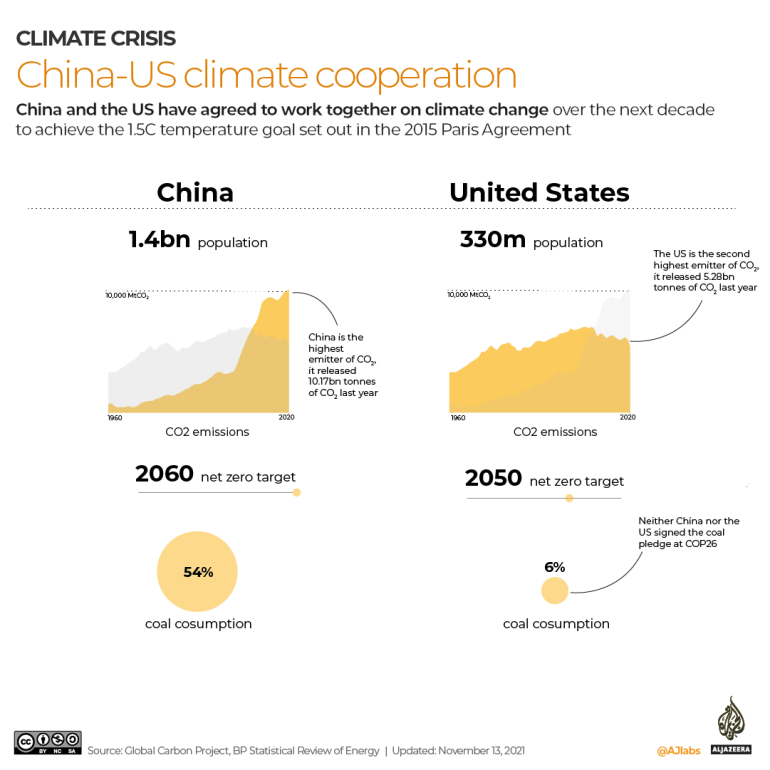 On green technology, more than 40 world leaders agreed on a plan led by the UK to speed up affordable, clean technology by 2030 including zero-emissions vehicles.

Forty-five countries pledged to make farming more sustainable and invest in green agricultural practices. The UK aims for 75 percent of farmers to adopt low-carbon practices by 2030.