A newly founded anti-corruption party in Bulgaria is on course to win the country’s latest parliamentary election, according to four exit polls.

The surveys by Alpha Research, Gallup International, Market Links and Trend showed the centrist party, We Continue The Change, leading Sunday’s election with about 26 percent of the vote.

Former Prime Minister Boyko Borisov’s GERB party was in second with about 23-24 percent.

The results increase the chances of an end to a political deadlock in the European Union’s poorest member state. Political wrangling had prevented Borisov’s opponents from forming a government after two inconclusive elections in April and July.

Bulgarians have grown tired of the impasse, which was seen hampering the country’s economic prospects amid a rise in COVID-19 cases that are overwhelming hospitals.

The founders of We Continue The Change, Kiril Petkov and Assen Vassilev, who both did stints as interim ministers earlier this year, formed their movement in September, tapping into frustrations voiced in massive anti-corruption protests last year.

“Bulgaria is taking a new path,” Petkov, who is aiming for the prime minister’s chair, said after polls closed.

“Left, centre or right, it doesn’t matter,” he said. “If we can stop [corruption] and redistribute money for the wellbeing of the taxpayers, then we should be able to come to an agreement with several parties.”

Petkov promised to be open to dialogue and compromises but said his party would not step back from plans to overhaul the judiciary and clamp down on corruption. He said replacing the chief prosecutor and bolstering the anti-corruption agency would be the critical issues in coalition talks.

Analysts said the new party looked better positioned to seal a coalition with the support of two small anti-corruption groupings and the Socialists. But they noted tough talks lie ahead.

Ivaylo Ditchev of Sofia University told the AFP news agency that We Continue The Change seems likely to form a government “because it can build bridges between the right and the left”.

Another analyst, Boriana Dimitrova of Alpha Research, said the results showed voters’ “mobility and uncertainty” in flocking to support the new party.

But she warned that the 41-year-old Petkov and the 44-year-old Vassilev, though “very enthusiastic”, had little experience in politics and might end up leading an “unstable” coalition.

Five other parties are said to have made it into the 240-seat chamber, according to the Gallup exit poll.

They include the Socialist Party with 14.4 percent support, the ethnic Turkish MRF party with 10.2 percent, the anti-elite There is Such a People party with 8.1 percent, the liberal anti-corruption group Democratic Bulgaria with 7 percent, and the nationalist Revival party with 4.3 percent.

Sunday’s vote for a new parliament and a new president came amid a surge of coronavirus infections.

Bulgaria is the least vaccinated country in the EU, with less than one-third of its adults fully vaccinated. The Balkan country reported 334 COVID-related deaths last week in a single day, a pandemic record.

In the presidential vote, incumbent Rumen Radev, a harsh critic of Borisov, was seen winning about 50 percent support in the first-round vote and looked poised to win a runoff for the largely ceremonial post on November 21.

Radev said Sunday that he voted for freedom, legality, and justice.

“These are the values I stand for,” he said after casting his ballot. “The stakes are huge and will determine whether the process of consolidating statehood will continue or those acting from behind the scenes will regain institutional power.”

Some 6.7 million people were eligible to vote. 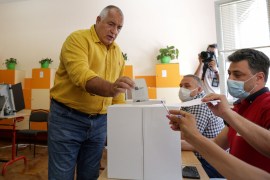 The centre-right GERB party of ex-PM Boyko Borissov and a new populist party were neck-and-neck in exit polls. 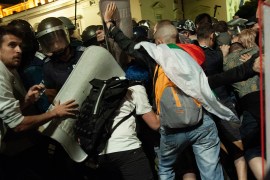 Bulgaria: At the Crossroads

Will growing public disgust at political corruption be enough to bring change to Bulgaria? 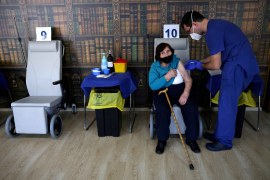 Why does Bulgaria have the EU’s lowest vaccination rates? 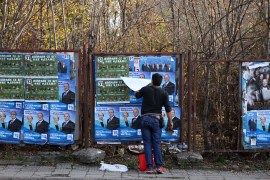 Bulgarians vote in elections for third time this year

Bulgarians head to the polls again after inconclusive April and July general elections.