Global climate talks in Glasgow, Scotland, have ended with an agreement that the United Nations called both an “important step” and a “compromise”, but one that some activists dismissed as a “betrayal of the planet and the people”.

The pact, approved by nearly 200 nations on Saturday, won applause for keeping alive the hope of capping global warming at 1.5 degrees Celsius (2.7 degrees Fahrenheit), but disappointed many with a last-minute change that watered down crucial language about coal.

The revision, promoted by India and backed by China, called for nations to “phase down” rather than “phase out” use of the dirtiest fossil fuel.

The pact also did little to assuage vulnerable countries’ concerns about long-promised financing from rich nations.

Following resistance from the United States and the European Union, the text omitted any reference to a specific finance facility for the “loss and damage” that climate change has already caused in the developing world. Instead, it promised future “dialogue” on the issue.

“The approved texts are a compromise,” said UN Secretary-General Antonio Guterres. “They reflect the interests, the conditions, the contradictions and the state of political will in the world today.”

And while the deal proposes to take important steps, it “is not enough,” he said. “It’s time to go into emergency mode.”

“We emerge from Glasgow having dramatically raised the world’s ambition to solve this challenge in this decade and beyond,” he said, adding: “We are in fact closer than we have ever been before to avoiding climate chaos and securing cleaner air, safer water and a healthier planet.”

“I think our biggest success is to finalize the rulebook,” Zhao told reporters. “Now we can start implementing it and delivering it on our achieved consensus.”

“There’s still a long, long way to go before we can say we’ve dealt with climate change, but the great news is, together, the world has made some important breakthroughs,” he said late on Saturday.

“We’ve kept alive the hope of restricting the growth in temperatures to 1.5 degrees, and we’ve made huge progress on coal, cars, cash and trees. For the first time ever, we’ve got over 190 countries all agreeing to sound the death knell for coal power. And tonight, the developed world has finally acknowledged the need to help poor and vulnerable nations to deal with the loss and damage that’s already being caused by climate change.”

The EU also welcomed the agreement, saying it gave “us a chance of limiting global warming to 1.5 degrees Celsius”.

Commission President Ursula von der Leyen said delegates made progress on commitments to cut back on dangerous emissions, as well as pledges to help developing and vulnerable countries.

“But there will be no time to relax: there is still hard work ahead,” she added.

Meanwhile, the representative from Saudi Arabia, one of the world’s largest oil producers, avoided questions, saying all parties were “happy” with the climate pact.

“We’re good, we’re good,” said Ayman M Shasly, the Saudi representative. “The decision has been adopted. No comment. Everybody’s happy. All parties are happy with the decision so we’re good.”

Lee White, Gabonese Environment Minister and the chair of African negotiators, said the Africa team got “60 percent of what we hoped”.

“We would’ve liked to have made more progress on dependable finance for adaptation,” he said. “But we definitely got a very strong moral engagement from the EU and the US.”

Small island nations, however, said the “incremental progress” at Glasgow was not enough.

“What is balanced and pragmatic to other parties will not help the Maldives adapt in time,” said Aminath Shauna, environment minister for the low-lying Indian Ocean island nation. “It will be too late for the Maldives… We recognise the foundations that this outcome provides, but it does not bring hope to our hearts. It serves as yet another conversation where we put our homes on the line, while those who have other options decide how quickly they want to act to save those who don’t.”

Saleemul Hug, director of the International Centre for Climate Change and Development, was more blunt.

“(I’ve) come here with a single agenda which is to help the poorest people on the planet who are already suffering from the impacts of human-induced climate change. And we needed a Glasgow facility on loss and damage finance here. 138 developing countries put language in the text yesterday. It got removed overnight. It’s not there any more. It has been replaced by an offer for a dialogue … absolutely disappointing and totally unacceptable.”

Other activists echoed the criticism.

“The real work continues outside these halls,” the figurehead of the Fridays for Future movement posted on Twitter. “And we will never give up, ever.”

Asad Rehman, campaigner at War on Want, a group working to end global poverty, described the deal as a “betrayal of people and the planet”.

“It’s a betrayal of the science, it’s a betrayal of the realities of the climate impacts that are happening and devastating people’s lives and livelihoods,” he said. “The only people celebrating this outcome are the hundreds of lobbyists from the oil and gas industry, those whose vested interests basically say, we can’t see any change, we can’t move away from the fossil fuel addiction of our economy.” 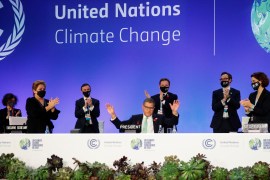 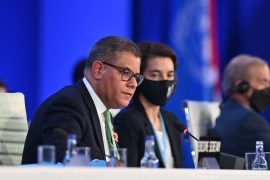 Revised deal was adopted after last-minute change on coal, which drew complaints from vulnerable nations and observers. 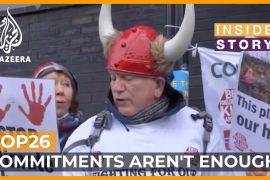 What has the COP26 climate summit achieved?