Ecuador’s Attorney General’s Office has said that through a local court it had frozen the bank accounts of many business leaders and former government officials, including former President Rafael Correa and members of his administration, who were sentenced last year for breaking campaign finance laws.

Correa and 19 others, including his former vice president who is in prison for another corruption case, were accused of accepting $7.5m in bribes in exchange for public contracts to finance his party’s electoral campaigns between 2012 and 2016.

The former president, who was in office from 2007 to 2017, was sentenced to eight years in prison by an Ecuadorian judge in 2020 but has lived in Belgium since leaving office four years ago, evading justice in his home country.

In addition to prison time, those sentenced were ordered to pay a total of $14.7m in reparations to the government, with different amounts according to each individual’s sentence.

So far just three of the 20 convicted in the case, all businessmen, have paid their debt, according to the Attorney General’s Office which made the announcement on Friday.

In a statement, the office also said that, after the account seizures, it would “request the same court order the seizure of property registered in the name of the convicted persons”.

Correa, 58, also has a pending arrest warrant for the alleged kidnapping of a political opponent and is banned from participating in politics for 25 years.

His lawyers could not immediately be reached for comment.

The former leader has denied the accusations, saying they are a political attack by former President Lenin Moreno, who Correa initially backed when Moreno was elected in 2017. 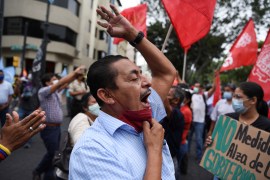 Dozens of people arrested during demonstrations and highway blockades to protest against rising fuel prices. 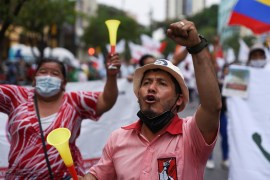 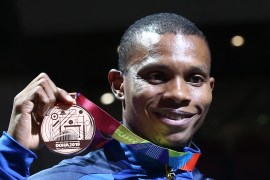