Salvadoran President Nayib Bukele has deployed the military to patrol streets throughout the country in response to a surge in murders this week.

Troops were ordered on Thursday onto the streets of the capital San Salvador, where they used armoured cars to block the exits of some poor neighbourhoods, while police went door to door searching for members of the country’s notorious street gangs.

“We have deployed our national police and armed forces to contain the increase in homicides registered over the last 48 hours,” Bukele posted on Facebook alongside videos of soldiers patrolling the streets.

The military deployment follows more than 30 homicides on Tuesday and Wednesday in the impoverished Central American nation of about 6.5 million people.

El Salvador’s homicide rate had dropped sharply from the violent days of the mid-2010s, when 15 or 20 killings a day were routine, but the country continues to have one of the world’s highest homicide rates.

Prior to an uptick this week, El Salvador had been averaging 3.8 homicides a day. Before Bukele took office in 2018, the average was 9.2 killings a day.

“We know there are dark forces who are working to return us to the past, but this administration is not going to allow it,” the Salvadoran president said on Twitter.

Bukele introduced draconian measures to crack down on gang violence, including the use of lethal force, drawing accusations of human rights violations.

The president circulated photos of tattooed, nearly naked gang members marched into prison yards and made to sit in cramped spaces. He promised to make those responsible for ordering the killings regret it.

On Tuesday, Interior Minister Juan Carlos Bidegain presented a new proposed law to the Legislative Assembly, which requires all civic groups “responding to the interests, being controlled or financed, directly or indirectly by a foreign principal” to register as a “foreign agent.”

The president has accused civic groups of helping organise protest marches against his government. Nonprofit organisations in El Salvador are already required to report all of their donations to the government.

Bukele’s New Ideas party is dominant and is expected to pass the law, which they say is modelled on the US Foreign Agents Registration Act.

The leader of the New Ideas party in Congress, Representative Christian Guevara, said in an interview with state-run television that the gangs and “dark powers” were angry about the proposed law.

Bukele said more measures to halt the violence would be announced in the coming hours. 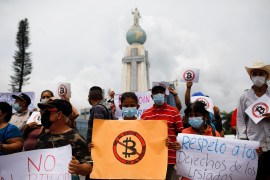 El Salvador has become the first country to adopt Bitcoin as legal tender. But not everybody is happy about it… 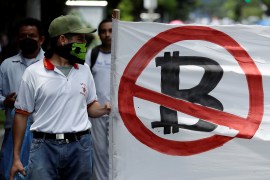 Angry demonstrations, technological glitches, and a dip in the cryptocurrency clouded the rollout in El Salvador. 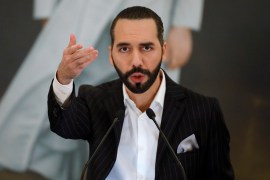 Is El Salvador’s democracy under threat?