A federal judge in the United States has approved a $626m settlement for victims of the lead water crisis in Flint, Michigan, in a case brought by tens of thousands of residents who were affected by the contaminated water.

The payment, awarded on Wednesday, is one of the largest civil settlements in Michigan’s history, and will mainly go to people who were children at the time of the water crisis in Flint.

It will also benefit adults who can prove their illnesses were caused by lead poisoning.

“The settlement reached here is a remarkable achievement for many reasons, not the least of which is that it sets forth a comprehensive compensation program and timeline that is consistent for every qualifying participant,” US District Judge Judith Levy said in a 178-page decision.

The Flint water crisis was one of the country’s worst public health crises in recent memory.

The city’s troubles began in 2014 after it switched its water supply from Lake Huron to Flint River to cut costs. Corrosive river water caused lead to leach from pipes, contaminating the drinking water and causing an outbreak of Legionnaires’ disease.

At least 12 people died from the infection.

The case became emblematic of racial inequality in the US as it afflicted a city where more than half of the 100,000 residents are Black.

The contamination prompted several lawsuits from parents who said their children were showing dangerously high blood levels of lead, which can cause developmental disorders. Lead can be toxic, and children are especially vulnerable.

“This is a historic and momentous day for the residents of Flint, who will finally begin to see justice served,” said Ted Leopold, one of the lead attorneys in the litigation.

Corey Stern, another key lawyer in the case, added in a statement that while the settlement was “a significant victory for Flint, we have a ways to go in stopping Americans from being systematically poisoned in their own homes, schools, and places of work”.

Flint resident Melissa May, however, said the settlement was “in no way, shape or form enough money”.

“The fact is it’s been seven and a half years of us dealing with contaminated water and medical fees. In my home alone, our kitchen and one of our bathrooms are gutted because the water ate through some of the plumbing in the ceiling, and walls and behind our appliances. So that’s tens of thousands of dollars that we had to pay back in loans that we had to take out to be able to have a usable house,” said the 43 year old.

“If we were middle class, or a wealthy white community, this wouldn’t have happened. And if it did, it would have been fixed quickly.”

The settlement was first reached in August 2020, after 18 months of tough negotiations by Attorney General Dana Nessel and Governor Gretchen Whitmer. Both women are Democrats who were elected in 2018 while the litigation was pending.

The bulk of the $626m settlement is coming from the state of Michigan, which was accused of repeatedly overlooking the risks of using the Flint River without properly treating the water.

Flint is paying $20m towards the settlement, while McLaren Health Care Corporation is paying $5m, and an engineering firm, Rowe Professional Services, is paying $1.25m.

Lawsuits still are pending against the US Environmental Protection Agency, McLaren and other engineering firms.

Mays said residents of Flint hope that “adults will be compensated properly” from the pending lawsuits.

“Hopefully the other defendants are smart enough to settle,” she added.

The Flint saga is not over. Nine people, including former Michigan Governor Rick Snyder, have been charged with crimes. They’ve pleaded not guilty and their cases are pending.

The city switched back to a Detroit regional water agency in fall 2015 after doctors publicly reported elevated lead levels in children. 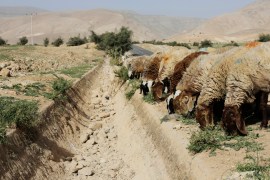 ‘All the trees have died’: Iraqis face intensifying water crisis

Iraqis struggle to cope with depleted water resources, exacerbated by climate change and disputes with neighbours.

In the western United States, climate change deepens a conflict over water between farmers and Indigenous tribes. 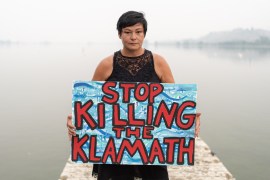 ‘If the fish die, the people die’: Water wars in America’s West

Is a conflict over water between farmers and Indigenous tribes exposing festering racial injustices in Oregon?