Glasgow, Scotland – Climate change researchers at COP26 challenged a final draft communique released by the United Nations on Wednesday, questioning its ability to protect the planet from disastrous weather chaos.

The draft – released ahead of Friday’s final day of negotiations among 197 nations to curtail runaway climate change – was lauded for highlighting the need to end fossil fuel subsidies for the first time, but criticised for vague language on commitments to cut greenhouse gas emissions, and a lack of firm accountability provisions.

Alden Meyer, a senior associate with the European climate think-tank E3G, noted the importance of fossil fuel subsidies being targeted in the draft, but lamented how long it took to be addressed.

He pointed out former US President Barack Obama raised the issue in 2009 at the G20 summit in the state of Pennsylvania.

“It’s absurd 12 years after Pittsburgh that we are still paying taxpayer money and hundreds of billions of dollars a year to encourage production and consumption of fossil fuels,” said Meyer.

“The first rule of holes when you find yourself in one – you stop digging. And we’re still digging the hole deeper by paying people to produce and use more carbon. It’s insane.”

Climate activist Jennifer Morgan noted it will “go down to the wire” whether the subsidies text will be included in the final COP26 document as world leaders haggle over language.

“Of course Saudi Arabia will be working hard not to include that,” said Morgan. “This text needs to be strengthened, not weakened, and I think you will see the most vulnerable countries in the world coming out and just fighting for their lives – which is at stake here.”

The Climate Action Tracker research group noted in a report on Tuesday that under current emission cut pledges, the average global temperature will heat up 2.4C by 2100 – a level that would spell doom for the planet.

Emissions need to be halved by 2030 to limit warming to achieve 1.5C, according to climate scientists. However, the latest data shows instead that emissions will jump 13-16 percent over the next eight years.

“We don’t need incremental steps, we need radical transformational change and it has to happen in the next two years. We are running out of room and time to make the shift that we need,” said Meyer.

Climate observers said the proposed COP26 document was also weak on the crucial issue of climate finance with vague language on commitments and the enforcement of pledges.

Developed nations agreed a decade ago to support developing ones with $100bn per year to protect them from the ravages of climate change, and to transform their economies to run on green energy. 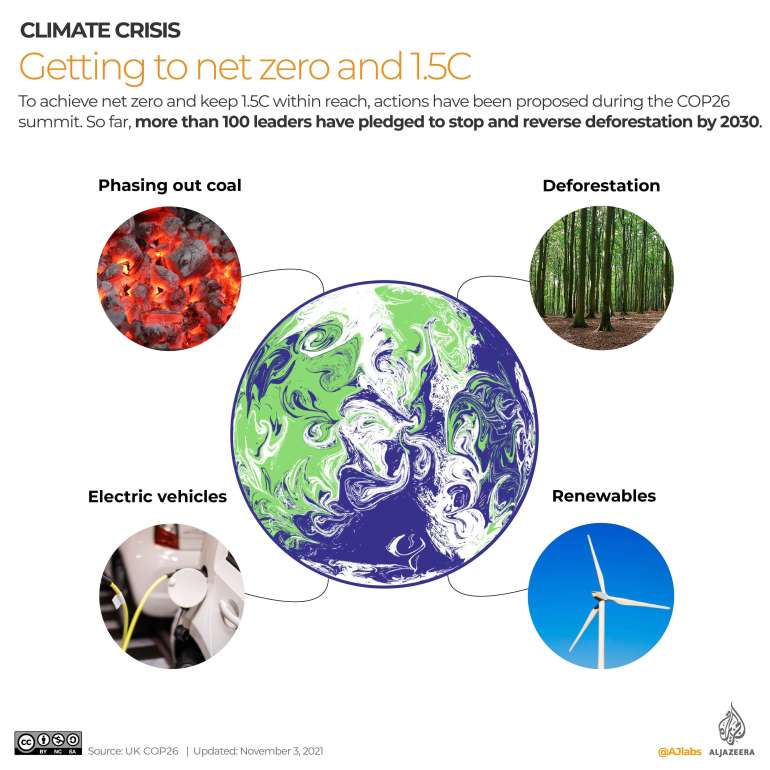 But rich countries – overwhelmingly responsible for flooding the atmosphere with harmful emissions and creating the climate emergency – so far have failed to live up to those financial promises.

The leaders of developing nations remain reluctant to curtail fossil-fuel burning until they receive money and assurances for both climate adaptation measures and renewable energy development.

“You can’t ask developing countries to contribute to keeping 1.5C if you don’t provide the certainty that there will be financial flows to be used for this transition,” said Eddy Perez, international climate diplomacy manager with Climate Action Network Canada.

He also noted $100bn annually was nowhere near enough needed to assist developing countries. “None of these issues are addressed in the [draft] text right now,” said Perez.

The International Energy Agency and the World Bank have said $850bn per year is needed from rich countries for poorer ones to decarbonise their economies.

The leaders of the European Union and United States must work to ensure larger financial commitments are enshrined in the final document produced in Glasgow, so greater emissions cuts are made, said Meyer.

“They all need to be reaching out to the leaders of developing countries to get them on board. That’s the only way to get the package we need,” he said.

“I’ve seen this rodeo many times. It always seems darkest before the dawn, and we’re at that stage in the [COP26 negotiating] process.”

James Cameron, an independent adviser to the COP26 presidency, noted 197 nations are trying to craft language that is acceptable to all in the final document. He said “the package” currently on the table required many compromises by countries.

“The text, which I think is pretty good right now, will be put under pressure in the next 24-48 hours. In some respects I really hope what is there now stays there with one or two adjustments,” Cameron told Al Jazeera.

He described the draft communique as a “general business plan” for governments once COP26 ends and leaders head back home. But he acknowledged its shortfalls.

“People are right to demand that those big statements of intent are implemented. The text … it’s not to be belittled – but equally, it is insufficient to deal with the problems,” said Cameron.