Buildings near the Cumbre Vieja volcano on the Spanish island of La Palma have been engulfed by rivers of lava, with the drama of the red-hot eruption intensified by the spectacle of flashes of lightning.

The volcano began erupting on September 19 and has destroyed more than 800 buildings and forced the evacuation of about 6,000 people from their homes on the island.

La Palma, with a population of about 83,000, is one of the Canary Islands in the Atlantic.

On Saturday, the magma destroyed at least four buildings in the village of Callejon de la Gata, Reuters news agency reported. Lightning flashes were also seen near the eruption early on Saturday.

The lava from the volcano has engulfed more than 150 hectares (370 acres) of farmland. It has also caused huge damage to banana plantations in La Palma – the second-largest producer in the Canary Islands – where the crop accounts for 50 percent of the island’s economy.

Once the black grit lands on the bananas, it is almost impossible to remove.

On Friday, the ash cloud from the eruption disrupted flights on the neighbouring island of Tenerife for several hours.

“When the ash fell we were about to collect the salt, but it completely covered everything creating a crust on top and we cannot separate the salt from the ash. It has completely penetrated the grain. It’s impossible to separate,” Andres Hernandez told Reuters, adding that up to 200 tonnes of salt had been ruined.

The eruption has also deterred visitors to the saltworks, which are also one of the island’s tourist attractions. 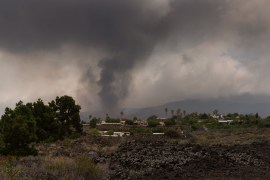 Meeting of the lava with a body of water could cause explosions and produce clouds of toxic gas. 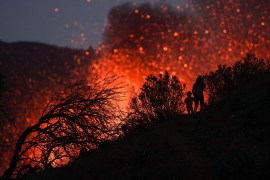 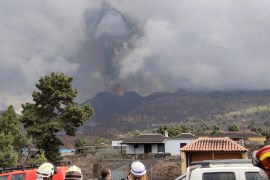