The Kremlin has congratulated Russian journalist Dmitry Muratov for winning this year’s Nobel Peace Prize, hailing him as “talented” and “brave”.

Muratov, chief editor of Russia’s top independent newspaper Novaya Gazeta, was announced the winner of the prestigious award on Friday along with journalist Maria Ressa, of the Philippines.

The 59-year-old is one of Russia’s most respected media figures and has headed Novaya Gazeta for 24 years.

Under his leadership, the newspaper has consistently defied Russian President Vladimir Putin’s Kremlin with probes into wrongdoing and corruption, and extensively covered the conflict in neighbouring Ukraine, which Kyiv accuses Moscow of fuelling.

Kremlin spokesman Dmitry Peskov said of Muratov’s award: “It’s a high appraisal and we congratulate him … He persistently works in accordance with his own ideals, he is devoted to them, he is talented, he is brave.”

Muratov and Ressa were recognised “for their courageous fight for freedom of expression in the Philippines and Russia”, Berit Reiss-Andersen, chair of the Norwegian Nobel Committee, told a news conference in Norway’s capital, Oslo on Friday.

“They are representatives of all journalists who stand up for this ideal in a world in which democracy and freedom of the press face increasingly adverse conditions,” she said.

Co-founded by former Soviet leader Mikhail Gorbachev in 1993, Novaya Gazeta is one of the few independent media outlets currently active in Russia.

Under Putin, the Kremlin has routinely moved to silence critical reporting by shutting down numerous media organisations. It leans heavily on state-media outlets to push pro-Putin propaganda to the public.

“Novaya Gazeta is the most independent newspaper in Russia today, with a fundamentally critical attitude towards power,” Reiss-Andersen said on Friday.

“The newspaper’s fact-based journalism and professional integrity have made it an important source of information on censurable aspects of Russian society rarely mentioned by other media,” she said, citing its work on the Russian military and alleged corruption, police violence and electoral fraud. 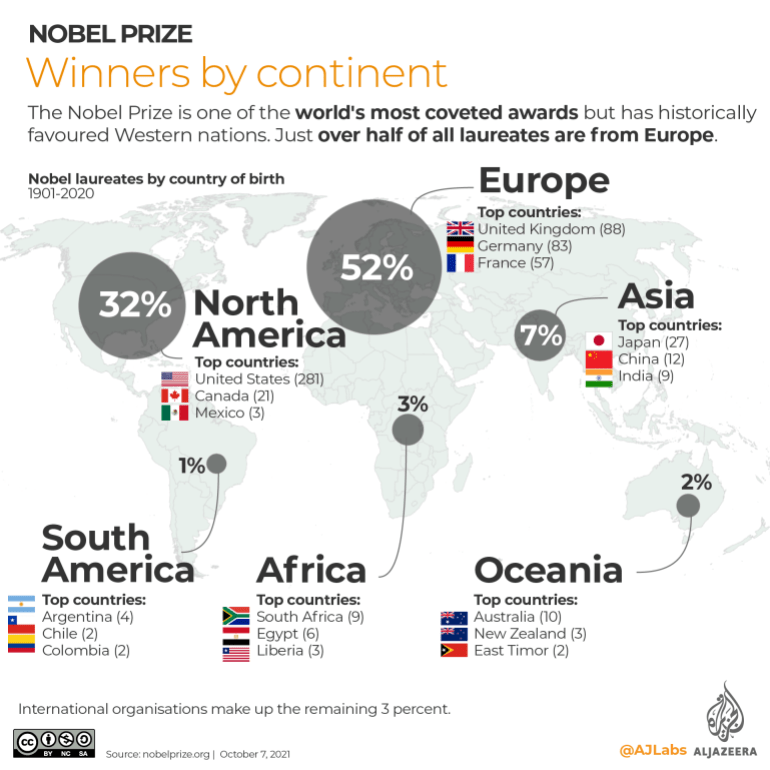 Since 2000, six of Novaya Gazeta’s journalists and contributors have been murdered.

Muratov dedicated his prize to those who “died defending the right of people to freedom of speech”.

“I can’t take credit for this. This is Novaya Gazeta’s,” he was quoted as saying by Russia’s TASS news agency.

A day before the Nobel announcement, Muratov presided over ceremonies at the newspaper’s editorial offices to honour investigative journalist Anna Politkovskaya, who was killed 15 years ago.

Politkovskaya, who had reported critically on Putin and Russia’s 1999-2009 war in Chechnya, was fatally shot on October 7, 2006, in the entrance hall of her apartment block in central Moscow. She was 48.

“Despite the killings and threats, editor-in-chief Muratov has refused to abandon the newspaper’s independent policy,” Reiss-Andersen said.

“He has consistently defended the right of journalists to write anything they want about whatever they want, as long as they comply with the professional and ethical standards of journalism.”