Australia will stop detaining asylum seekers in Papua New Guinea (PNG) at the end of December, the two countries have announced, as the Australian government shuts one of two controversial detention centres it set up in the Pacific that have been criticised by the United Nations.

Under Australia’s hardline immigration policies rolled out in 2013, asylum seekers attempting to reach the country by boat have been sent to detention centres on PNG’s Manus Island and the South Pacific island nation of Nauru.

“The Australian government regional processing contracts in PNG will cease on 31 December 2021 and will not be renewed,” a joint statement read on Wednesday.

“PNG will provide a permanent migration pathway for those wishing to remain in PNG – including access to citizenship, long-term support, settlement packages and family reunification.”

PNG had been pressing Australia to close the centre.

At its peak, Australia detained about 1,000 men on Manus Island. It was quietly emptied of detainees in late 2019, but there are an estimated 100 people who remain in Port Moresby.

Those who are left either are awaiting resettlement to a third country or have had their asylum applications refused.

Hundreds of others are believed to have been resettled in the United States under a deal between Australia and then-US President Barack Obama.

Australia said those who will remain can transfer to Nauru or stay in PNG, where they can seek citizenship.

Earlier this year, Australia and Nauru extended an agreement to allow the continuation of asylum seekers being held on the tiny island.

Australia’s policy of turning away women, children and men fleeing war zones and detaining them in Pacific camps has been widely condemned by refugee advocates, rights groups and the United Nations.

In a statement issued on Wednesday, the Refugee Action Coalition (RAC) denounced Australia’s decision, saying it is “moving to dump the refugees in PNG … they unlawfully sent there in 2013.”

The group pointed out that although PNG immigration is offering better living conditions than the Australian government, “the uncertainties are great”.

“There are still many assaults and robberies; PNG citizenship is very difficult, and the conditions for family reunion are not clear.”

“Shamefully the government is also trying to distance itself from PNG by trafficking refugees from PNG to Nauru,” the group added.

“The only just solution is to end offshore detention, and bring all those presently in PNG and on Nauru to Australia. The Medevac refugees should be freed.” 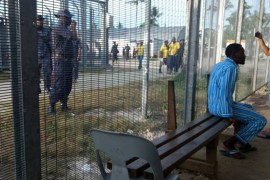 Police try to persuade asylum-seekers to leave prison camp for alternative accommodation in nearby town of Lorengau. 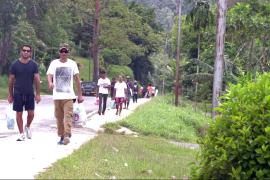 Hundreds of refugees on Manus Island continue to insist they are unsafe among the general population of the island, claiming they are often attacked by young drunk men. 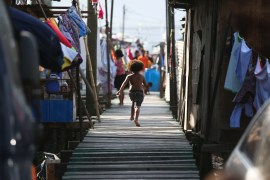