United States President Joe Biden has warned Republicans in the US Senate not to play “Russian roulette” with the country’s economy by continuing to block legislation that would raise the statutory limit on US debt.

Democrats are pushing to raise the debt limit, which will be reached by mid-October, while Republicans have refused to go along with the proposal because they oppose Biden’s spending plans.

Democrats presently need 10 Senate Republicans to agree for the legislation to come up for a vote.

“Raising the debt limit comes down to paying what we already owe”, Biden told reporters at the White House on Monday, calling Republicans’ refusal “reckless and dangerous”.

“We always pay what we owe. We have never failed,” he said. “Raising the debt limit is usually a bipartisan undertaking, and it should be. That’s what is not happening today.”

Biden’s comments come amid days of political wrangling in Washington, DC over efforts to raise the debt ceiling – a move that US Treasury Secretary Janet Yellen and Federal Reserve Chairman Jerome Powell have said is critical to avoid devastating consequences for the US economy.

Yellen said last week that the US government will run out of cash and would be unable to pay its debts by October 18 unless legislators pass a law raising the amount of debt the Treasury Department can issue.

“Our country would likely face a financial crisis and economic recession as a result,” Yellen said.

The US has never defaulted on its debt, and the country’s debt ceiling has been raised or suspended 78 times since 1960 by both Republicans and Democrats.

Senate Democratic leader Chuck Schumer said Congress must get a bill increasing the debt limit to the president’s desk by the end of the week.

He advised senators on Monday that should that deadline not be met, the Senate would remain in session through this coming weekend and into a planned recess the next week.

“Our Republicans colleagues have completely abdicated their responsibility to the nation by refusing to pay for the spending and debts incurred as a result of the bipartisan COVID relief legislation passed during the Trump Administration,” Schumer said.

But Republican Senate leader Mitch McConnell sent Biden a letter on Monday warning Democrats against “playing chicken with the US economy” and telling the president that Republicans would not vote for an increase in the debt ceiling.

Republicans object to Biden’s $3.5-trillion budget plan that would raise taxes on the wealthy and allocate up to $350bn a year across 10 years to social programmes and clean energy policies.

“Republicans will not build Speaker Pelosi and Leader Schumer a shortcut around procedural hurdles they can clear on their own so they have a more convenient path to jam us with a partisan taxing and spending spree,” McConnell wrote.

Democrats have a path to raising the debt limit without Republican votes through a change to Biden’s budget plan, McConnell said.

Democrats are seeking to avoid that procedural route because it would complicate ongoing negotiations on Biden’s ambitious $3.5-trillion budget proposal.

Biden told reporters on Monday that he planned to ask McConnell and Republicans not to use Senate rules to block the bill increasing the debt ceiling from passing on Democratic votes alone.

The Democratic-controlled US House of Representatives passed a debt ceiling increase on September 29 by a vote of 219-212. 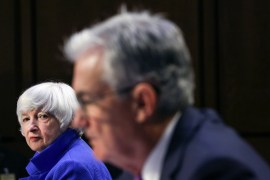 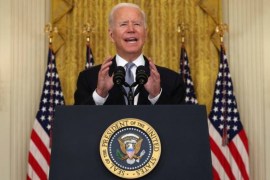 Will Joe Biden pay a political price for Afghanistan?

Uncertainty and fear grips parts of Afghanistan as Taliban returns to power after 20 years. 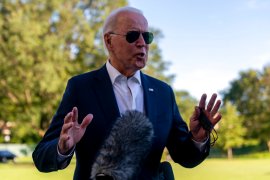