The fighters captured Kombolcha and its airport, said Getachew Reda, a spokesperson for the Tigray People’s Liberation Front (TPLF).

The capture of Kombolcha would be a strategic gain for the Tigrayan fighters against the Ethiopian military and its allies, who are trying to dislodge the Tigrayans from the Amhara region.

The large town is about 380km (235 miles) from the capital, Addis Ababa, and is the furthest south in Amhara that the TPLF has reached since pushing into the region in July. It suggested the TPLF was heading closer to the Ethiopian capital.

Prime Minister Abiy Ahmed urged citizens to join the fight against the TPLF after Tigrayan forces said they took Kombolcha, which is on a highway linking the capital of the landlocked nation to the port of Djibouti.

“Our people should march … with any weapon and resources they have to defend, repulse and bury the terrorist TPLF,” Abiy said in a Facebook post.

“There is currently fierce fighting in Dessie and Kombolcha fronts,” Legesse told a press conference.

In Dessie, residents spoke of hearing gunfire while holed up in their homes.

Desta, a former waiter who gave only his first name, said he saw troops fighting in the streets.

Mohammed, another resident who also declined to give his family name, told the AFP news agency government troops “told us no one should go out”.

“They are firing but I had to close my window … to not get spotted,” he said. “Soldiers told us they are fighting to take the city again.”

A statement from the Ethiopian military communications office said soldiers “are fighting to eliminate the invading force once and for all”.

As fighting erupted in Dessie, many people piled into buses and fled for Kombolcha on Saturday.

But on Sunday, that town too saw an outbreak of violence. “We saw TPLF entering through the main road in the morning, we ran to our homes,” said a 32-year-old resident who gave his name only as Tadesse.

The rebels appeared to be engaged in gun battles with Amhara fighters and Ethiopian soldiers, he said.

Another resident, Amsalu, 34, said gunfire erupted about 9am and intensified during the day. “I hear gunshots in the city … it’s non-stop. I am just sitting at home to be safe,” she said.

The Amhara region – where Dessie is located – renewed calls for residents to sign up to safeguard their neighbourhoods, while the government spokesman Legesse urged citizens to mobilise for battle.

“Every Ethiopian citizen able to fight should mobilise,” he said.

The Amhara regional administration said it “calls on all citizens in the region who are able to fight to register … in the next three days”.

US calls for calm

Meanwhile, Ethiopia’s military carried out an air attack on Tigray on Sunday – the latest in a campaign of air bombardments that began nearly two weeks ago as the military steps up its use of airpower.

The attack near the regional capital of Mekelle targeted a “military training facility [that] served as a recruiting and training centre” for the TPLF, Ethiopia’s government communication service said on Twitter.

No casualties were reported. The government said the facilities bombed were military in nature and aiding the TPLF. 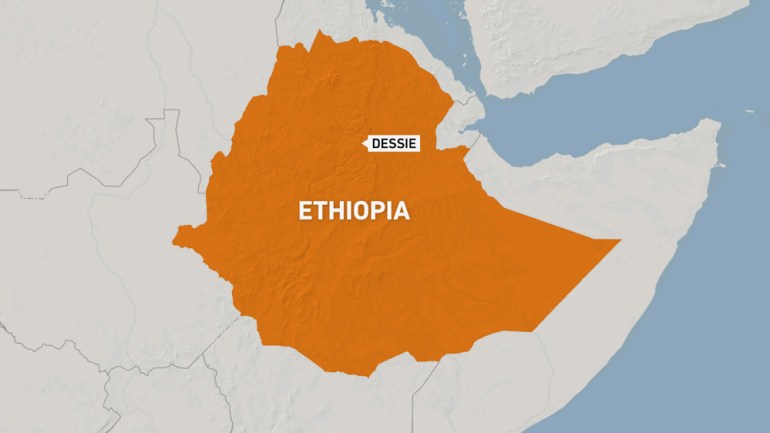 The bombings have drawn international censure and disrupted the United Nations’ access to the region where an estimated 400,000 people face famine-like conditions under a de facto aid blockade.

The United States on Saturday called on the Tigrayan forces to halt their advances in and around Dessie and Kombolcha, withdraw from Amhara and Afar, and not to use artillery against cities.

In a statement, the US urged both sides to begin ceasefire negotiations, saying “there is no military solution to this conflict”.

The conflict erupted last November when Prime Minister Abiy Ahmed deployed troops in Tigray with the operation spiralling into a prolonged war marked by massacres, mass rapes, and a humanitarian crisis.

The 2019 Nobel Peace Prize winner said the operation was in response to attacks on army camps by the TPLF, the regional governing party.

He promised a swift victory, but by late June the rebels had retaken most of Tigray and fighting spread to the neighbouring regions of Amhara and Afar.