At least eight people, including four farmers, have been killed when violence broke out in India’s Uttar Pradesh state after a convoy of cars linked to a federal minister’s son ran over a group of farmers protesting against farm laws, according to local media reports.

Farmers’ outfits said the son of India’s Deputy Home Minister Ajay Kumar Mishra was in one of the cars involved in the accident in Lakhimpur Kheri district of Uttar Pradesh. Mishra however rejected the claim.

Police and several other district officials have confirmed the death toll, but did not share details of the accident that took place at Tikonia-Banbirpur road, some 130km (81 miles) from the state capital, Lucknow.

Farmers were holding protests in Lakhimpur Kheri since Sunday morning against the visit of Mishra and Uttar Pradesh Deputy Chief Minister Keshav Prasad Maurya – both belonging to the BJP.

Farmers’ outfits claim that they were staging a demonstration on the road when the incoming cavalcade ran over a group of protesters in a dramatic escalation of their 10-month-old protest against farm laws that they say will benefit corporates at the cost of millions of farmers.

The government of Prime Minister Narendra Modi insists that the farm laws are important to bring investment in a sector whose contribution to gross domestic product (GDP) has been gradually going down.

Farmers in Haryana’s Ambala took out rally to pay tribute to Shaheeds of Lakhimpur Kheri and to protest against violence against farmers.#लखीमपुर_किसान_नरसंहार

Farmer leaders have demanded actions against the culprits and the removal of the minister from his post.

“We demand the MoS Home [Mishra] be removed from his cabinet rank and murder charges be slapped against his son, who ran his vehicle over the farmers and others involved in the incident,” farmer leader Darshan Pal told Al Jazeera over the phone.

“We also demand that an investigation under the supervision of a Supreme Court judge be ordered into this gruesome incident.”

The farmers’ unions have called for countrywide protests against the incident, Pal said.

Rakesh Tikait, a leading farmer leader, condemned the violence and called on the government to arrest those responsible for farmers’ deaths.

I strongly condemn the barbaric incident in Lakhimpur Kheri. The apathy of @BJP4India towards our farmer brethren pains me deeply.

A delegation of 5 @AITCofficial MPs will be visiting the families of the victims tomorrow. Our farmers will always have our unconditional support.

“The incident in Lakhimpur Kheri is very sad. It has once again exposed the cruel and undemocratic face of the government,” tweeted Tikait.

In August, in the northern Haryana state, one farmer was killed and 10 others injured in police action during a protest against the farm laws.

Following the incident, the enraged farmers burned down three cars, including the minister’s son. Visuals shared on social media showed the vehicles set on fire and a man, apparently injured, lying on the ground, while another footage showed a man being carried by people. Al Jazeera, however, could not confirm the veracity of the video footage.

Mishra denied his son’s involvement in the incident. “My son was not present at the place of the Lakhimpur Kheri incident. I have video evidence. Stones were pelted on BJP workers’ car, which overturned. Two persons came under it and died. BJP workers were lynched after this,” he was quoted as saying by the PTI news agency.

The situation remains tense in the area, as authorities temporarily suspended internet services and deployed additional forces to maintain law and order.

Uttar Pradesh Chief Minister Yogi Adityananth described the incident as “unfortunate” and said an investigation was under way.

The leader of the main opposition Congress party, Rahul Gandhi, called it a “massacre”. “The one who is silent even after seeing this inhuman massacre, he is already dead. But we will not let this sacrifice go in vain – Kisan Satyagraha Zindabad!” he tweeted referring to Prime Minister Modi.

Thousands of farmers have been protesting for more than 10 months on the borders of the Indian capital city New Delhi, demanding the repeal of the three farm laws passed by the Modi government in September last year.

Farmers fear the laws will lead to the gradual end of government farm subsidies, a charge the government denies.

Two months after the laws were passed last year, hundreds of thousands of farmers, mainly from Punjab, Haryana and Uttar Pradesh states, marched on their tractors, motorbikes and on foot to New Delhi to put pressure on the government to repeal them.

Since then, they have been camping on the borders of New Delhi. 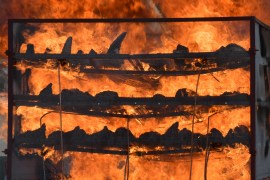 The first ceremony of its kind was held in northeastern India as part of an anti-poaching drive to mark World Rhino Day. 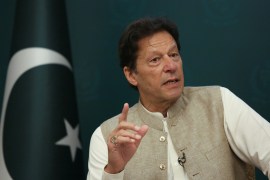 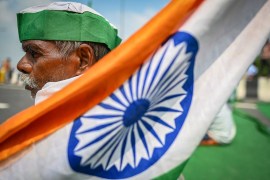 Farmers’ unions across the vast country protest, disrupting road and rail services, to demand repeal of the laws.