China has submitted a revised plan to reduce carbon dioxide emissions before the end of this current decade, but critics say the country that produces 27 percent of global emissions has failed to go further and demonstrate leadership at a critical moment for the planet.

Beijing promised its carbon dioxide emissions would peak before 2030, and that it would aim for “carbon neutrality” – or no net emissions of CO2 – before the year 2060, three days ahead of the COP26 summit in Glasgow that begins on Sunday,

“As President Xi Jinping reiterated, to address climate change is not at others’ request but on China’s own initiative. It is what China needs to do to achieve sustainable development at home, as well as to fulfill its due obligation to build a community with a shared future for mankind,” it said in the plan, which was submitted to the UN on Thursday.

“China will implement a proactive national strategy on climate change.”

To achieve its target, China said that it will lower CO2 emissions per unit of GDP by more than 65 percent from the 2005 level.

It will also increase the share of non-fossil fuels in primary energy consumption to approximately 25 percent, increase the forest stock volume by 6 billion cubic meters from the 2005 level, and bring its total installed capacity of wind and solar power to more than 1.2 billion kilowatts by 2030.

As well as new solar and wind farms, China is also planning to build new hydroelectric dams on the upper reaches of the Yangtze, Mekong and Yellow rivers, and make more use of new-generation nuclear technology, including small-scale offshore reactors.

China also vowed to reduce coal consumption between 2025 and 2030. Coal, which is considered one of the most polluting of fossil fuels, accounts for more than 60 per cent China’s energy supply. But with the country’s ongoing energy crunch, it is unclear how it will cut down on coal consumption in the near term.

“China has made significant progress in fulfilling its commitments in an active and pragmatic manner,” the plan said.

Climate watchers have been looking closely for signs that China, the world’s biggest source of climate-warming greenhouse gases, might make more ambitious pledges ahead of the Glasgow talks.

In an interview with New Scientist, climate expert Bernice Lee of Chatham House, a British think-tank, welcomed China’s promise to peak emissions before 2030, which she described as an “upgrade” of a previous commitment to “peaking of carbon dioxide emissions around 2030 and making best efforts to peak early”.

But she added, “You can’t sugar-coat (it), it is disappointing. The world was expecting more from China at this point. It has missed a chance to slow global leadership.”

Joanna Lewis, an expert in China, climate and energy at Georgetown University, also told the Associated Press news agency that as the world’s top emitter of carbon dioxide and other greenhouse gasses that cause global warming, China’s revised goal was “disappointing” and did not offer “anything new”.

Lauri Myllyvirta, lead analyst at the Centre for Research on Energy and Clean Air in Helsinki, noted China’s latest pledges gave no answers to key questions about the country’s emissions.

“At what level will emissions peak and how fast should they fall after the peak?”

China's decision on its NDC casts a shadow on the global climate effort. In light of the domestic economic uncertainties, the country appears hesitant to embrace stronger near term targets, and missed an opportunity to demonstrate ambition.

Nations participating in the UN climate conference, known as the 26th Conference of Parties, or COP26, submit what are called “nationally determined contributions” that lay out emissions reduction plans.

Lewis of Georgetown University said that it was still possible that China would make additional announcements at the climate summit related to financing for renewable energy overseas.

But Li Shuo, of Greenpeace East Asia, said that China’s latest plan “casts a shadow on the global climate effort”.

“In light of the domestic economic uncertainties, the country appears hesitant to embrace stronger near term targets, and missed an opportunity to demonstrate ambition,” he wrote on Twitter.

“China’s choice epitomises the lack of determination to step up action among major economies,” Li added.

Also putting another damper to China’s involvement in the push for climate action is the absence of Chinese President Xi Jinping from the meeting. 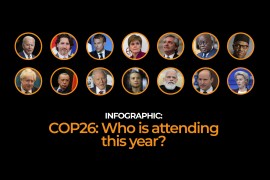 Infographic: Who is attending COP26?

Leaders from around the world and other notable figures set to meet in Glasgow to discuss climate crisis. 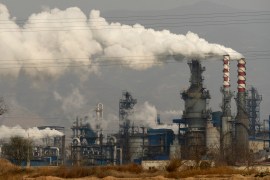 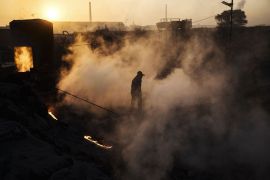