The European Union has fined Poland $1.2m a day for not suspending a disciplinary chamber for judges, deepening a row over judicial independence an the primacy of EU law.

The European Court of Justice imposed the penalty on on Wednesday after Poland failed to comply with an earlier ruling in July ordering it to immediately halt the activities of the chamber.

Many Polish judges view the chamber as a tool to pressure judges to rule in favour of the governing authorities.

“In the ruling issued today, the Vice-President of the Tribunal obliged Poland to pay…a penalty payment of EUR 1 million per day, counting from the date on which this ruling was delivered to Poland,” read the statement from the Court of Justice of the European Union (CJEU).

The move was “necessary in order to avoid serious and irreparable harm to the legal order of the European Union and to the values on which that Union is founded,” the court said, “in particular, that of the rule of law”.

#ECJ Vice-President orders #Poland to pay a daily fine of €1m for not suspending national legislation relating, in particular, to the jurisdiction of the Disciplinary Chamber of the Supreme Court #RuleOfLaw
👉https://t.co/ATb3CgbPxg

It came after a weeklong war of words in which Poland told the EU to stay out of its judicial affairs while other EU nations insisted that Warsaw could not continue to get huge EU subsidies while disregarding the bloc’s democratic principles at will.

Polish Prime Minister Mateusz Morawiecki told European leaders last week that the chamber will be abolished, but he gave no precise time for when that would take place.

Meanwhile, several EU leaders at the meeting said Brussels should not release 36 billion euros ($42bn) in pandemic recovery money that Poland badly wants while the issue is unresolved.

The Polish government did not immediately comment on whether it would pay the latest fine.

But Piotr Muller, spokesman for the Polish government, wrote on Twitter that the “path of punishments and blackmail towards our country is not the right one”.

“The CJEU completely disregards and ignores the Polish constitution and the judgments of the Constitutional Tribunal,” he wrote on Twitter.

Ruling nationalists Law and Justice (PiS) say the European Union executive, the European Commission, is overstepping its mandate by trying to stop its judicial reforms.

At the request of Morawiecki, Poland’s Constitutional Tribunal has examined whether certain elements of the EU treaties were compatible with the Polish constitution.

The court, stacked with ruling party loyalists, ruled earlier this month that they were not.

Critics say the ruling has said created an existential problem for the bloc by questioning the primacy of EU law, a tenet of European integration. They say it has also raised questions over the future place of Poland’s future place in the union.

Pieter Cleppe, editor of the Brussels Report, said he does not expect the Polish government to comply with the latest ruling.

“You could expect now the polish government to say well sorry we are not able to pay this fine because our own Polish constitutional court has said that this will not be in line with the constitution,” he told Al Jazeera.

The fine imposed on Wednesday comes on top of a 500,000 euro daily fine that the Court of Justice ordered Poland last month to pay for having ignored its injunction to close the Turow brown coal mine.

The ruling came in a dispute between Poland and the Czech Republic.

Poland argues it cannot do without the 7 percent of its energy that the Turow power plant is generating. Morawiecki has indicated Poland is prepared to pay, and can afford it. 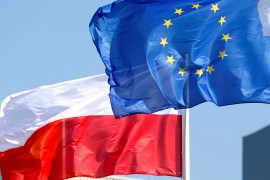 New poll suggests strong public disapproval of the stance the Polish government has taken in legal row with Brussels. 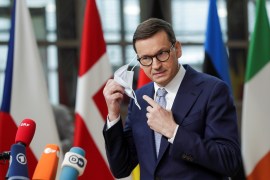 Leaders urge defiant Polish PM to fall back into line, hoping dialogue will stave off a fundamental crisis. 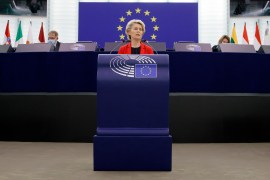