At least 11 people have been killed and others wounded in an ISIL (ISIS) attack on a village in Diyala province in eastern Iraq, according to the country’s security forces.

The attack on Tuesday targeted “defenceless civilians” in the village of al-Hawasha, near the town of Muqdadiya, the Joint Operations Command said in a statement.

Police said the gunmen used several vehicles and semi-automatic guns in their attack.

The Associated Press news agency cited two officials as saying that ISIL fighters had kidnapped two villagers earlier and then raided the village when their demands for ransom were not met. The dead and wounded were all civilians, they added.

In a Twitter post, Iraqi President Barham Salih denounced the attack as a “despicable attempt to destabilise” Iraq. He said the country needed to boost its security, address security gaps and “not underestimate the threat of ISIL”.

At its peak, ISIL controlled vast swaths of territory in Iraq and neighbouring Syria under its self-proclaimed “caliphate”.

Attacks targeting civilians have become rare in Iraq since ISIL was largely defeated in the country in 2017, although it remains active through sleeper cells in many areas.

A roadside bomb attack targeted a suburb of the capital, Baghdad, in July, killing at least 30 people and wounding dozens of others at a crowded market.

In January, twin suicide bombings ripped through a busy market in Baghdad, killing at least 32 people and wounding dozens. Iraqi officials blamed ISIL for those attacks. 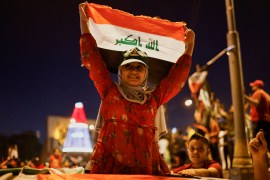 What’s next for Iraq after first election since mass protests?

Millions boycotted the polls out of distrust of the government, but pro-reform independents did make some gains. 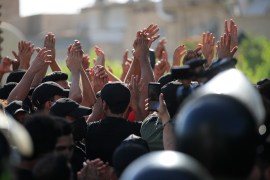 Hundreds of Iraq’s Hashd al-Shaabi supporters protest against ‘fraud’ and call for a recount of the October 10 vote. 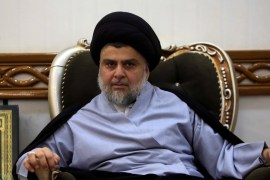 Al-Sadr’s party controls 70 of a total 329 parliamentary seats in Iraq and the movement has a large base across country.