The African Union (AU) has said it suspended Sudan from all its activities after the country’s military overthrew the civilian-led transitional government in a coup.

The African Union Political Affairs Peace and Security on Wednesday tweeted the news of the suspension, an expected move typically taken in the wake of military coups.

In a communique, the pan-African body said the suspension would be in place until “the effective restoration” of the transitional authority steering the country towards elections.

AUPSC decides to suspend the participation of the Republic of Sudan in all AU activities until the effective restoration of the civilian-led Transitional Authority; Welcomes the release of the PM; Calls for the immediate release of the ministers & civilian officials in detention pic.twitter.com/4uYOzMiLzc

It came as the World Bank also on Wednesday followed the United States in suspending aid to Sudan following the widely condemned military takeover.

Meanwhile, state oil company workers and doctors said they would join a growing campaign of civil disobedience called by a coalition of unions against the power grab.

Soldiers on Monday seized Prime Minister Abdalla Hamdok and briefly detained him in the coup that came just more than two years into a fragile power-sharing arrangement between the military and civilians after the former removed longtime President Omar al-Bashir in April 2019 in the wake of mass protests against his rule.

The news prompted tens of thousands of pro-democracy demonstrators to pour into the streets of the capital, Khartoum, and its twin city Omdurman. The demonstrations met gunfire by the security forces, with at least seven people killed and dozens more wounded, according to health sources.

Protesters returned to the streets on Tuesday despite the security forces’ violent response, blocking roads with burning tyres and setting up barricades.

A group of neighbourhood committees in Khartoum announced on Wednesday plans for further protests, leading to what it said would be a “march of millions” on Saturday. In one Khartoum neighbourhood, a Reuters journalist saw soldiers and armed people in civilian clothes removing barricades erected by protesters.

A few hundred metres away, youths came out to build barricades again minutes later. One of them said, “We want civilian rule. We won’t get tired.”

In a televised speech on Tuesday, al-Burhan defended the military’s move, saying it was meant to avoid a civil war. He also pledged to hold elections, as planned, in July 2023, and to appoint a technocratic government in the meantime.

But critics doubt the military is serious about eventually ceding control, noting that the coup came just weeks before Burhan was supposed to hand over the leadership of the Sovereign Council, to a civilian.

Following widespread international condemnation, the military allowed Hamdok and his wife to return home under guard on Tuesday night. 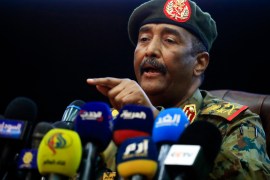 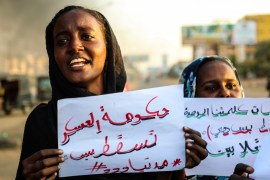 ‘No to army rule’: Pro-democracy protesters take to Sudan streets 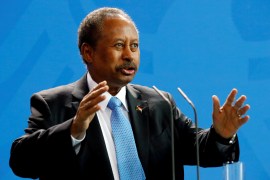