Devout Roman Catholic Joe Biden is scheduled to meet Pope Francis in the Vatican on Friday at a time when the US president is under intense pressure for his conflicted position in the dispute over abortion rights.

Biden goes to weekly Mass regularly and keeps a picture of the pope behind his desk in the Oval Office. He has said he is personally opposed to abortion but as an elected leader cannot impose his views.

But conservative Catholic media and US conservative bishops have criticised him for that stand, with some saying he should be banned from receiving communion, the central sacrament of the faith.

At the same time, supporters of abortion rights have been horrified by a new Texas law that imposes a near-total ban on abortion. Biden’s administration has challenged the law and the Supreme Court will hear the case next Monday.

It is not known if Biden and Pope Francis will discuss the abortion and communion disputes at their private meeting on Friday, their first since Biden took office.

“It’s clear that the pope does not agree with the president about abortion. He’s made that exceptionally clear,” Archbishop William Lori of Baltimore told Catholic News Service.

Asked about the US communion debate last month, the pope told reporters abortion is “murder”. But he also appeared to criticise US Catholic bishops for dealing with the issue in a political rather than pastoral way.

“Communion is not a prize for the perfect … communion is a gift, the presence of Jesus and his Church,” the pope said.

Bishops should use “compassion and tenderness” with Catholic politicians who support abortion rights, he said.

Since his election in 2013 as the first Latin American pope, Francis has said that while the Church should oppose abortion it should not become an all-consuming battle in culture wars that detract attention from issues such as immigration and poverty.

Jo Renee Formicola, political science professor at Seton Hall University, said the meeting should help Biden in his standoff with the US bishops on abortion and shift the spotlight to social justice concerns the two men share.

“The optics of the pope meeting with Biden basically says to the American (Catholic) hierarchy: ‘Listen, this man and I have the same agenda … don’t expect that I am going to compromise my teachings on things like the environment and immigration,'” she told Reuters in a telephone interview.

In June, a divided conference of US Roman Catholic bishops voted to draft a statement on communion that some bishops say should specifically admonish Catholic politicians, including Biden.

The bishops, who went ahead despite a Vatican warning that it would sow discord rather than unity, will take up the issue again next month.

Catholics hold two of the three top offices in the United States – the other is Speaker of the House Nancy Pelosi. But instead of uniting co-religionists, as the election of John F Kennedy as the first Catholic president did in 1960, both Biden and Pelosi have come under attack by Church conservatives.

They increased their criticism of Biden this month when his administration challenged the Texas law.

While Cardinal Wilton Gregory, the archbishop of Washington, DC, has not tried to stop Biden from receiving communion, the archbishop in Pelosi’s home city of San Francisco, Salvatore Cordileone, has told his priests not to give it to her.

White House spokesperson Jen Psaki said in a statement last week the meeting would cover “working together on efforts grounded in respect for fundamental human dignity”. This would include ending the COVID-19 pandemic, tackling the climate crisis, and caring for the poor, she said.

Like Biden, the pope has urged everyone to get vaccinated and has issued numerous appeals to defend the environment by reducing the use of fossil fuels. Biden will attend the UN Climate Change summit in Glasgow, COP26, and the pope is expected to send a message.

Many US bishops are climate change sceptics who supported former President Donald Trump, with whom Pope Francis had numerous disagreements. 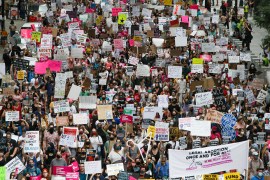 Tens of thousands of women march for abortion rights in US

American women fear more states could roll back abortion rights after Texas imposes a near-total ban on the procedure. 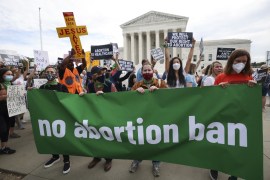 Women’s rights groups welcomed judge’s decision but warn it could be overturned by conservative-held Supreme Court. 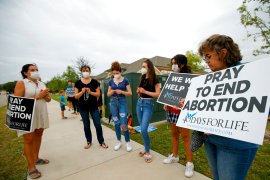 US prepares for Supreme Court showdown on abortion rights

US Supreme Court is poised to hear case challenging Roe v Wade, setting up a ‘critical’ moment on access to abortion.