Salvini, the leader of the right-wing Lega party who is known for an “Italians first” policy, is charged with kidnapping and abuse of office for using his position as interior minister to detain the 147 migrants at sea in August 2019.

On the opening day of the trial on Saturday in Palermo, prosecutors asked that they be allowed to question Salvini, who was present in court, on the stand.

The hearing, which came a month after the trial was first postponed, was largely procedural and lasted less than three hours before Judge Roberto Murgia set the next hearing for December 17.

If found guilty, Salvini who has built much of his political fortune on an anti-immigration campaign could face up to 15 years in prison.

He has said the decision was not his alone, but agreed by the government, including by the then-prime minister, Giuseppe Conte.

Judge Murgia said US actor Richard Gere would be allowed to take the stand as a witness, as requested by civil party Open Arms, the Spanish charity that operated the rescue vessel. The actor had boarded the ship in solidarity with the migrants before it docked at the Sicilian island of Lampedusa.

Salvini tweeted a photo of himself inside the courtroom, standing in front of one of the cells used for some defendants.

“This is the courtroom of the Palermo prison. The trial wanted by the left and by the fans of illegal immigration begins: how much will it cost the Italian citizens?” he tweeted.

Salvini has also ridiculed the actor’s presence at the trial. “You tell me how serious a trial is where Richard Gere will come from Hollywood to testify about my nastiness,” he told journalists outside the courtroom.

Al Jazeera’s Adam Raney, reporting from Rome, said Salvini has been known to question power and its legitimacy when confronted with serious issues. “He’s kind of joking about it and this gave him a platform to both say he respects the process by showing up in court, and at the same time ridicule it and say it’s a waste of tax payers’ money,” he said.

Ahead of the hearing, Open Arms’ founder and director Oscar Camps said the trial was not politically motivated. “Saving people isn’t a crime, but an obligation not only by captains but by the entire state,” Camps told journalists.

Tomorrow in Palermo 🇮🇹 former minister #Salvini will face trial for kidnapping people, for refusing to let the #OpenArms, with more than 150 rescued people on board, to deck in #Lampedusa during #Mission65 in August 2019. But he won't be alone in court… pic.twitter.com/S9lw2Yzpzr

In August 2019, the Open Arms vessel had rescued more than 150 people in distress in the Mediterranean Sea over the course of three interventions starting on August 1, according to information supplied by the aid organisation.

It was moored off the Italian island of Lampedusa from around mid-August but was not allowed to dock. The sanitary situation and tension on board came to a head as desperate people kept jumping into the water in an attempt to swim ashore.

In the end, the public prosecutor’s office arranged for the Open Arms to be impounded following an onboard inspection, which meant that it could dock with the remaining migrants.

Salvini repeatedly stressed that his actions had been in defence of Italy and in the government’s interest. The trial formally began on September 15 but was immediately postponed, as had been expected, to October 23.

The leader is also under investigation for another, similar standoff involving the Italian coastguard ship Gregoretti that Salvini refused to allow permission to dock in the summer of 2019. 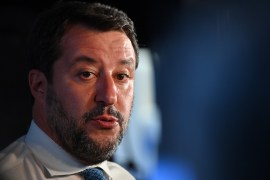 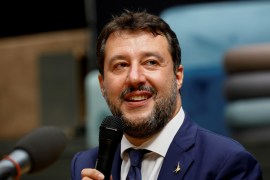 Rescue group hails decision to put far-right Italian politician on trial, which will begin in September. 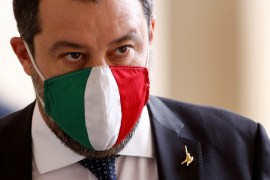