In 1965, Britain bought the Chagos islands for 3 million pounds – $4.1m at the present rate – from Mauritius to form the British Indian Ocean Territory (BIOT).

Mauritius sold off the 65-island archipelago so it could gain independence three years later, and has since claimed the islands as its territory.

But between 1967 and 1973, about 2,000 Indigenous Chagossians were displaced from their tropical paradise homes to Mauritius and Seychelles, making way for a US military base on one of the Chagos islands, Diego Garcia – a process undertaken in secrecy by the United Kingdom and the United States.

The UK has said it will cede the territory to Mauritius when it is no longer needed for defence purposes.

Those that were forced out were thrust into poverty, and have never been allowed to return.

Emmanuel Joseph Aglae, who earned a modest living in the cargo shipping industry, was among them. His daughter Marie Linda, after becoming a British overseas territories citizen, left Mauritius and settled in the UK in 2010.

In England, she worked hard as a hotel maid to pay for her children’s flight tickets so they could join her.

In 2012, they also arrived in England on six-month visas. Coralie, 25, and her teenage brother Jamel said goodbye to their grandfather Emmanuel, not knowing it would be the last time they saw him.

About 3,000 Chagossians and their descendants live in the UK, mostly in Crawley, a southeastern English town near Gatwick Airport.

Coralie enrolled at a college, studying travel and tourism – and aspired to become cabin crew.

But her dreams were halted when proof of her status was required.

Coralie was born in Mauritius and holds a Mauritian passport. Her mother cannot pass on her British nationality because, under UK law, children born outside the UK or a qualifying territory do not receive citizenship.

“Chagos islanders are unable to pass on their British overseas territory citizenship [BOTC] to their children as their children are not born there. But the reason for this is the government’s own doing, namely the population’s forced removal beginning in the 60s to clear the way for the US airbase, Diego Garcia,” Carl Soderbergh, director of policy and advocacy at Minority Rights Group International, told Al Jazeera.

“Through no fault of their own, the Chagossians are now stuck in a legal limbo, and it is high time that the British authorities address this and all the other shocking injustices they face.”

Soderbergh said Chagossians have faced “countless injustices” as the UK “keeps refusing to take responsibility for the consequences of their forced displacement”.

Coralie, a mother of two, said she is unable to open a bank account and is financially reliant on her partner and mother.

“It’s stressful,” she told Al Jazeera. “My kids are growing up and I can’t do anything for them. I can’t work.”

She has attempted to resolve the issue of her citizenship through lawyers, without success.

Coralie said the saga is affecting her mother, now 55.

“She’s getting old and it’s not easy for her to work hard all the time, doing overtime to save money for her kids.”

As she attempted to build a new life in the UK, Coralie’s father, Poonusamy Moopin, a security worker, died three years ago. She lost her grandfather this year. Both died in Mauritius.

Now she wishes to visit her elderly grandmother in Mauritius.

“I don’t have any energy because I lost my hero, my dad first. Then I lost my second hero, my grandad. I really wanted to go for their both funerals but I couldn’t,” said Coralie. “It is still hard to still believe they are gone. I always wanted to look out for my dad for his funeral. I really wanted to go to see him one last time, to kiss him one last time before he goes. I can’t. Even my grandad. I can’t.”

“Until now I don’t know what’s going to happen to us,” said Coralie.

Laura Jeffery, professor of anthropology of migration at the University of Edinburgh, said there are three limitations regarding eligibility for UK citizenship under the British Overseas Territories Act 2002.

“Discrimination against people born to unmarried parents, constraints relating to the date of departure from the Chagos Archipelago, and a restriction on the transmission of citizenship to third and subsequent generations born [outside] the Chagos Archipelago and to non-Chagossian spouses,” she said. 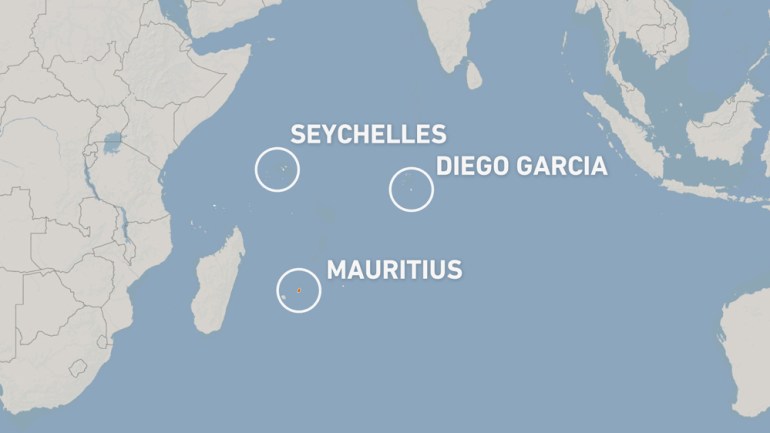 Henry Smith, the Conservative MP for Crawley, has said that he plans to introduce an amendment to the Nationality and Borders Bill at the report stage in November which, if successful, would offer a waiver to the cost of naturalisation, affecting about 1,000 Chagossian descendants.

“The reason for my bringing this amendment is that the community have faced various injustices since their forced exile half a century ago and were it not for the fact that they were forcibly removed from their homeland, subsequent generations would have the right to British Overseas Territory Citizenship which these days covers full-UK citizenship,” Smith told Al Jazeera by phone.

He explained that the amendment “seeks to correct that historical anomaly and to try to bring some justice to people who frankly have been very badly treated over the course of the last half a century”.

Coralie is hoping for a positive outcome.

“Then we can work and our dream is to make our mum stop working and us work for our mum, to take care of her.

“My grandad’s dream was to go back to his country. He was born there.”