The United Nations has suspended all flights to the regional capital of the Tigray region in northern Ethiopia after government air raids forced a humanitarian flight carrying 11 passengers to abort landing in Mekelle.

The flight safely returned to the Ethiopian capital, he said, adding that UN agencies were “carefully reviewing the circumstances” of what happened.

#Ethiopia: #UN confirms that UN humanitarian flight from Addis Ababa forced to turn back after airstrikes began in #Mekelle on Friday. "I can confirm that the government was informed of that flight," the head of @UNOCHA Southern & Eastern Africa, Gemma Connell, told journalists.

Ethiopian government spokesman Legesse Tulu told the AP authorities were aware the UN flight was in the area but said the UN and military flights had a “different time and direction”. It was not immediately clear how close the planes came to each other.

Getachew Reda, spokesperson for the Tigray People’s Liberation Front (TPLF), in a tweet said “our air defence units knew the UN plane was scheduled to land and it was due in large measure to their restraint it was not caught in a crossfire”. He suggested that Ethiopian authorities were “setting up the UN plane to be hit by our guns”.

to their restraint it was not caught in a crossfire. What begs the question however is the government cleared the UN plane to fly to #Mekelle only to send its fighter jet in time to raid civilian targets. While the use of the UN flight as a distraction couldn’t be ruled out, it

A military spokesman did not respond to questions.

It appeared to be a sharp escalation in intimidation tactics authorities have used against aid workers amid the intensifying, year-long Tigray war.

The friction between the government and humanitarian groups is occurring amid the world’s worst hunger crisis in a decade, with close to a half-million people in Tigray said to be facing famine-like conditions.

The government since June has imposed what the UN calls a “de facto humanitarian blockade” on the region of some six million people, and the AP has reported that people have begun to starve to death.

Ethiopia has now launched air raids on the Tigray region four days this week, as fighting has intensified between central government and regional forces.

Legesse, the government spokesperson, said Friday’s air raid targeted a base formerly belonging to the Ethiopian military and now being used by rebel Tigrayan forces as a training site in Mekelle.

Reda, TPLF spokesperson, told the Reuters news agency the attack had hit the compound of Mekelle University. He said he had no information on casualties.

Tigrai TV, which is controlled by the TPLF, reported that the attack hit the main campus of the university and 11 civilians were wounded.

Legesse, the government spokesperson, said the university was not hit.

Independent journalist Samuel Getachew told Al Jazeera from Ethiopia’s capital Addis Ababa that “there doesn’t seem to be any willingness to compromise”.

“The Ethiopian side keeps saying they are targeting a terrorist organisation that they’ve declared earlier this year. The TPLF is saying the Ethiopian government is creating some kind of genocide. There doesn’t seem to be an end in sight,” Getachew said.

“As of Monday, media noted that three people have been killed as a result of the air strikes.”

‘The whole city is panicking’

Meanwhile, fighting has escalated in Amhara, a neighbouring region where the TPLF has seized territory that the government and allied armed Amhara armed groups are trying to recover.

Residents in Dessie, a major city in Amhara, told Reuters people were fleeing, a day after a TPLF spokesperson said its forces were within artillery range of the town.

“The whole city is panicking,” a resident said, adding that people who could were leaving. He said he could hear the sound of heavy gunfire on Thursday night and into the morning, and that the bus fare to the capital Addis Ababa, about 385km (240 miles) to the south, had increased more than six-fold.

There are now more than 500,000 internally displaced people in the Amhara region, Atalel Abuhay the director of communications for the National Disaster Risk Management Commission told Reuters.

Seid Assefa, a local official working at a coordination centre for displaced people in Dessie, said 250 people had fled there this week from fighting in the Girana area to the north.

“We now have a total of 900 [displaced people] here and we finished our food stocks three days ago.”

Leul Mesfin, medical director of Dessie Hospital, told Reuters two girls and an adult had died this week at his facility of wounds from artillery fire in the town of Wuchale, which both the government and the TPLF have described as the scene of heavy fighting during the past week.

War erupted nearly a year ago between federal troops and the TPLF, which governed Ethiopia for three decades at the helm of a multi-ethnic coalition and now controls the northern region.

Thousands of people have been killed and more than two million have been forced to flee.

Tigray remains under a communications blackout, making it difficult to verify claims, while areas of fighting in Amhara are largely unreachable, as well. 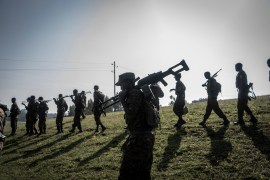 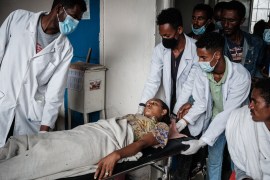 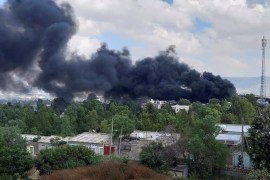 Air raids hit Tigray for the second time this week amid sharp escalation in near yearlong conflict. 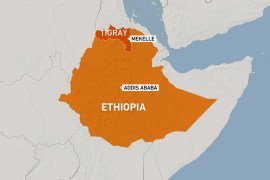 Gov’t says attack aimed for facility in Mekelle used for military training, but TPLF says plane did not hit any targets.