Thousands of supporters of Sudan’s transitional government have taken to the streets of the capital, Khartoum, and in other cities, with rival pro-military protesters also holding a sit-in outside the presidential palace.

Both sides appealed to their supporters to refrain from violence on Thursday, but nearly 40 people were injured or had breathing difficulties after security forces sought to break up protests using “force, bullets, and tear gas”, the Central Committee of Sudan Doctors said.

The competing rallies were organised by opposing factions of the Forces for Freedom and Change (FFC) civilian umbrella coalition, which spearheaded mass demonstrations in 2019 that led to the removal of longtime President Omar al-Bashir.

Under a fragile power-sharing deal between the military and the FFC, the country is currently being governed by a Sovereign Council of military and civilian leaders that oversees the transition until elections slated for 2023, as well as a civilian cabinet led by Prime Minister Abdalla Hamdok.

The FFC’s mainstream faction has supported Hamdok’s government, while a breakaway, pro-military grouping has demanded the dissolution of his interim cabinet.

Demonstrators joined marches organised by the mainstream faction in several cities across Sudan including Khartoum and its twin city Omdurman, Port Sudan in the east, and Atbara to the north.

The Central Committee of Sudanese Doctors said 37 people were injured in the protests, which it blamed on government forces, including four gunshot victims.

State television said police used tear gas and live bullets to break up protests in front of the parliament building in Omdurman.

In a statement, police said rogue protesters in Omdurman set a police vehicle on fire and attacked police officers, shooting two. Officers then used a “legal amount” of riot control to disperse the crowd, it said. Witnesses said protesters were tear gassed heavily.

Al Jazeera’s Hiba Morgan, reporting from Khartoum, said there had been significant concerns that violence could break out and that “district attorneys had been assigned to follow the procession around the various parts of the capital”.

“Also, hospitals have already been named in case people get injured in the protests,” she added.

“Protesters want the FFC to pressure the military to continue with the revolution which started in December 2018 and to form a legislative council that will ensure that the agreement signed in 2019 between the military and civilians will be implemented,” said Morgan.

She added that the protesters were eager to show their support for the FFC and for them to push forward with the formation of a civilian government.

Meanwhile, protesters from the splinter FFC faction, the National Charter Alliance, have been holding a sit-in outside Khartoum’s presidential palace for the past five days, with soldiers around the site providing protection.

Some of these demonstrators have urged General Abdel Fattah al-Burhan – who chairs the Sovereign Council – to take over, blaming Hamdok’s government for the deterioration of economic conditions and rising poverty.

“I was in the revolution, I was supposed to be represented in this government but I don’t see anything that represents me. A few parties took over the revolution and stole it,” Zahra Issa, a protester at the sit-in, told Al Jazeera.

“We want the military to dissolve this civilian government. Let them remove the prime minister and all the committees that have been formed.”

Another protester, Aljailani Hamid, said “the country is destroyed”.

“People are hungry, students can’t learn, those in the hospital can’t get treatment. We demand the government leave and free and fair elections be held. Let the military dissolve the government and take over,” he said.

Critics, however, allege the protests at the palace are being driven by members of the military and security forces, and involve counter-revolutionary al-Bashir sympathisers.

“The sit-in does not represent the revolution, does not look like anything that we were in the revolution,” Hajooj Kuka, member of Girifna, a non-violent resistance movement, and an award-winning filmmaker, told Al Jazeera.

“When the youth go to the sit-in, they are not welcome there, because it’s a sit-in that it’s very obvious that is orchestrated by some rebel groups and national security officers,” he said, adding that the goal of Thursday’s pro-civilian march was not to stop the formation of a more representative government but “to stop the military from taking power”.

“I support a civilian government because the people of Sudan should get to decide their future,” Rayan Adil, a Khartoum resident, told Al Jazeera. “We don’t want a military government that is dictatorship. It’s unfortunate, so many lives were lost in the revolution for Sudan to have a civilian leadership and some seem to have forgotten that,” she said.

The rising tensions came as Sudan reeled from deep political splits, with military leaders demanding a cabinet overhaul and civilian figures accusing the army of planning to seize power.

Sudan said in September it had thwarted a coup attempt that it blamed on military officers and civilians linked to al-Bashir’s regime.

Last week, Hamdok described the crisis as “the worst and most dangerous” the country has faced during the post-Bashir transition.

Ali Ammar, a protest leader from the mainstream FFC faction, urged Sudanese “to fill the streets [on Thursday] across the country to safeguard the civilian rule and democratic transition”.

“Our protest will not come near the presidential palace or the cabinet building, so there would be no friction with protesters [there],” he told a news conference on Wednesday.

Nasr al-din Mohammed, another leader from the mainstream faction, urged for the protest, which coincides with the anniversary of Sudan’s first revolution in 1964, to be “peaceful”.

“October 21 is a day of tolerance, not of incitement or violence,” he told a separate news conference.

Finance Minister and ex-rebel leader Gibril Ibrahim, also associated with the breakaway faction, “rejected resorting to any form of violence” during the pro-army protests. 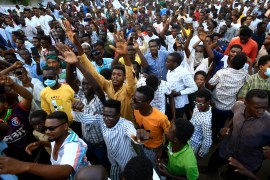 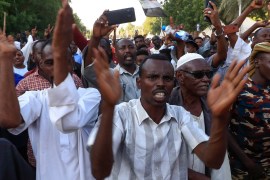 Protesters in Sudan are demanding the resignation of the interim government. 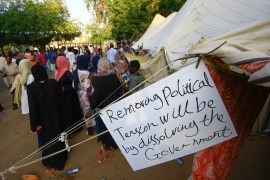 Protests have been staged since Saturday amid a deepening rift between military and civil rule backers.