Nikolas Cruz, a former student, has pleaded guilty to murder in the 2018 high school massacre in Parkland, Florida in the southern US, that left 17 dead.

Cruz, 23, entered his pleas in a courtroom hearing on Wednesday attended by a dozen relatives of victims after answering a long list of questions from Florida Circuit Judge Elizabeth Scherer aimed at confirming his mental competency.

He was charged with 17 counts of murder and 17 counts of attempted first-degree murder for those wounded in the February 14, 2018, attack at Marjory Stoneman Douglas High School in Parkland, one of the deadliest school shootings in United States history.

The incident has become a landmark in the continuing political fight in the US over gun control. Survivors formed “March for Our Lives”, a gun safety advocacy for stronger background checks and a ban on the AR-15 type of assault-style rifle that Cruz used in the assault.

In court on Wednesday, several parents shook their heads as Cruz apologised, saying, “I’m very sorry for what I did … I can’t live with myself sometimes.” He said he wished it was up to the survivors to determine whether he lived or died.

Several parents and other relatives of victims broke down in tears while listening to the court proceedings via a video conference.

Cruz, who was 19 at the time of the attack, now faces a potential capital punishment, or life in prison to be determined in an upcoming penalty trial.

Cruz killed the 14 students and three staff members on Valentine’s Day in 2018 during a seven-minute rampage with an AR-15 semiautomatic rifle through the classrooms and hallways of a three-storey school building.

Cruz had been expelled from Stoneman Douglas a year earlier after a history of threatening and violent behaviour that dated back to preschool.

Fred Guttenberg, whose 14-year-old daughter Jaime died in the shooting, said he visited her grave this week to ask her for the strength to get through Wednesday’s hearing.

“She was the toughest, wisest person I ever knew,” Guttenberg said. “My daughter always fought for what was right. My daughter despised bullies and would put herself in the middle of someone being bullied to make it stop.”

Whether Cruz should receive the death penalty or life in prison will be determined in a penalty trial by jury. Cruz’s chief prosecutor, Broward State Attorney Mike Satz has said Cruz deserves the death sentence.

Cruz’s defence lawyers had previously offered a guilty plea in exchange for a life sentence, but that was rejected by state authorities. The defence is expected to argue during the penalty trial that Cruz now has taken responsibility for his actions.

Given the case’s notoriety, Judge Scherer plans to screen thousands of prospective jurors. Hearings are scheduled throughout November and December, with a goal to start testimony in January.

Families of the shooting victims agreed to a $25m settlement with the Broward County school district, the South Florida Sun Sentinel newspaper reported on October 18.

The agreement resolves 52 of 53 lawsuits filed by families against the district for negligence in the wake of the shooting, David Brill, a lawyer for the families, told the Sun Sentinel.

Anthony Borges, a former student who was shot several times, will continue to pursue his own lawsuit, the newspaper reported.

Students around the US marked the anniversary of the school shooting in Parkland with moments of silence. 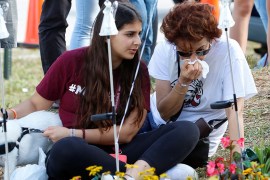 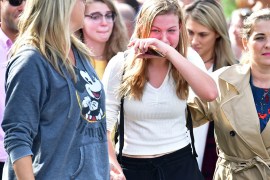 How are young people leading the charge for US gun reform?

We examine how activism is changing the conversation on weapons safety in the wake of the Parkland school killings. 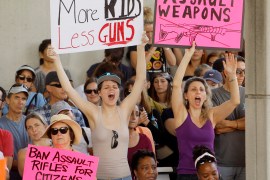 Florida teachers can arm themselves under new gun bill

Critics question if the solution to gun violence is the presence of more guns, warn of the danger of teachers misfiring. 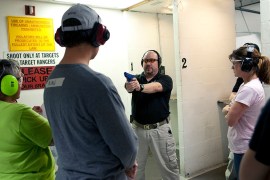