The ruling Georgian Dream party has taken the lead in a closely watched municipal elections in Georgia held a day after former president and opposition leader Mikheil Saakashvili was arrested upon his return from exile.

According to Russian news agencies citing an exit poll ordered by Imedi TV station on Saturday, the governing party obtained 47.6 percent of votes. The result could avoid a snap parliamentary vote and a political standoff between the governing party and the opposition.

However, it was too early to call the election results as exit polls have been giving conflicting tallies, Forestier-Walker said.

In comments to the AFP news agency through a representative who visited him in prison, Saakashvili said, “Georgia needs a peaceful transition towards a genuine democracy where political opponents are not locked up on falsified charges or forced into exile.”

“I am not seeking any political office, I am just determined to fight to the end against the oligarchic rule which kills Georgian democracy,” he said.

Saakashvili, 53, said on Friday he had returned from Ukraine, where he heads a Ukrainian government agency steering reforms.

The flamboyant pro-Western reformer was arrested shortly afterwards over a 2018 conviction in absentia on abuse of office charges. He denies wrongdoing and had denounced his sentence to six years in jail as politically motivated.

My letter from prison
My dear associates and my Georgian community.

When I left Kyiv and came here, I knew that I would most likely be arrested, with fabricated, false verdicts which were issued by order of Putin. No country in the world except Russia recognizes this sentence… pic.twitter.com/ffA8VPvhz6

In a Twitter post on Saturday accompanied by a picture of a letter to supporters from prison, Saakashvili said: “I want to ask you all to go to the elections so that not a single vote is lost.”

He added: “My freedom and, more importantly, the freedom of Georgia depends entirely on your actions and fighting ability.”

Prior to his arrest, he had posted on Facebook a video message calling on supporters to take to the streets against the government.

Founded by powerful billionaire Bidzina Ivanishvili, Georgian Dream has been the governing party since 2012.

Critics have accused it of using criminal prosecutions to punish political opponents and journalists.

Interpol turned down requests from Tbilisi to issue a red notice against Saakashvili. 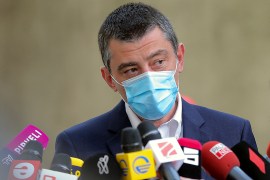 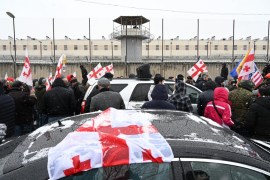 Hundreds protest in Rustavi, expressing solidarity with opposition leader Melia a day after his arrest. 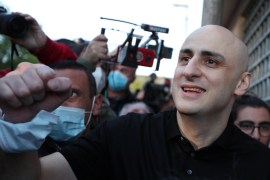 Nika Melia’s release is seen as a significant step in an EU-backed plan to help end a prolonged political crisis.