Panama’s police force has issued an apology for taking part in an Israeli-run training course after images showed officers shooting at targets that appeared to depict people dressed in traditional Arab clothing.

The controversy arose after photos emerged from the training, one of which showed a man pointing a gun at an image of an armed person wearing what appeared to be a traditional headdress.

The images were published on Twitter by the National Police and the local Israeli chamber of commerce but were later deleted.

“We are respectful of cultural, religious and ethnic differences,” the police force said in a statement on Friday. “We regret that … a situation arose outside the nature of our mission and duty.”

The deleted Twitter posts had said the training was organised by the Israeli embassy in Panama.

The Palestinian Information Office in Panama also condemned the training.

“The target shooting training codes of conduct only accept silhouettes without images … [this] is an act of discrimination and racism that Panama should not tolerate,” the office said in a statement, local media reported.

Translation: We regret that during an act in which we participated as guests as an institution, a situation outside the nature of our mission and duty as the first security institution arose.

The controversy drew a rebuke from the Panamanian Committee of Solidarity with Palestine, which said the course promoted “violence and racism so that anyone who wears a hijab or something similar can be classified as a terrorist”.

The committee also requested the government to cancel the “intervention” of foreign countries in the training of security forces.

“This training constitutes a violation of the protocols referring to the shooting courses that prohibit the use of distinctive figures of the Arab peoples as objects of hatred and persecution,” the statement said.

“We call on the national government to cancel the intervention of Israel and other countries … in our security forces,” it added.

Translation: What a shame [the police forces] are trained by the Israeli embassy to target shooting using the image of a person with a Kufiya

Translation: What does the Panamanian Police gain by putting a photo of a Palestinian woman as a symbol of terrorism? 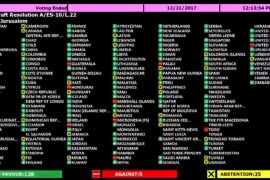 A country breakdown of the General Assembly vote rejecting US decision to recognise Jerusalem as Israel’s capital. 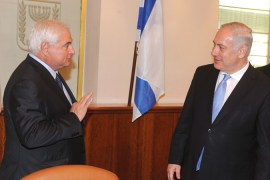 Panama and Israel: A special relationship

Martinelli’s efforts to intertwine his economy with Israel shows Panama will continue to “bank on Palestine denial”.

Panama has deported three of the six Israelis arrested for displaying fake pistols during a Copa Airlines flight from Peru to Columbia.