Beirut, Lebanon – Ongoing water shortages in northeastern Syria are compounding an already devastating humanitarian crisis for tens of thousands of people, according to aid organisations.

“Children’s lives in Iraq and North East Syria are hanging in the balance as drought, low levels of water in key rivers, and lack of access to maintain damaged water station infrastructure have put water out of reach for millions,” Save the Children said in a statement on Tuesday.

The aid group said that since April 2021 there have been more than 56,000 recorded cases of acute diarrhoea in northeast Syria and more than 17,000 cases of leishmaniasis, a parasitic disease.

“While these diseases are more common in Syria’s hot summer months, the outbreaks in 2021 have been much higher because clean water for drinking and washing has been so limited,” Save the Children said.

Mercy Corps Syria told Al Jazeera that it had recorded similar numbers of the diseases compiled by Save the Children since April.

“The water scarcity adds another layer to the people’s suffering in the region,” Mohammad* from Mercy Corps’ Syria Office told Al Jazeera. “It’s making life harder for families to survive.”

Jihane*, a 37-year-old who lives with her husband and three children in Al Hol refugee camp, told Save the Children that her six-year-old daughter Zaina* fell ill, and her doctor said it was due to the quality of drinking water.

“When I took her to the hospital, there were more than 10 to 12 cases suffering from the same symptoms,” she told the organisation. “There was a boy there whose situation was critical.”

Jihane and her family have been displaced due to the devastating conflict for half a decade, but said she does not have enough water to bathe her children and wash the dishes.

Kurdish-led authorities and some Syrian civil society organisations have accused Turkish-backed forces of intermittently cutting off the water supply from Alouk water station after taking control of it in late 2019 as part of a military operation in northern Syria.

In 2020, Human Rights Watch criticised Turkish authorities for supply cuts it said have hampered the ability of humanitarian agencies to help hundreds of thousands of people respond to the COVID-19 pandemic.

Turkey has denied deliberately cutting the supply and has said outages were due to technical issues, such as maintenance issues and a lack of electricity from a dam not under Turkish control.

According to Save the Children, the Alouk station has rarely pumped water at full capacity in 2021. It did not pump any water for 89 days, and pumped below half its capacity for 142 days.

Other water pumping stations in the northeast are struggling with low water levels in the Euphrates River due to lack of rain, as well as lack of frequent maintenance due to the conflict.

“There are 91 pumping stations impacted due to water levels, and 24 of them are severely affected or shut down completely,” Mohammad from Mercy Corps Syria told Al Jazeera.

“And there are at least 90 communities and over 50 IDP (internally displaced persons) settlements that rely on these water stations that are pumping below their capacity.”

Due to the continuing conflict, it has been difficult to access many of these pumping stations to properly maintain them.

Meanwhile, many families that had sustained themselves through farming now face a food security crisis. Yousef*, who lives in a village near the city of Hasakeh with his eight children, said he can no longer support himself through farming, and has less access to drinking water.

“Before, at least we had what we needed: wheat for baking bread for our children,” he told Save the Children. “Now, we cannot water our lands anymore, there is no rainfall.”

It has also made coping with COVID-19 much more difficult. Cases have soared recently in northeastern Syria, while the region is also struggling to secure enough testing kits and oxygen tanks.

“Having sufficient access to water is critical in order for us to curb the virus, through hand washing and other hygienic measures,” Mohammad said.

Families have tried to cope with the crisis through buying privately supplied water from trucks. Mercy Corps Syria said that due to the decline of the Syrian pound and increasing diesel prices, it has become unaffordable for most. “It costs almost 40 percent of their income,” Mohammad said.

Humanitarian agencies have tried to secure water for families, support farmers with more water-efficient practices, and help maintain water stations. However, they have called on increased funding to help cope with the water crisis affecting millions, and urged the international community to focus on water scarcity in climate change policy.

Syria’s war, which started in 2011 with a brutal crackdown on anti-government protests, has killed about 500,000 people during the past 10 years. It later turned into a complex battlefield involving foreign armies, local militias, and foreign fighters.

According to the United Nations, more than 13 million Syrians across the country are in need of humanitarian assistance, and almost 90 percent live below the poverty line. 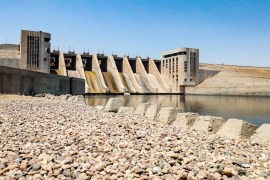 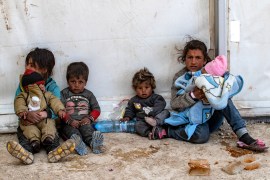 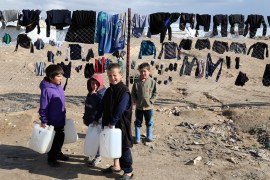