Mali’s government says that it has asked the country’s main Islamic body to open peace talks with leaders of al-Qaeda’s local affiliate in an effort to end a decade of conflict.

The latest announcement on Tuesday by the religious affairs ministry marks by far the most concrete step towards negotiations with group leaders, though it is not clear when talks would begin.

Malian authorities have previously endorsed the idea of talks and have quietly backed local peace initiatives with the fighters as security deteriorates and armed groups expand beyond their traditional strongholds.

Such an approach is vigorously opposed by Mali’s chief military ally France, whose president, Emmanuel Macron, said in June that French troops would not conduct joint operations with countries that negotiate with such groups.

“The minister met the High Islamic Council last week to inform them of the government’s desire to negotiate with all the radical Malian groups, [including] Iyad Ag Ghali and Amadou Koufa,” Camara said.

Mohamed Kimbiri, a senior HCI official, confirmed the body had been tasked with negotiating with Malian JNIM leaders but was instructed not to negotiate with foreign groups.

He told The Associated Press on Tuesday that he was asked by the government last week to launch discussions and said they are working with their representatives in the country’s north.

“The only directive we have received is to negotiate only with the Malians,” Kimbiri said. “The other [fighters] we consider invaders.”

He also said the subject of Islamic law is not “taboo. Everything is negotiable.”

Another HCI official said no talks had yet taken place.

The HCI mediated talks in central Mali’s Niono Circle area – quietly backed by national authorities – that led to a peace deal in March between JNIM fighters and traditional hunters that oppose them.

But the deal broke down in July and violence in the area has since surged.

The government’s actions came while relations between Mali and France, which first intervened against the fighters in 2013, were at a low point.

Earlier on Tuesday, the French army said its troops shot dead a woman while conducting a reconnaissance operation with Malian soldiers in the country against armed groups, prompting an investigation.

The woman died on Monday during a joint patrol “in an area where elements of an armed terrorist group has been detected east of Gossi” in the north, the French general staff said.

An investigation has been opened “to clarify the exact sequence of events and to shed full light on this combat action”, a statement said.

Macron announced in June that France would begin drawing down its 5,000-troop mission in the Sahel, leading Mali to accuse France of abandoning it and float the idea of using Russian mercenaries. 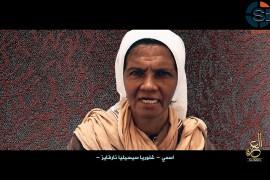 Colombian nun released in Mali after four years in captivity

Abductions by al-Qaeda and ISIL-affiliated groups have been frequent as Mali struggles to contain violence. 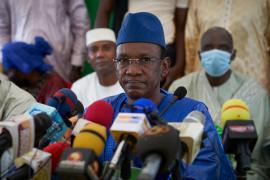 Mali accuses France of training ‘terrorists’ in the country 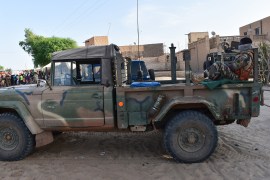 At least 16 soldiers killed and 10 more wounded near the village of Bodio, Mopti region, according to officials.