The European Union’s top official has slammed a ruling by Poland’s constitutional court, saying it challenges the supremacy of the bloc’s laws and will not be left unanswered.

Addressing EU politicians in Strasbourg on Tuesday, European Commission President Ursula von der Leyen said the ruling by Poland’s Constitutional Tribunal earlier this month was “a direct challenge to the unity of the European legal order” and undermines the protection of judicial independence.

“The rule of law is the glue that binds our union together,” Von der Leyen said.

Relations between Warsaw and Brussels plunged after the tribunal ruled on October 7 that Polish laws take precedence over those of the 27-nation bloc – which Poland joined in 2004 – escalating lingering tensions over democratic standards between the country’s right-wing nationalist government and Brussels.

The split came to a head at Tuesday’s plenary of the European Parliament, where Polish Prime Minister Mateusz Morawiecki defended his country’s stance.

But Morawiecki insisted that Poland abides by EU treaties and dismissed concerns raised by opponents of Poland’s government, who fear that the court’s ruling has put the country on a path to a possible “Polexit,” or an exit from the 27-nation EU.

“We should not be spreading further lies about Poland leaving the EU,” he said.

‘The commission will act’

The European Commission has several options to try to make Warsaw comply with EU law, notably by continuing to hold up Poland’s access to billions of euros of funding to help revive its pandemic-hit economy. The commission could also launch a so-called infringement procedure against Poland, meaning legal action.

“We cannot and we will not allow our common values to be put at risk. The commission will act,” Von der Leyen said, adding she was open to dialogue with Warsaw over the situation.

“This is a situation that can and must be resolved. And we want a strong Poland in a united Europe,” she said.

At the heart of the dispute is whether the EU or each individual nation should have the most power over their citizens.

The Constitutional Tribunal ruling came after Morawiecki asked whether EU institutions could stop Poland from reorganising its judiciary.

The European Court of Justice ruled in March that Poland’s new regulations for appointing Supreme Court justices could violate EU law and ordered Warsaw to suspend them.

In his speech on Tuesday, Morawiecki said Poland was being intimidated and attacked by the EU, whose top court issues rulings that aim to take power away from member states.

“We are now seeing a creeping revolution taking place by way of verdicts of the European Court of Justice,” he said. 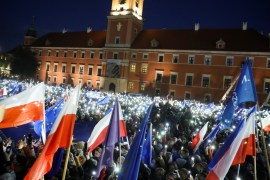 Could Poland leave the European Union?

Thousands rally in Warsaw after controversial ruling by Poland’s top court that parts of EU law are unconstitutional. 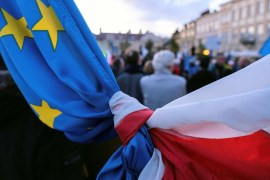 Demonstrations in more than 100 towns and cities across Poland on Sunday as Brussels-Warsaw tensions simmer. 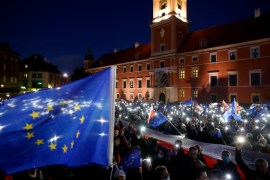 Poles rally to defend the EU membership amid fear of ‘Polexit’