The attacks, which include beatings of farmers and destruction of trees, preceded the formal start of the olive harvest season on October 12 in the occupied West Bank, but intensified in number over the past week.

The most targeted areas have been in the northern occupied West Bank, around villages south of Nablus city and Salfit, according to locals observers.

Ghassan Daghlas, who monitors settler violence in the northern West Bank, told Al Jazeera they recorded 58 attacks since the start of the season, including nine on the village of Burin south of Nablus alone.

“It is evident that there is an increase in the attacks. We are 30 percent into the olive harvest season, and we have already had 58 attacks in the north [of the West Bank],” said Daghlas, describing the attacks as “planned and not spontaneous”.

Harvesting olive trees is a key economic, familial and social activity for many Palestinians, who take days off work to tend to their lands, or those of their relatives, neighbours or friends. Between 80,000 to 100,000 families rely on olives and olive oil as primary or secondary sources of income.

While settler attacks are a frequent, near-daily reality for Palestinian villages, the number and intensity of attacks increase during the olive harvest season which runs until November, as settlers target families working on their lands.

On October 12, settlers uprooted 900 olive and apricot saplings, and stole olive crops in the village of Sebastia, north of Nablus. A further 70 olive trees were destroyed in Masafer Yatta, south of Hebron.

In Awarta, east of Nablus, settlers chopped down dozens of olive trees on October 13 and sprayed them with chemicals. They also destroyed some 70 olive, fruit and vegetable trees in al-Tuwani south of Hebron, and slashed tyres, and vandalised cars and walls in the village of Marda near Salfit.

On October 14, settlers cut down more than 80 olive trees in the village of al-Mughayyer, north of Ramallah.

The next day, they attacked the Hammoudeh family in the village of Yasuf near Salfit with rocks, injuring four. The family and other residents were attacked again on October 16. Settlers also beat residents of Burin near Nablus that day with batons, and set olive groves ablaze, injuring at least 12 Palestinians.

Daghlas said while in previous years “the attacks would begin a week after the start of the olive harvest”, this year, “the attacks began early”, which forced Palestinians to tend to their trees quicker than expected. 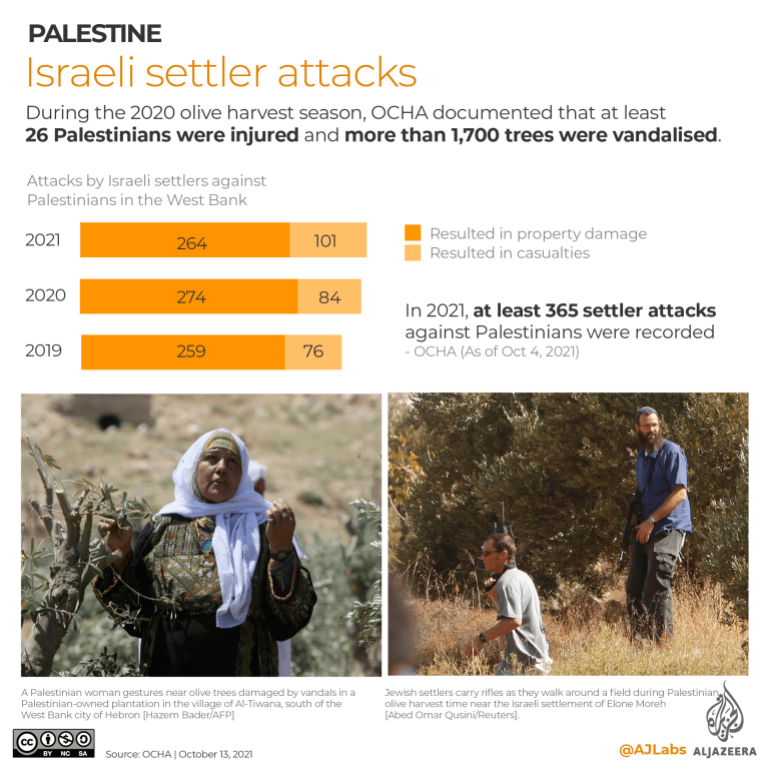 Daghlas pointed out that in addition to the burning and cutting down of trees, the attacks included stealing olive crops, chasing down farmers and pushing them off their lands, as well as threatening them and drowning parts of their lands with the sewage water.

“The settlers, and the army, are chasing us down over our livelihoods, our income, our bread, our sustenance,” said Daghlas.

Palestinians say Israeli settlers very often come with army protection and are many times armed, which rights groups have documented. At times, the settlers and the army work together.

The strategic building of settlements on hilltops in the West Bank makes it easy for settlers to descend onto the Palestinian villages and their lands below. Additionally, settlers enjoy what the United Nations has called “institutional and systematic impunity”, which allows them to continue committing attacks.

The UN described the attacks as being “ideologically motivated and primarily designed to take over land but also to intimidate and terrorize Palestinians”.

According to the latest update by the UN Office for the Coordination of Humanitarian Affairs (UN OCHA), settlers carried out 20 attacks between September 21 and October 4 – a noticeable increase with the start of the olive harvest.

Between September 7 and 20, there were 11 attacks, while six were recorded between August 24 and September 6.

The largest recent attack came on September 28. A large group of masked settlers descended on to the south Hebron village of al-Mufagara and attacked residents with stones, injuring 29 Palestinians including a three-year-old boy who suffered fractures to his skull and was hospitalised.

In a statement on October 12, the International Committee of the Red Cross (ICRC) said its data showed that over the period of one year, between August 2021 and 2021, more than 9,300 trees were destroyed in the West Bank, and called for the protection of Palestinian farmers.

The ICRC also said it has “observed a seasonal peak in violence by Israeli settlers residing in certain settlements and outposts in the West Bank towards Palestinian farmers and their property in the period leading up to the olive harvest season, as well as during the harvest season itself”.

“Farmers also experience acts of harassment and violence that aim at preventing a successful harvest, not to mention the destruction of farming equipment, or the uprooting and burning of olive trees,” said Els Debuf, head of the ICRC’s mission in Jerusalem.

Mohammad al-Khatib is an activist and founder of Faz’a, a volunteer coalition formed last year to protect and aid Palestinian farmers, and which now brings together at least 500 volunteers.

The coalition, along with other campaigns, attempts to protect Palestinians working on their fields by bringing groups of volunteers to help out and be present on the land, in hope of deterring the settlers.

Khatib was assaulted and arrested in previous days during his presence in villages around Nablus and Salfit.

“We are not an army or security cells. We work in difficult security conditions where you cannot use any means of protection,” Khatib told Al Jazeera.

“For example, we are not allowed to use pepper spray, or any kind of tool, for self-defence, while the settlers attack us with weapons, under army protection, with knives, sticks, pepper spray, and they hurl rocks at us,” continued Khatib.

He described the settlers as “terrorists supported by the state and the army” with the “aim of preventing Palestinians from remaining on their lands and eventually displacing them”.

Nafez Hammoudeh and his family from the village of Yasuf near Salfit were attacked two days in a row and prevented from harvesting their olives.

He told Al Jazeera on Friday, settlers beat his relative with rocks on her head and sprayed her in the face with pepper spray. They also attacked her son and her husband, and stole sacks full of olives, as well as the ladder, and mobile phones.

On Saturday, the army came along with settlers, and assaulted them while trying to remove them off their lands.

“We were barely there for an hour on both days before we were kicked out,” said Hammoudeh. “They did not give us any reason – we told them we are the owners of the land, but to no avail. It’s just a show of force.”

Daghlas attributed the rise in settler attacks to the ongoing expansion of Israel’s illegal settlements in the West Bank and encroachment onto Palestinian villages.

He said for example, in the past, the settlement of Yitzhar south of Nablus, was facing the village of Burin. Now, the settlement has expanded over to the nearby villages of Madama, Urif, Einabus and Huwara.

Similarly, the settlement of Itamar once stood opposite to the village of Awarta south of Nablus, while now it has extended to Beit Furik and Aqraba, he said.

“In the past, we would focus on the villages near the settlements, but now the entire West Bank is near settlements,” said Daghlas, explaining “the more the settlements grow, the more land comes under threat”.

He said while he sees a “persistence” by the Palestinian people “to confront [the army and settlers] and remain on their lands”, the settler attacks are “a form of pressure”.

“The settlers are only growing in numbers, and this terrorism is only growing. The people will explode one day, and the world will bear responsibility,” said Daghlas.

“If the Palestinian people lose hope, they will rise up, and there is not one power in the world that will be able to deter them.”