Authorities in English-speaking western Cameroon have appealed for calm after the killing of a five-year-old girl by a policeman in the troubled region and his subsequent lynching by an angry crowd.

The incident took place on Thursday in Buea, the capital of the Southwest region where anglophone separatists and government forces in the French speaking-majority nation have been locked in a bitter four-year-old conflict.

“We urge the public to be calm. This is a sad and unfortunate incident,” Governor Bernard Okalia Bilai told the state television channel CRTV.

“Rest assured that those who did it will pay. It is an atrocity,” he said.

Blaise Chamango, head of a local campaign group called Human Is Right, said a woman driving children to school was ordered by police to stop at a checkpoint.

“The driver didn’t obey. A gendarme opened fire and a schoolgirl was fatally wounded,” she said.

“People responded by lynching the gendarme. More than 500 people came out and marched with the body [of the girl] to the governor’s office.”

The defence ministry statement confirmed the events, saying in a statement: “In an inappropriate reaction, unsuited to the circumstances and clearly disproportionate to the irreverent behaviour of the driver, one of the gendarmes … fired warning shots in order to immobilise the vehicle.

“In the process, the little Caro Louise Ndialle, a young pupil aged about 5, who was on board the said vehicle, was fatally shot in the head,” it added.

An investigation has been opened into the death of the girl and the lynching of the policeman, the ministry said.

Later on Thursday, hundreds of residents took to the streets of Buea, some holding tree branches in a sign of peace.

Others waved 500 franc CFA currency notes ($0.88), which they said was how much the girl’s parents refused to pay before the gendarme opened fire.

Several said the incident was part of a pattern of heavily militarised security forces harassing residents.

The Southwest and neighbouring Northwest regions are home to English speakers who comprise about a fifth of Cameroon’s 22 million people. 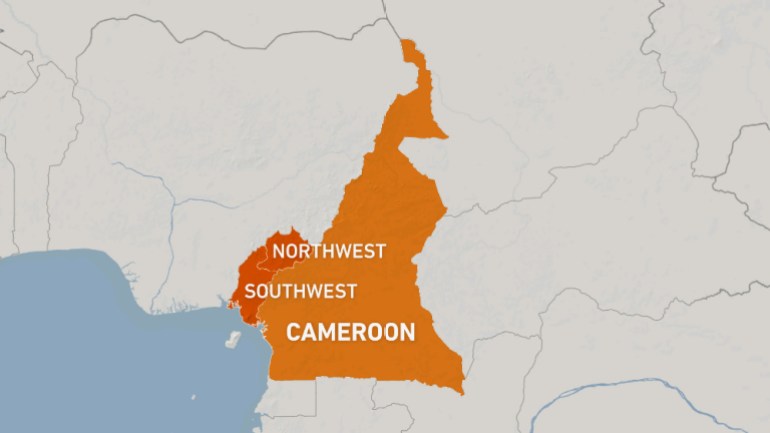 A decades-long campaign by separatists to redress perceived discrimination at the hands of the francophone majority flared into a declaration of independence on October 1, 2017.

Attacks on the security forces by armed separatists were met with a crackdown, sending the two regions into a spiral of violence that has killed more than 3,500 people and forced about 700,000 people to flee their homes.

Last month alone, 15 soldiers were killed in two attacks in five days, while four suspected separatists were sentenced to death over the 2020 killing of seven schoolchildren.

The presence of the anglophone regions derives from the colonial era.

The former German possession of Cameroon was partitioned after World War I between Britain and France.

In 1961, part of the British territory, the Southern Cameroons, joined Cameroon after it gained independence from France.

Anglophones have long chafed about perceived inequality, especially in education and law.