Melbourne, Australia – When the world’s longest lockdown began in her hometown in March 2020, Shemsiya Waritu knew she was in for a challenge.

With her husband overseas, she would need to manage the burden not only of work and daily home duties for four children but homeschooling too.

An Oromo woman from Ethiopia with little schooling herself and few formal English literacy skills, she told Al Jazeera she was “actually nervous”.

Shemsiya, who has lived in Melbourne since 1995, told Al Jazeera she reflected on her roots in a large family with busy, hard-working parents, in which it is each child’s responsibility to look after the sibling younger than them.

“So then I just said to myself, ‘How did we survive as an African?’ ‘What sort of help did we get when we had to do our homework?’ I’m going to make sure each of them help each other.”

She encouraged each of her Australian-born children to help the next youngest with their schooling and homework.

While Shemsiya acknowledges that she was fortunate to receive assistance from the school, she also said that the experience of homeschooling without adequate literacy and computer skills was one shared by many in the African Australian community.

“When I had that panic I thought of so many families – especially new arrivals – who don’t speak English to even say to the teachers’ yes I need help in these areas’,” she told Al Jazeera.

She adds that, while she is married and was fortunate to have the support of her husband once he returned, for many single mothers in the migrant community, the challenges were compounded.

“I can’t imagine what many families had to go through.”

Shemsiya is one of thousands of women in Melbourne, Australia’s second-biggest city, who have been under immense pressure through a series of six lockdowns which will have extended to a cumulative 267 days by the time it begins to lift on October 26.

The restrictions – some of the toughest in the world – have included protracted school closures, a 9pm curfew and a requirement that people stay within 5km (3 miles) of their home in the one hour a day during which they were allowed out for exercise.

All businesses have closed apart from grocery stores and other essential services, and care facilities such as childcare have also been shut down.

This has meant that all homeschooling and preschool childcare has had to take place in the confines of the home, within a strict and tightly controlled environment of social isolation.

Tanja Kovac, CEO of Gender Equity Victoria, told Al Jazeera that while the experience of lockdown affected all Victorians, “the impacts have been gendered across the board”.

She says that not only has there been enormous pressures on mothers but also on industries that employ a high ratio of women – with female-dominant businesses such as salons, childcare, hairdressers and beauty parlours forced to shut.

Conversely, male-dominated industries such as construction have primarily remained open, even when there has been evidence of high rates of COVID-19 transmission. A two-week closure and vaccine mandate imposed on builders last month led to violent protests.

The pressure on what Kovac describes as the “deeply feminised” essential service workforce of nurses, elderly care and educators has also been amplified during the pandemic.

“COVID-19 has exposed massive gender gaps within society,” Kovac said. “One of the biggest ways that it did that was it clearly demonstrated that a huge part of our essential service workforce is made up of women and that most of those roles are significantly underpaid.”

Kovac – whose organisation recently released a report documenting the experiences of migrant and refugee women – says the pressures on the women in those communities have been even greater.

“Many migrant and refugee women did not qualify for government subsidies because they were excluded for visa and other reasons from accessing that support,” Kovac told Al Jazeera. “Many of them were left behind and left in very perilous financial positions.”

There were also additional lockdown restrictions on public housing flats, with some complexes sealed off.

The singling out of certain residential areas, which are largely home to migrants and refugees, not only increased the pressure on those living there but was seized on by Australia’s right-wing politicians. Pauline Hanson, who leads the One Nation party, attacked the people living in the affected tower blocks as “alcoholics” and “drug addicts” who should have learned to speak English before coming to Australia.

The lockdowns were found by the Victorian Ombudsman to be a breach of human rights.

Debra Parkinson, manager of Gender and Disaster Australia, says that her studies into natural disasters – including Australian bushfires – reveal that the effect of such incidents on women is often more extreme than for men.

This includes an increase in domestic violence, in which the stresses of job loss, increased unemployment, poverty, and drug and alcohol abuse “have a flow-on effect to violence towards women.”

While violence against women has increased worldwide during the pandemic, Parkinson says Melbourne’s protracted lockdown meant that women were made more vulnerable by potentially being shut in the house with a perpetrator of violence.

“And those usual supports they might have had – like extended family or neighbours, or even formal supports – have been really affected by COVID,” she said.

But the experience of the pandemic – considered to be a natural disaster – presents an opportunity to learn and make changes in disaster responses for the future.

“We need to have more diverse voices there [including] women and LGBTIQ people taking those decision-making, visible, roles,” Parkinson said.

The Victorian Minister for Women and Prevention of Family Violence, Gabrielle Williams, agrees that the effect of the pandemic has been gendered.

“It’s clear that across the world women have been significantly and disproportionately impacted by COVID-19, with women shouldering even more of the burden of unpaid caring responsibilities whilst also being hardest hit by the economic impacts of the pandemic,” she told Al Jazeera.

“We know that family violence can occur in every community, and access to culturally and linguistically appropriate support is critical – which is why we’re investing in specialist services, programmes and support services,” she said.

In March this year, Victoria became the first Australian state to implement a Gender Equality Act, which aims to tackle the structural inequalities experienced by women, both economically and socially.

With the lockdown set to end, Shemsiya told Al Jazeera that while she feels fortunate for the support of her children’s school and the success of her African homeschooling project, she also hopes the government will reach out to migrant and refugee families to ask what can be learned from the lockdown experience.

“I can hear a lot of struggle, a lot of complaints in a lot of families,” she said. “It’s very important to interview families and find out what happened. The pressure is not only on parents, the pressure is on children too.” 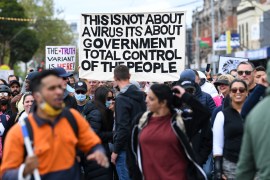 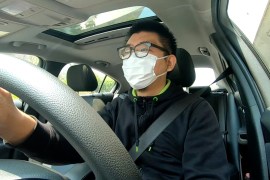 A Chinese filmmaker ventures into Wuhan and discovers unseen psychological trauma in the aftermath of lockdown. 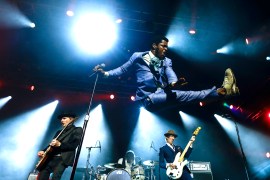