A Danish man suspected of a deadly bow-and-arrow attack on a small Norwegian town was a Muslim convert who was flagged as having being radicalised, police said.

Wednesday’s attack, which is being considered an act of terrorism, saw five killed – four women and one man between the ages of 50 and 70 – and two people were wounded as the suspect walked around shooting people with arrows.

“There earlier had been worries of the man having been radicalised,” police chief Ole B Saeverud told reporters on Thursday.

The attack took place in the evening in the town of Kongsberg, home to about 28,000 people, which lies about 68km (42 miles) southwest of the capital, Oslo.

The suspect, who was apprehended 20 minutes after the attack began and is now in custody in Norway, is believed to have been acting alone, police said earlier.

He is being held on preliminary charges, which is a step short of formal charges. He will formally face a custody hearing Friday. Police believe he acted alone.

Norway’s domestic security agency, known by its acronym PST, cited various aspects of the assault in explaining its belief that the suspect’s actions “currently appear to be an act of terrorism.”

“Attacks on random people in public places are a recurring modus operandi among extremist Islamists carrying out terror in the West,” the domestic security agency said.

The agency said that “the most probable scenario of an extremely Islamist terrorist attack in Norway is an attack carried out by one or a few perpetrators with simple weapon types, against targets with few or no security measures.”

It added that the suspect “is known to PST from before, without PST being able to provide further details about him.”

“The investigation will clarify in more detail what the incidents were motivated by,” PST said in a statement.

Ann Iren Svane Mathiassen, the police attorney who is leading the investigation, told Norwegian broadcaster NRK that the suspect will be assessed by forensic psychiatric experts Thursday.

“This is not unusual in such serious cases,” she was quoted as saying.

Police said the suspect had been taken to a police station in the nearby town of Drammen.

The TV2 station reported that the man also had a knife or other weapons.

After the attack, the police directorate said it had immediately ordered officers nationwide to carry firearms. Norwegian police are usually unarmed, but officers have access to guns and rifles when needed.

“This is an extra precaution,” the directorate said in a statement.

Public broadcaster NRK’s website published an image sent by a witness of a black arrow sticking out of a wall.

Armed violence is rare in Norway, but the country has suffered far-right attacks in the past.

Anders Behring Breivik carried out twin attacks that killed 77 people on July 22, 2011. Breivik first set off a bomb in the capital Oslo next to the building that housed the prime minister’s office, then went on a shooting spree at a summer camp for left-wing youths on the island of Utoya.

In August 2019, self-proclaimed neo-Nazi Philip Manshaus opened fire into a mosque on the outskirts of Oslo before being overpowered by worshippers. While no one was seriously injured, he had earlier shot dead his stepsister, who had been adopted from China, in what prosecutors termed a “racist act”. 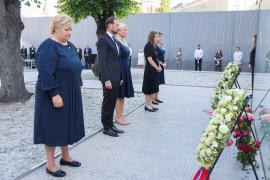 On sombre anniversary, massacre survivors warn Norway has ‘not stopped the hate’ which inspired far-right attacker. 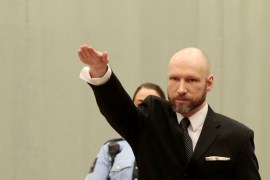 Why is the violent far right still able to organise online?

It’s been eight years since Anders Breivik, who received and spread violent ideas online, carried out the Norway attack. 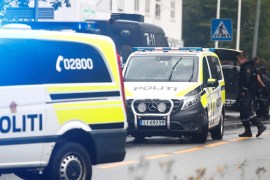 A lone gunman carrying multiple weapons was overpowered by members of the mosque before police arrived, witness says.