The United Nations’ top court has awarded Somalia control of most of a potentially oil- and gas-rich chunk of the Indian Ocean after a bitter legal battle with neighbouring Kenya over their sea border.

The International Court of Justice (ICJ) ruled on Tuesday that there was “no agreed maritime boundary” and drew a new border close to the one claimed by Somalia, although Kenya kept a part of the 100,000 square-kilometre (39,000-square-mile) area, chief judge Joan Donoghue said.

The ruling is legally binding, though the court has no enforcement powers.

The court rejected Kenya’s claim of the maritime boundary it sought, saying Kenya had not consistently maintained it.

But the court rejected Somalia’s pursuit of reparations after the country alleged that some of Kenya’s maritime activities had violated its sovereignty.

“I thank Allah for … for the fruit of the long struggle made by the Somalis in preventing Kenya’s desire to claim ownership of  part of Somalia’s sea,” Somalia’s President Mohamed Abdullahi Mohamed said in a broadcast on his office’s Facebook page.

In a speech later on Tuesday, Mohamed urged Kenya to “respect the international rule of law”.

“It should instead see the decision of the court as an opportunity to strengthen the relationship of the two countries,” the president, widely known as Farmajo, said.

Kenya said last week that it would not recognise the court’s judgement, alleging that the judicial process had “obvious and inherent bias”.

Its statement acknowledged that the judgement would have “profound security, political, social and economic ramifications in the region and beyond”, while urging Kenyans to remain calm. 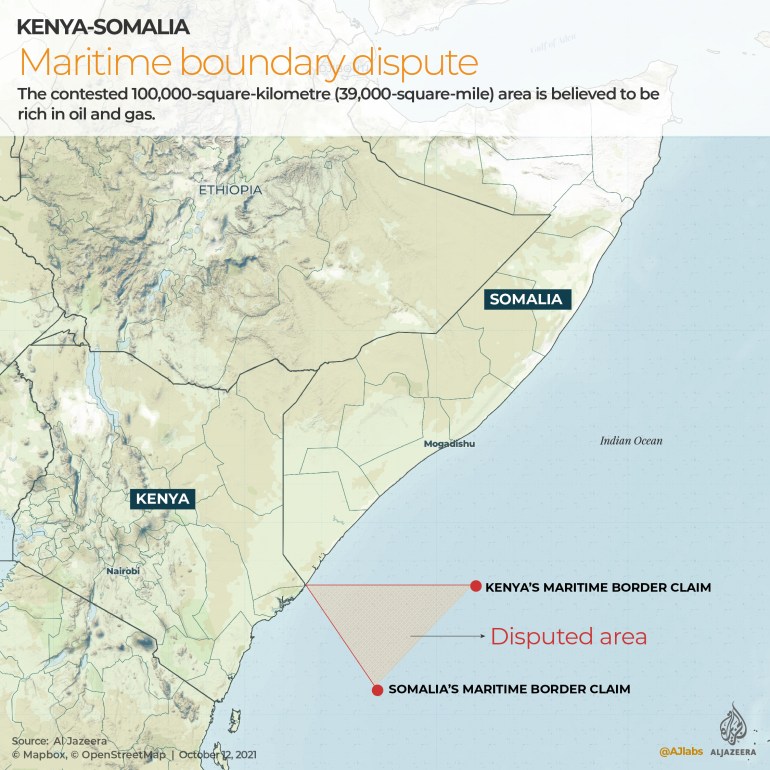 Somalia filed the ICJ case over the countries’ maritime boundary in 2014, contributing to their strained relations.

The court based at The Hague noted that it “cannot ignore the context of the civil war” that destabilised Somalia for years and limited its government functions. It also found “no compelling evidence that Somalia has acquiesced” to Kenya’s claim of a maritime boundary along a parallel line of latitude.

Al Jazeera’s Malcolm Webb reporting from Nairobi, Kenya said the “new maritime border that the court has specified gives most of the disputed territory to Somalia and a little sliver of it to Kenya.

“The court has already said Kenya does not have any legal grounds to reject this judgement because it signed up to this court’s authority in the 1960s and can’t retroactively renege on that,” Webb said.

“The question now is will Kenya accept this ruling and if it does not, it puts Somalia in a stronger position to seek support from the UN to seek diplomatic support in enforcing or obliging Kenya to uphold this ruling.”