Beirut, Lebanon – A “huge fire” that broke out in a fuel storage tank at Lebanon’s Zahrani oil facility has been contained, the country’s energy minister said from the site.

At least 25 fire trucks were present on site, as the firefighters tried to extinguish the fire in the tank and cool surrounding tanks to prevent the fire from spreading.

There were no injuries or casualties reported, according to the head of the facility Ziad el-Zein.

The tank that caught fire contained petrol that belonged to the Lebanese army.

Translation: A large fire has broken out in the oil facility in Zahrani, south of Lebanon

Energy Minister Walid Fayyad told reporters the cause of the fire remained unknown and he did not know if it was intentional.

He added that the fire broke out while workers were transferring fuel and estimated that 250,000 litres of petrol burnt in the fire.

“We need to wait for the results of the investigation and have to be ready to take all the necessary measures based on the results,” Fayyad said. “The priority now is the people’s safety.”

El-Zein told reporters that the storage tanks were properly maintained despite resources stretching thin due to the country’s financial crisis.

“If we had not done preventative maintenance and regulations, we would have been in a different situation now,” he said, saying that they averted what could have been a “catastrophe”.

The Lebanese Army had earlier cleared residents from the area and diverted traffic. 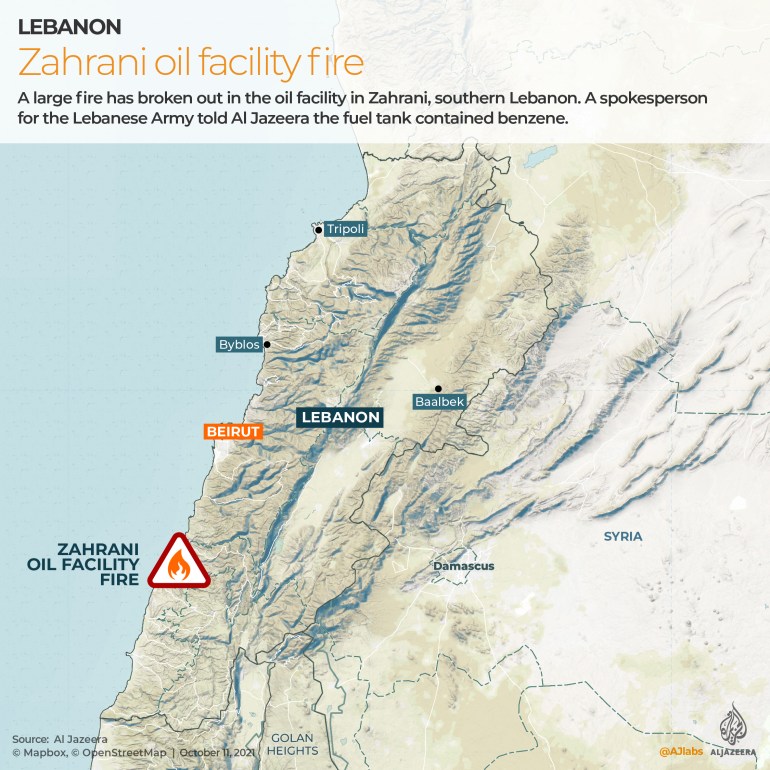 The tanks at the Zahrani oil facilities store petrol and diesel that the government has purchased.

“In addition to that, there is also some fuel for the army and reserve stock,” Energy Researcher Marc Ayoub told Al Jazeera.

The incident is another setback for cash-strapped Lebanon as it continues to struggle with a crippling petrol and fuel crisis that has paralysed public life.

State electricity is virtually non-existent, as most households and businesses rely primarily on private generators.

Fuel prices have been hiked almost weekly, as the government slowly rolls back on expensive subsidies.

Prime Minister Najib Mikati said that resolving the fuel and electricity crisis is one of his government’s key priorities, as he tries to steer Lebanon into recovery from an economic crisis that plunged three-quarters of the population into poverty and devalued the local currency by around 90 percent.

One of Lebanon’s key power stations is also located in the vicinity.

The Zahrani power plant went out of commission on Saturday after running out of fuel. The Lebanese army donated some of its reserve stock on Sunday.

In late September, a vessel unloaded 16,000 tonnes of Iraqi fuel at the Zahrani facility, the first shipment in a swap deal between Beirut and Baghdad.

He said German company Combi Lift had reported the matter to Lebanon’s atomic energy authority, which concluded that the material was “nuclear”.

Combi Lift, however, said there were no concrete results yet, and the issue has not been discussed since.

Monday’s blaze comes just over a year after the massive port blast in Beirut that killed more than 200 people, wounded thousands and destroyed nearby neighbourhoods in the capital.

Combi Lift had been hired after the blast to examine the destroyed Beirut Port and discovered 58 containers of hazardous material that had reportedly been stored there for decades.