Beita, Occupied West Bank – For the first time since it was taken over by Israeli settlers, hundreds of Palestinians from this besieged village managed to reach their confiscated land.

With the start of the olive harvest season in Palestine, residents and landowners of Beita headed to the peak of Jabal Sabih (Mount Sabih) on Sunday to pick their crops, expecting to be blocked by the Israeli army.

The area has been the site of the illegal Israeli outpost of Evyatar, where earlier this year dozens of settlers set up caravans under the protection of the Israeli military.

“We were all afraid that we wouldn’t be able to reach our lands,” said Aisha Khader, 62, whose family owns plots on Jabal Sabih.

“I couldn’t sleep last night out of fear. We were very apprehensive. I was afraid for my children and their kids, fearing any attacks from settlers or [the army] throwing gas bombs at us,” Khader told Al Jazeera.

The Palestinian families made it to the edges of their land – some 60 metres (200 feet) away from the settler outpost – as Israeli soldiers stood guard.

Jabal Sabih in Beita, a Palestinian village on the southern outskirts of Nablus in the northern occupied West Bank, has been the site of intense confrontations this year after numerous attempts by Israeli settlers to take over Palestinian areas.

In May 2021, about 50 Israeli settler families moved in after they erected a set of caravans on Jabal Sabih, spanning about 35 dunams (3.5 hectares). Their presence, along with the army to protect them, meant Palestinians could not access their areas.

Following Beita’s daily protests, confrontations, and “night confusion” resistance activities that began in March, the settlers evacuated in early July. But the army remains stationed there, guarding the caravans and preventing Palestinians from reaching their land.

The Israeli occupation army has killed seven Palestinians with live ammunition since the beginning of confrontations in Beita, with the latest shooting on September 24. Hundreds have also been wounded by rubber-coated steel bullets and tear gas canisters.

The area is under threat of formal confiscation by the Israeli army, who may declare it “state land” or turn it into a military base.

With the start of the olive harvest season, Palestinian residents of Beita said they decided to come collectively and work their lands despite the presence of the Israeli army on their lands.

“We cannot give up any of these trees. They are like our souls and more,” said Khader. “The Palestinian farmer cannot live without his oil. We depend on olive oil in all aspects of our lives.”

Linah Maazouz al-Deir, 30, another resident of Beita, told Al Jazeera she went to Jabal Sabih to help her uncle’s family harvest their olive trees despite the fear of potential attacks by the Israeli army.

“Olive harvest day is a beautiful, special and tiring day. But it is marred by fear of the Israeli occupation,” she said.

“We cannot abandon our land. My father and uncle inherited it from my grandfather, and they all worked in it very hard. Many young men were martyred on this land. I hope that it will remain ours forever.”

Another farmer, Hilal Ahmad Khader Budair, 72, told Al Jazeera he owns a four-dunam (0.5-hectare) plot of land on Jabal Sabih, with some 65 olive trees he planted on it.

“We were afraid to come because we know this is an enemy that has no mercy,” said Budair, “but we had some hope that the army would step aside.”

The retired schoolteacher said he inherited his land from his father and grandfather. “This land was formed with the blood of martyrs, with the sweat and tears of our families, so how can we abandon it?

“We used to come here and not have to worry about Israelis in the whole area. This is our soil, our land, and our olives. We are the rightful inheritors of this land.”

Budair said while olive trees are the primary source of livelihood for Palestinian farmers in general, this reality is even more specific to Beita.

“There is not one centimetre in Beita’s lands that is not planted with olive trees. We did not grow any other trees because it is a mountainous area, and in the past, it was difficult to get to this area and difficult to transport water here,” he explained.

“We depended primarily on this blessed tree – it does not require much care, like other trees,” said Budair.

Beita’s residents have pledged to continue their protests until the Israeli military leaves the outpost.

Mounir Mohammad Khdeir said he came “to help people pick olives and to support their presence on this land”.

Khdeir told Al Jazeera he found the presence of many Palestinians on Sunday “very important”.

“Everyone came today to participate in the olive harvest – this is an indication of the priceless value of the land.” 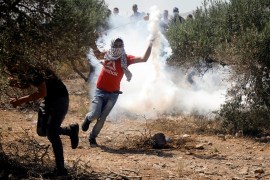 Palestinian village pays high price in defence of its land

Israeli settlers have made regular raids into Beita to chop down olive trees, vandalise property, and provoke locals. 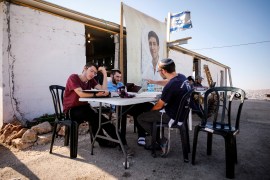 Several Palestinians have been killed and dozens wounded by Israeli forces supporting the illegal settlers at Evyatar. 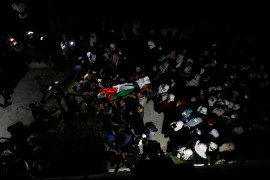 Mohammed Ali Khabisa, 27, was shot in the head by Israeli live fire in Beita during protest against illegal settlements.