International boxing champion Manny Pacquiao has formally filed his candidacy for president of the Philippines, as the country kicked off its election season with television celebrities, political scions and at least one inmate expected to be among thousands of candidates vying for national and local posts.

As he filed his papers for president on Friday, Pacquiao sprung a last-minute surprise, naming former Manila Mayor and current House of Representative member Lito Atienza as his running mate for vice president.

The two candidates were accompanied by their respective spouses as they filed their candidacies.

The Philippines’s election season has often been compared with a street festival that lasts for months, and despite the COVID-19 pandemic, supporters of the different candidates were out on the streets early on Friday to show their support – waving flags and carrying campaign banners.

The week-long registration process, which will last until October 8, is expected to draw tens of thousands of candidates, who will file for more than 18,000 positions nationwide – from the president to town council members.

A successor to President Rodrigo Duterte, who is constitutionally barred from seeking a second six-year term, will be elected in the May 9, 2022 ballot that is expected to draw more than 64 million eligible voters.

In an unprecedented move, Duterte has announced that he will run for vice president. His spokesman Harry Roque says the president has already signed his certificate of candidacy, although there has been speculation that he could withdraw later. Contenders can still be substituted until the middle of  November.

So far, just three candidates have declared their intention to run for president, the most famous being Pacquiao, the senator who this week hung up his boxing gloves to focus his attention on the fight for the presidency.

Pacquiao belongs to the ruling party PDP-Laban, headed by Duterte. But because of their political rift, the boxing champion ran as president under a regional party. However, that still leaves the ruling party split into two factions.

Manila Mayor Isko Moreno, a former actor, and Senator Panfilo Lacson, a former Philippines police chief, have also confirmed they will run. The three declared candidates are all former allies of Duterte.

But the spotlight will be on Sara Duterte-Carpio, the president’s daughter, despite her saying she will not run for higher office in next year’s poll.

Duterte-Carpio, 43, replaced her father as Davao City mayor when he became president, and she remains by far the most popular presidential prospect, according to successive opinion polls, although her numbers have declined recently.

Analysts say it is crucial her father’s successor is a loyalist, to protect him from potential legal action at home or by the International Criminal Court, over the thousands of state killings in his so-called war on drugs since 2016.

Critics say he is making a bid for the vice presidency in order to safeguard his political interests.   However, Duterte says his motivation is public service, not power.

Even if Duterte-Carpio misses the October 8 deadline for registration, she still has until November 15 to make a late entry – as her father did in 2015.

Ferdinand Marcos Jr, the son and namesake of the country’s former strongman, has also been nominated to run for president by his father’s party. He has yet to announce which position he is going for, but he is often mentioned as the potential running-mate of Duterte-Carpio.

Vice President Leni Robredo, who leads the opposition, is also being urged by supporters to run for the top post.

“In the coming days, please pray with me so that our decision will be what is best for our country,” she said.

Robredo defeated Marcos Jr who is well-funded in the race to become vice president in 2016.

Presidents and vice presidents are elected separately in the Philippines, frequently resulting in candidates from rival parties having to work together in office and often disagreeing on policies – such as Duterte and Robredo have had to do.

Election campaigns in the famously chaotic democracy are normally raucous and star-studded with contenders deploying celebrities to draw crowds to rallies.

Candidates are expected to perform on stage, with their charisma, singing and dancing skills arguably given more weight than their policies.

But one candidate who is seeking re-election in the Senate stands out as she will be campaigning from the detention centre she is in: Senator Leila de Lima. A longtime critic of Duterte, de Lima has been in jail since 2017 for alleged drug links that supporters say were fabricated to silence her.

“People have a sense that in this brief moment, they are the boss, to be wooed by suitors whom they demand sing, dance, act as clowns.” 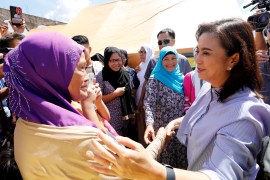 Philippine Vice President Leni Robredo seen as the ‘real opposition candidate’ in the race to replace Duterte in 2022. 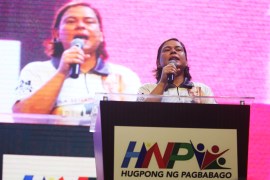 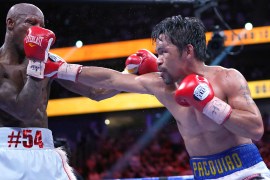 An emotional Manny Pacquiao says he is retiring from boxing to focus on his 2022 presidential bid. 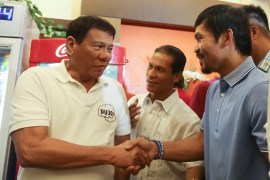