At least four people have died after hundreds of supporters of President Donald Trump violently occupied the US Capitol Building.

Washington, DC police chief Robert Contee said the dead included a woman who was shot by the US Capitol Police on Wednesday, as well as three others who died in “medical emergencies”.

Police said law enforcement agencies and Trump supporters deployed chemical irritants during the hours-long occupation of the Capitol building before it was cleared on Wednesday evening. Police said they arrested 52 people in the wake of the mayhem.

The woman was shot earlier on Wednesday as the mob tried to break through a barricaded door in the Capitol where police were armed on the other side.

She was taken to a hospital with a gunshot wound and later died.

Police found a cooler from a vehicle that had a long gun and Molotov cocktail on Capitol grounds.

Contee said 14 officers of the Metropolitan Police Department were injured during the demonstrations and at least two were being treated in a hospital.

She also extended a state of emergency for 15 days “to ensure peace and security through the inauguration of President Joe Biden and Vice President Kamala Harris”. 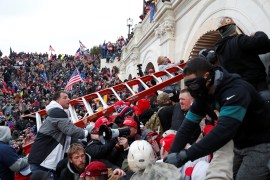 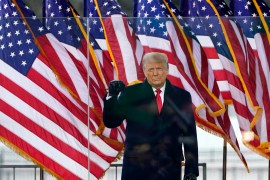 The 25th Amendment: Can Trump be declared unfit for office? 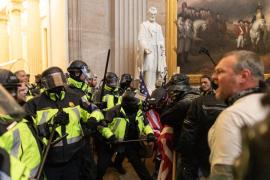 The jarring bedlam the world witnessed on Wednesday is only the beginning.