Democrat Raphael Warnock has defeated Republican Kelly Loeffler in one of Georgia’s two US Senate runoff elections, according to a projection by The Associated Press news agency, putting Democrats one seat away from majority control of the Senate.

In the extremely tight race, Warnock leads Loeffler 50.6 to 49.4 percent, with 98 percent of votes counted.

The second runoff, between Democrat Jon Ossoff and Republican David Perdue, is still too close to call. Although Ossoff holds a slim 0.4 percentage point lead and a winner has not been projected, he declared victory in a brief YouTube speech Wednesday.

If Democrats prevail in both races, the party will take control of the Senate, paving the way for Joe Biden to enact his agenda after he is sworn in as president on January 20.

“I am going to the Senate to work for all of Georgia,” Warnock said in live remarks broadcast on social media early on Wednesday morning. “To everyone out there struggling today, whether you voted for me or not, know this: I hear you. I see you. And every day I’m in the United States Senate, I will fight for you. I will fight for your family.”

Warnock will be up for election again in 2022, as this victory is to fill the remaining two years of the Senate term originally won in 2016 by Republican Johnny Isakson, who stepped down last year and was temporarily replaced by Loeffler.

The election results show how the politics in Georgia, a state long dominated by Republicans, is changing. In November, Biden defeated President Donald Trump by 11,779 votes, becoming the first Democratic presidential candidate to win the state since 1992. Warnock’s success – and the tight race between Ossoff and Perdue – further show that Georgia will continue to be a competitive battleground.

“With new votes joining the tally, we are on a strong path,” tweeted Stacey Abrams, the former Georgia state minority leader who helped support the Democratic candidates by registering hundreds of thousands of new voters. “But even while we wait for more, let’s celebrate the extraordinary organizers, volunteers, canvassers & tireless groups that haven’t stopped going since Nov. Across our state, we roared.”

With new votes joining the tally, we are on a strong path. But even while we wait for more, let’s celebrate the extraordinary organizers, volunteers, canvassers & tireless groups that haven’t stopped going since Nov. Across our state, we roared. A few miles to go…but well done!

The conclusion of these historic double-barrelled elections comes after a gruelling two-month campaign sprint in which the candidates and outside groups spent more than $500m combined since Election Day – November 3. Given the high stakes of the outcome, the races captivated the American political world over the December holidays, and drew nationwide attention.

The growth of urban and suburban areas around cities like Atlanta combined with an increasingly diversified population has increased Democratic status in the state, potentially reshaping the state’s structures of political power.

“The Atlanta area is rapidly changing, and that is outweighing a lot of rural Georgia,” said Jessica Taylor, a political analyst for the Cook Political Report. “It’s a purple state, but it’s also perhaps a centre-right state. Very slightly still, but it’s one that’s changing.”

Warnock’s most robust support came from areas in and around cities, such as Atlanta, Macon and Savannah, while Perdue and Loeffler relied on support from the state’s peripheries that voted in high numbers for Trump in 2016 and 2020.

The runoffs also broke records for political spending, as outside groups and party campaign committees poured hundreds of millions of dollars into the race. Although the races were contained to one state, they served as a test for political organising power.

“We’re seeing what kind of mobilization is possible when resources aren’t a consideration,” said Andra Gillespie, an associate professor of political science at the Emory University in Atlanta.

In many districts, the votes for the Democratic candidates outpaced support for Biden in November, which served as a key to Warnock’s victory.

Despite the importance of rallying Trump supporters to the Republican cause, the president made himself a distraction – and possibly a hindrance – to Republican participation.

Instead of focusing his political efforts exclusively on turning out the vote for Loeffler and Perdue, the president spent time lashing out at Republican officials in the state who oversaw the election he lost to Biden, accusing them of running what he regularly called a “rigged” election. His rhetoric cast doubt on the integrity of the voting process and suppressed the vote from the very people Republicans were trying to turn out.

With early voting participation high in traditionally Democratic areas, Republicans banked their victory on high election day turnout. Republican voters, however, did not show up in the numbers they needed on election day to surpass the Democrats’ early lead.

Trump has often discouraged mail-in voting, saying, without evidence, that it is ripe with fraud. His influence may have discouraged early participation as well.

“The Republican leaders, from the party to the president, have convinced their base there is no point in voting and the voters have believed it,” said Erick Erickson, a conservative commentator in Atlanta. “It is simply amazing.”

Republican officials in Georgia were quick to blame the president for the poor showing. Gabriel Sterling, a Republican who oversaw the state’s voting systems, said the responsibility for the losses sits “squarely on the shoulders of President Trump and his actions since November 3rd”.

“When you tell people, your vote doesn’t count and has been stolen, and people start to believe that, then you go to the two senators and ask the secretary of state to resign and trigger a civil war in the Republican Party when we need to unite, all of that stems with his decision-making since the November 3 election,” Sterling, who had urged Georgians to support Loeffler and Perdue, said in an interview with CNN on Tuesday.

Should Ossoff beat Perdue, the double Democratic victories will mark a total shift of power in Washington, with Democrats controlling the White House and both houses of Congress for the first time since 2011.

Kentucky Republican Senator Mitch McConnell, who has served as majority leader since 2015, will likely be replaced by Democrat Chuck Schumer of New York, who currently serves as minority leader. And Democratic Vice President-elect Kamala Harris, who will be sworn in on January 20, will serve as Senate president and break any tie votes. 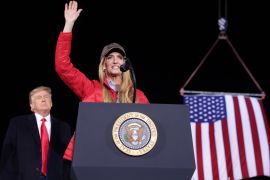 Federal COVID relief aid has helped shore up Georgia’s businesses and bring its unemployment rate below the US average. 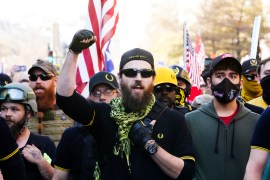 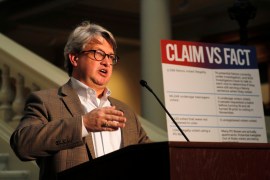