Egyptian prosecutors opened an investigation into the deaths on Sunday of at least four coronavirus patients at a public Egyptian hospital, after a video of nurses struggling to keep the patients alive was shared widely on social media.

The governor of Sharqia province denied allegations by a relative of one of the patients that the deaths were caused by a lack of oxygen at the government-run intensive care unit treating COVID-19 patients.

Governor Mamdouh Ghorab said the patients died because they suffered chronic diseases in addition to the virus. The relative, who also filmed the video, offered no immediate evidence to back up their claim that the hospital ran out of oxygen.

Egypt, the Arab world’s most populous country with more than 100 million people, is facing a surge in confirmed virus cases and renewed calls for the government to impose a lockdown to contain a second wave of the pandemic.

The Sharqia prosecutor’s office said they were investigating the deaths.

The hospital director and doctors were being questioned, according to an official at the public prosecutor’s office in Cairo who spoke to The Associated Press on condition of anonymity because they were not authorised to brief the media.

The four dead were two women in their 60s and two men, 76 and 44 years old, according to a local news outlet. There are currently 36 virus patients being treated at the hospital’s isolation ward, the governor said.

“They all died.” An eyewitness from inside the Hussainiya Isolation Hospital in Sharqia, Egypt documents the moments of panic, horror and tragedy after the oxygen was CUT OFF from Coronavirus patients in hospital’s Intensive Care Unit. #العناية_المركزة pic.twitter.com/9Rf1bTX3A2

The deaths follow similar allegations by a relative last week that two patients died because of a lack of oxygen at a government-run hospital elsewhere in the Nile Delta.

Prosecutors in Menoufiya province have launched an investigation into the cause of the deaths on Friday.

Egypt’s top health authority has announced that a Chinese vaccine made by Sinopharm has been approved for emergency use, and inoculations would begin within two weeks.

In televised comments on Saturday, health minister Hala Zayed said negotiations were also under way to procure two other vaccines – one from Oxford University and AstraZeneca, as well as one from Pfizer and its German partner BioNTech.

Egypt has seen a spike in daily reported COVID-19 cases in recent weeks.

The health ministry announced more than 1,400 new cases and 54 deaths on Saturday, one of the highest official daily tallies since the start of the pandemic last year.

However, the actual number of COVID-19 cases in Egypt are thought to be far higher, in part due to limited testing and uncounted patients who are being treated at home or in private hospitals.

Al Jazeera journalist ‘in prison under arbitrary and illegal detention’ for four years without charge. 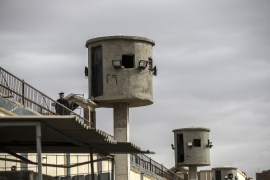 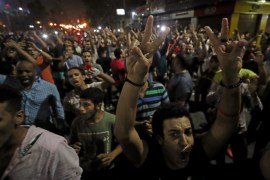 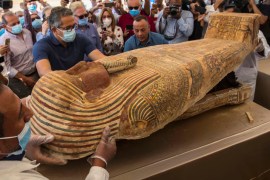 Archaeologists in Egypt opened an ancient sarcophagus, sealed more than 2,500 years ago, in front of a live audience.