Dr Gene Nisperos is an assistant professor at the University of the Philippines (UP) College of Medicine in the country’s capital, Manila. As a medical frontliner, he is on the priority list for vaccination against the coronavirus when the government releases its promised first vaccines next month.

The medic is particularly critical of the government’s decision to disallow Filipinos from choosing the type of coronavirus vaccine they receive. The government  has said it will buy millions of doses from China’s Sinovac despite the absence of “reliable data” and incomplete clinical trials.

These sorts of issues will only discourage people from getting vaccinated, he says.

“The people with vaccine hesitancy are health workers themselves,” Dr Nisperos said.

“If you cannot convince your health personnel regarding the vaccination programme, then how are you going to convince ordinary citizens?”

Many Filipinos have not forgotten the botched launch of the anti-dengue vaccine Dengvaxia in 2016 under Duterte’s predecessor Benigno Aquino III.

The vaccine was touted as key to tackling the deadly mosquito-borne disease that is prevalent in many cities in Southeast Asia. But after less than two years of being introduced in the Philippines, it was abruptly suspended due to worries about serious adverse effects. The controversy has been partly blamed for the dramatic decline in Filipinos’ support for vaccination – from as high as 90 percent in 2015 to a low of 60 percent just before the COVID-19 pandemic hit.

The Philippines is banking on vaccinations to help it escape a pandemic that has killed more than 10,000 people across the archipelago and forced cities and towns into prolonged lockdowns. The pandemic has been blamed for the 9.5 percent drop of its gross domestic product or GDP in 2020 – the worst economic slump since the post-war period.

But Dr Nisperos and other medics worry the Duterte administration might be repeating Aquino’s mistakes.

Dr Harold Henrison Chiu, an endocrinology specialist at the Philippine General Hospital in Manila says he will only consider being jabbed with the Sinovac vaccine if all the data is made public, including the cost, given the “inconsistent” and sub-par results of the medication’s clinical trials in other countries. He says Filipinos should be able to choose which vaccine they receive.

“Our citizens deserve the safest, most efficacious and cost-effective choice out there.”

It's too easy to criticize a man when he's out of favor, and to make him shoulder the blame for everybody else's mistakes. We have seen cracks at the vaccination plan , lack of transparency on the pricing and turtle paced procurement of vaccines. We deserve to know. https://t.co/f1z7OA3q9f

So far, the Philippine government has granted emergency approval to the vaccines developed by Pfizer-BioNTech and AstraZeneca which are both already in use elsewhere in the world.

However, Pfizer-BioNTech has yet to sign a contract with the Philippines, while AstraZeneca, which secured approval on Thursday, has committed 30 million doses to the country, although the actual delivery date has not been confirmed.

But the country’s deal with Sinovac has proved more controversial with the public.

While the Chinese company has yet to complete third-stage clinical trials for the vaccine – a requirement for the application for emergency-use authorisation (EUA) – Manila has already signed a contract with Beijing to secure 25 million doses.

Some 50,000 shots are due to arrive in Manila by next month, even before EUA approval has been given.

The government has refused to reveal how much it paid for the vaccine, citing Sinovac’s non-disclosure clause.

Without the green light from Filipino regulators, Dr Paolo Medina a primary health care physician says he will not consider taking the Sinovac vaccine, and will instead wait for other options.

“But if the emergency use authorisation comes out and the process is transparent enough, as a health professional, I will consider it given the urgency of the pandemic,” said Dr Medina, who teaches community medicine at the University of the Philippines.

A December 2020 survey conducted by OCTA Research, which analyses Philippine health statistics, found that only 25 percent of respondents in Metro Manila were willing to get an anti-COVID shot.

Some 28 percent of the people surveyed said they would refuse any type of vaccine, while 47 percent were undecided and said it depended on the brands available.

A separate survey conducted between November and December by the Manila-based public opinion pollster, Pulse Asia, meanwhile, showed that only 32 percent of Filipinos nationwide wanted to get vaccinated against the coronavirus and 47 percent said they did not want to get vaccinated at all due to safety concerns.

The situation is a sharp reversal from earlier years. As recently as 2015, about nine out of 10 Filipinos said they believed in the importance of vaccines, according to the Global Vaccine Confidence Index.

The hesitancy can be traced back to the controversy surrounding Dengvaxia, which was administered to schoolchildren beginning in 2016.

“Many of the safeguards that were in place for the longest time were violated, and were intentionally not followed, in order to push for a vaccine that was still in research level,”  Dr Nisperos, of the University of the Philippines, said of the effort to approve Dengvaxia.

“The entire vaccination programme was conducted under very dubious, and non-medical conditions that put children’s lives at stake. The Department of Health betrayed people’s trust.”

For 19 months beginning in April 2016, more than 800,000 schoolchildren from pilot areas in Metro Manila and five provinces received shots of the world’s first dengue vaccine, which had been developed  by the French pharmaceutical company, Sanofi Pasteur.

But in December 2017, the programme was abruptly suspended by the Duterte administration, after a follow-up study by Sanofi found that the vaccine posed a greater risk to people who had not previously been infected by the virus.

It mirrored a World Health Organization (WHO) warning, which Filipino health officials failed to heed before the vaccination programme was launched. WHO had found that Dengvaxia “may be ineffective, or may even increase that risk” on those who had not yet been infected at the time of the first vaccination.

Experts from the Philippine General Hospital later found that three of the children died of “dengue shock syndrome”, of which two were “possibly caused by vaccine failure.” But no conclusive findings were reached. Sanofi-Pasteur also says its vaccine remains safe, and has been given regulatory approval for use, under some restrictions, by the US and the European Union.

A separate investigation by the Philippine Congress concluded that Aquino administration officials acted in haste in approving the vaccine.

Although the vaccination had completed the three trials required by the Philippine Food and Drug Administration, it went ahead despite unfinished clinical trials from the country’s own medical researchers, which was the recommended practice to ensure safety and efficacy.

The Philippines is now battling with one of Southeast Asia’s biggest coronavirus outbreaks and is eager to find a way out of a pandemic that has forced the prolonged lockdown of many parts of the country, including Manila.

But experts say the “lack of transparency” over the procurement of Sinovac vaccine will make the government’s task of fighting the pandemic even more difficult.

“How can you influence a lot of people to use Sinovac, when you have not yet reviewed the regulatory documents?” Dr Tony Leachon, a former senior adviser to the Duterte government’s COVID-19 response team, told Al Jazeera.

Leachon notes that none of the mayors from the Philippines’ major cities has expressed their willingness to buy the Chinese-made drug.

“What are you going to do with the Sinovac vaccine if the residents of the local government will not actually accept it for their use,” Dr Leachon said.

If the government would still insist on pushing for the Sinovac shot in the priority list, then it should “show leadership” by inoculating cabinet officials and influential personalities first, he said.

After initially declaring last year that he was willing to be vaccinated in public using a vaccine from Russia, Duterte has since sidestepped the question. Earlier this week, his spokesman said that the president will do it in private, because he wants to be injected in the buttock.

In Indonesia, which took part in late-stage trials for Sinovac, President Joko Widodo was the first to receive the shot. It has now been rolled out across Brazil, Indonesia, and Turkey. Trials have shown widely varying efficacy rates from only 50 percent in Brazil to 65 percent in Indonesia and a high of 91 percent in Turkey.

Dr Medina, the community medicine professor from the University of the Philippines, says that aside from transparency, it is equally important for the government to have accountability if it wants to ensure public faith in its vaccination programme.

He says the recent controversy over the vaccination of Duterte’s security detail using smuggled vaccines from China, only served to further erode people’s trust in the process.

“The fact that there is no accountability conveys a message that we are not serious.”

Dr Medina says that the government must set an example by following all the necessary procedures.

“It will really erode the whole confidence on the vaccine forever, if we shortcut the processes now,” Dr Medina said.

Duterte has long relied on the military to lead his administration’s coronavirus response.

But with public confidence waning, and the need to convince a sceptical public of the need for vaccination, some say the president needs to put scientists and public health experts rather than generals at the front of the campaign.

“Once we do that, we can use a better lens to decide a national action plan against COVID-19″ based on science,” said Dr Nisperos, who also leads Second Opinion PH, an alternative voice in public health.

“The militarist pandemic response has proven itself to be useless and counterproductive.” 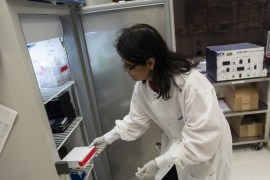 Data also shows vaccine nearly as effective in protecting against the more highly contagious variant in the UK. 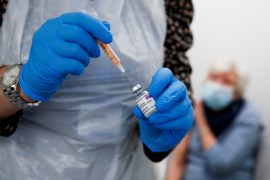 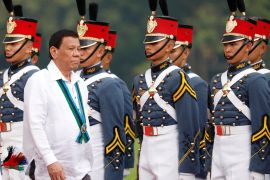 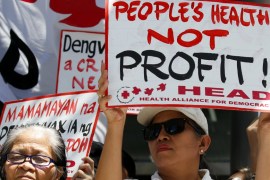 Over 70 people die in outbreak blamed by officials on scandal that eroded public confidence in immunisation programmes.