The man photographed placing his feet on top of House Speaker Nancy Pelosi’s desk during the Capitol occupation has been ordered to stay behind bars as proceedings over his trial continue.

“He not only entered the Capitol without authorisation, but he strutted into the office of Speaker of the House Nancy Pelosi,” Howell, who Politico reported as “brimming with anger” over the Capitol insurrection, said.

Barnett, of Arkansas, previously told local news he “threw my feet up on the desk” after entering Pelosi’s office, where he noticed he was bleeding. This caused him to pick “up the envelope and put it in my pocket, and I put a quarter on the desk cause (sic) I’m not a thief”.

The riot occurred as a joint session of Congress met to certify President Joe Biden’s electoral victory after months of former President Donald Trump and his allies repeating unfounded claims the election was stolen.

A California gym owner previously known for violating COVID-19 restrictions was arrested and charged for his alleged role in the January 6 Capitol insurrection and accused of making comments about plans to occupy the grounds as early as December.

Jacob Lewis, 37, faces charges of knowingly entering or remaining in any restricted building or grounds without lawful authority and violent entry and disorderly conduct on Capitol grounds, according to a federal complaint released on Wednesday.

The complaint features an affidavit from an FBI agent whose name is redacted. It notes Lewis was wearing a bright red “Trump” hat during the storming of the Capitol, which aided in his identification.

Jacob Lewis, 37, a resident of Victorville CA (owner of "The Gym HD" in Victorville) has been arrested. pic.twitter.com/7EJ5DcghvQ

Five people died as a result of the riot, including one Capitol police officer.

The affidavit says authorities received a tip from a friend of Lewis that he had flown to Washington, DC, from Victorville, California ahead of the rally.

Lewis previously received attention when he opened The Gym HD in Victorville, on May 1, in spite of orders to keep businesses and gyms close to help prevent the spread of COVID-19.

The affidavit seems to suggest rioters had plans to occupy the US seat of government as early as December.

“This person stated that during a conversation in December 2020, [Lewis] told them to ‘watch what happens to the Capitol on the 6th. This person said that [Lewis] had shown them pictures of firearms and previously asked them if they could get [Lewis] ammunition,” the document says.

Jacob Lewis, 37, of #Victorville, was arrested today by FBI Agents for his role at the U.S. Capitol on 1/6. Lewis was released on 50K bond & ordered to appear virtually on 2/10 before a D.C. court. The criminal complaint charging Lewis can be found here: https://t.co/YK0gIrQLF1

Antifa, short for Anti-Fascist, is a loose group of far-left activists who often use violence in confrontations with the far right. Claims they were responsible for the violence are unfounded.

Law enforcement has faced criticism for inaction on plans to occupy the Capitol, much of which was done on publicly available online forums.

Interim Capitol Police Chief Yogananda Pittman apologised on Tuesday for “failures” during the riot, including a lack of manpower and supplies, lax enforcement of a lockdown issued during the insurrection and no adequate communication plan.

Acting head of the FBI, Steven D’Antuono, told reporters at a news conference the FBI warned local law enforcement about the risks when asked about the subject a week after the riot.

Roughly 100 people have been arrested and face federal charges, according to the Justice Department’s website. More are expected to follow.

The US Department of Homeland Security, similar to interior ministries in other countries, warned of “domestic extremist violence” in the coming months in a bulletin released on Wednesday. 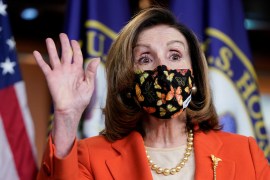 Riley June Williams has been charged with entering a restricted building and disorderly conduct during US Capitol riot. 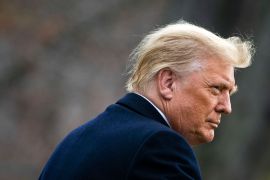 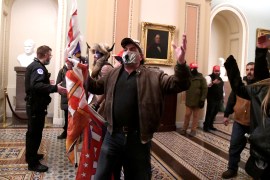 As world condemns riot at US Capitol, researchers say the United States can expect more far-right rallies and violence.