China on Friday said it will “no longer recognise” the British National (Overseas) passport for Hong Kong people, as the United Kingdom prepares to open its doors to millions more residents of its former colony following a Beijing security crackdown.

“From January 31, China will no longer recognise the so-called BNO passport as a travel document and ID document, and reserves the right to take further actions,” foreign ministry spokesman Zhao Lijian told reporters.

Al Jazeera’s Katrina Yu, reporting from Beijing, said the decision by China did not come as a surprise to many.

“Beijing has been mulling over this move for months and it is related to the national security law… [which] outlaws any separatism or any subversions against the government,” she said.

The Al Jazeera correspondent said dozens of people in Hong Kong have been arrested since the law was imposed.

Meanwhile, on Friday, the UK government promised to stand by the people of its former colony.

Holders of the BNO status – a legacy of UK rule over Hong Kong up to 1997 – will from Sunday be able to apply to live and work in the UK for up to five years, and eventually seek citizenship.

Before the change, BNO passport holders have had only limited rights to visit the UK for up to six months, and not to work or settle.

The UK says it is acting in response to a National Security Law imposed by China last year which has devastated Hong Kong’s democracy movement and shredded freedoms meant to last 50 years under the 1997 handover accord.

“I am immensely proud that we have brought in this new route for Hong Kong BN(O)s to live, work and make their home in our country,” Prime Minister Boris Johnson said in a statement.

“In doing so we have honoured our profound ties of history and friendship with the people of Hong Kong, and we have stood up for freedom and autonomy — values both the UK and Hong Kong hold dear.”

Any Hong Kong resident born before 1997 is eligible for BNO status. The new visa path opens up entry to the UK to an estimated 2.9 million adults in Hong Kong and another 2.3 million of their dependents.

In practice, London projects that up to 322,400 of Hong Kong’s 7.5 million population will take up the visa over five years, benefitting the UK economy by up to 2.9 billion pounds ($4bn).

The new pathway will not come cheap.

Shorter, cheaper visas for 30 months will also be available.

“We have been clear we won’t look the other way when it comes to Hong Kong. We will live up to our historic responsibility to its people,” Foreign Secretary Dominic Raab said.

“China’s imposition of the National Security Law in Hong Kong constitutes a clear and serious breach of the [pre-handover] Sino-British Joint Declaration contrary to international law.”

The security law was imposed on Hong Kong last June in response to 2019 protests, targeting acts Beijing deems to be secession, subversion, terrorism or collusion with foreign forces.

Mass arrests of pro-democracy figures have followed. Some have fled Hong Kong for the West, including to Britain.

Between July 2020 and January 2021, about 7,000 people with BNO status and their dependents have already been given exceptional leave to live in the UK. 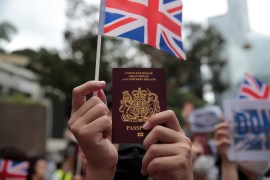 Under scheme that comes into effect on Sunday, Hong Kong people with BN(O) status will have path to UK citizenship. 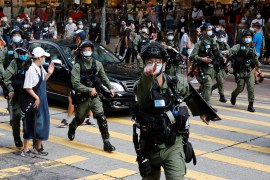 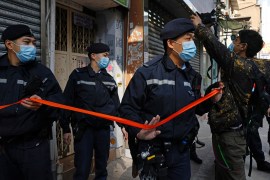 Young activists now in exile tried to flee to the self-ruled island of Taiwan in late July.