The United States has called for the immediate withdrawal of Russian and Turkish forces from Libya after a deadline for them to leave was ignored.

Under an UN-backed ceasefire signed in October last year, foreign troops and mercenaries were to pull out of Libya within three months.

That deadline passed on Saturday with no movement announced or observed on the ground.

“We call on all external parties, to include Russia, Turkey and the UAE, to respect Libyan sovereignty and immediately cease all military intervention in Libya,” the acting US ambassador Richard Mills said on Thursday during a UN Security Council meeting on Libya, which has seen a decade of fighting since the overthrow of longtime ruler Muammar Gaddafi.

“Per the October ceasefire agreement, we call on Turkey and Russia to immediately initiate the withdrawal of their forces from the country and the removal of the foreign mercenaries and military proxies that they have recruited, financed, deployed and supported in Libya,” said Mills.

The statement comes a year after a Berlin summit brought together backers of the main warring factions in Libya, with world leaders pledging to end foreign interference and work towards a permanent ceasefire.

Reporting from the UN, Al Jazeera’s Diplomatic Editor James Bays said that latest developments were likely to “concentrate minds in Turkey and the UAE about how they will deal with the new Biden administration”.

He highlighted that the White House put on hold an arms sales deal agreed by the Trump administration to sell 50 F-35 fighter jets to the UAE.

The UN estimates there are about 20,000 foreign troops and mercenaries helping the opposing sides in Libya: The UN-recognised Government of National Accord (GNA) in Tripoli and renegade military commander Khalifa Haftar in the east.

Turkey backs the GNA. It also has a military base in Al-Watiya on the border with Tunisia under a 2019 military accord.

Last December, Ankara extended by 18 months its authorisation for Turkey’s troop deployment in Libya, in apparent disregard of the ceasefire deal.

Haftar has the backing of the UAE, France, Egypt and Russia.

Most of the foreign forces are concentrated around Sirte, at Al-Jufra air base held by Haftar’s forces 500km (300 miles) south of Tripoli and further west in Al-Watiya.

Moscow denies any link to the mercenaries, but UN experts last May confirmed the presence of fighters of the Wagner group, allegedly close to Russian President Vladimir Putin. 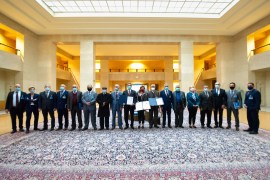 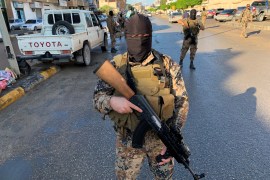 Arab League also presses for a solution to threat posed by armed groups and militias as Libya strives for peace. 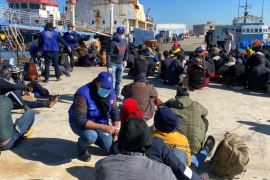 Migrants returned to Libyan soil and are likely to be held in detention centres criticised by rights groups.