AstraZeneca’s COVID-19 vaccine should only be given to people aged between 18 and 64, Germany’s vaccine committee has recommended, a day ahead of a decision by European regulators on whether to approve the drugmaker’s shot.

The recommendation for Germany comes as the European Union, which is scrambling for vaccine supplies, warned AstraZeneca to deliver shots as promised despite a shortfall in its first-quarter vaccine output caused by a glitch in its European supply chain.

“There are currently insufficient data available to assess the vaccine efficacy from 65 years of age,” the German committee, also known as STIKO, said in a draft recommendation made available by the German health ministry on Thursday.

The European Union approved a vaccine developed by Pfizer and its German partner BioNTech in late December and gave the green light to a shot made by Moderna in early January, both based on so-called mRNA technology.

The bloc’s drugs regulator, the European Medicines Agency (EMA), is due to issue a recommendation on AstraZeneca’s vaccine, co-developed by Oxford University, on Friday.

STIKO said that, apart from the age caveat for the AstraZeneca product, all three were equally suited for use.

Its assessment was based on the same trial data published by medical journal The Lancet on December 8.

On Monday, the drugmaker denied that its COVID-19 vaccine is not very effective for people over 65, after German media reports said officials fear the vaccine may not be approved in the European Union for use in the elderly.

A person with knowledge of EMA’s regulatory procedures said that the watchdog – while set to state a positive risk-benefit ratio overall – will likely point to a lack of data on the elderly and leave it up to member states to decide whether to omit or include that demographic in their immunisation campaigns for now.

“I don’t think there will be restrictions by age group,” the source said.

Only 5.7 percent of the 11,636 trial participants included in the analysis were 65 years or older, data released by STIKO showed.

Within the older cohort, one of 341 vaccinated people and one in a control group of 319 people without the vaccine became infected with the coronavirus, making a statistically reliable conclusion impossible.

AstraZeneca Chief Executive Pascal Soriot said the company had less data than other drugmakers on the elderly because it started vaccinating older people later.

“But we have strong data showing very strong antibody production against the virus in the elderly, similar to what we see in younger people,” he told Die Welt newspaper in an interview earlier this week, referring to blood analysis.

AstraZeneca on Thursday said the latest analyses of clinical trial data support efficacy in those over 65.

“We await a regulatory decision on the vaccine by the EMA in the coming days,” it added.

Spahn said there were younger age groups with existing conditions who were waiting to be vaccinated, adding the final recommendation on the use of the AstraZeneca shot would only come following EU approval.

As well as those aged over 80 and people living in senior citizens’ homes, Germany is prioritising front-line medical and care staff.

In late December, the UK became the first country to approve the AstraZeneca vaccine.

The government said at the time it would not recommend one vaccine over another for different cohorts of the population, even though data on the AstraZeneca shot’s efficacy in older people is currently limited.

Even though there were too few infection cases observed in late stage trials, prior blood analysis on immune responses were “very reassuring”.

It began rolling out the vaccine in January in a campaign that has targeted older people and seen more than seven million given their first dose.

The UK has also been using the vaccine developed by Pfizer and BioNTech. 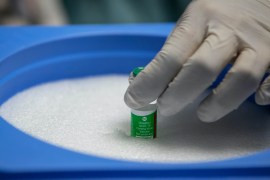 Spat between AstraZeneca and the EU raises concerns about vaccine nationalism, as nations jockey for limited supplies. The jab is the third granted emergency use in the Gulf country after China’s Sinopharm and Pfizer/BioNtech. Hungary moves to secure doses of UK and Russian-made vaccines despite lack of green light from EU’s medicines regulator.